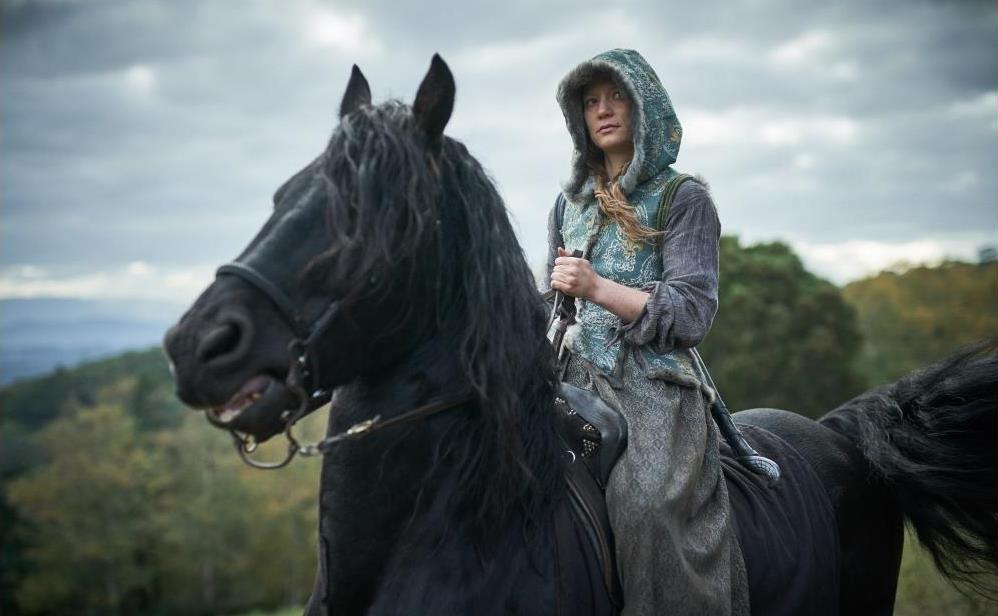 Percussive, jaunty and echoing with a mischievous air: that’s how Judy & Punch announces its arrival. François Tétaz’s lively score kicks in immediately, before the usual production company and funding body logos have even rolled off the screen — and its bouncy sounds couldn’t better set the tone for Mirrah Foulkes’ delightfully dark, fairytale-esque affair. Swelling with strings, humming with voices, and feeling equally impish, anarchic, gothic and operatic, it’s a distinctive piece of music, as befitting the distinctive movie to follow. That the thuds, beats and bangs reverberate loudest really shouldn’t come as a surprise, especially given the film’s inspiration.

Making the leap from actor to debut director and screenwriter, Foulkes gives the famed Punch and Judy puppet show the kind of smacks and whacks usually doled out by the first of its titular marionettes. Charged with layering flesh and blood over a commedia dell’arte tale usually told using wood and string, not only does the feature first-timer twist elements of the traditional slapstick display into a live-action narrative, but she also provides the whole production — and, crucially, the violence that it’s known for — with a fictional origin story. Foulkes’ focus is made plain in the movie’s inverted moniker, which no longer pushes Judy into a mere supporting role. For centuries, Punch’s outbursts have taken pride of place, garnering much dubious amusement; however that’s not the case in this decidedly feminist and timely interpretation.

When Judy & Punch opens in the 17th-century town of Seaside — a locale that, the film takes pains to point out, is definitely not by the sea — Punch’s (Damon Herriman) loutish ways are a given. So is his upper hand in his marriage to Judy (Mia Wasikowska), his estimation of himself as an artist, and his view that his genius (and gender) justifies his boozing, womanising, lying and indifference as a father. Foulkes questions this status quo from the outset, showing Judy’s nimble-fingered contribution to the pair’s puppetry. Of course, as the crowd roars, Punch still takes the credit. Next, Foulkes tasks her heroine with doing some overt questioning herself, asking Punch why he’s been dialling up the physicality in their performances. ”They like punchy and they like smashy,” is his response, taking refuge in the easiest of excuses: that he’s just giving the audience what they want.

As simplistic as his rationale proves, Punch isn’t wrong. A small hamlet where superstition reigns supreme, where the local police officer (Benedict Hardie) is thought of as an experiment, and where women suspected of any wrongdoing are cast out as witches (if they’re lucky) or stoned to death (if they’re unlucky), baying for blood is as natural as breathing in Seaside. Failing to stay on the straight and sober in such confines — even after promising he’ll do so to further his career and get them to the big smoke — Punch eventually stretches Judy’s patience too far. While it’s his worst display of savagery yet, he plays the victim to all who’ll listen, publicly blaming their elderly servants (Terry Norris and Brenda Palmer) for his misdeeds. But after being robbed of her family, left for dead in a shallow grave and ultimately rescued by a camp of fellow female outcasts, Judy isn’t willing to let Punch’s latest transgression go unpunished.

Tétaz’s score bursts in frequently, liberally sprinkling its roguish, irreverent strains — although even if it didn’t, Judy & Punch would sport a playful air. Foulkes isn’t afraid to show the extreme violence that surrounds Judy, or that Punch and the townsfolk deem a basic part of life, but representation isn’t the same as endorsement. Rather, as Jennifer Kent did in the similarly revenge-soaked The Nightingale, Foulkes depicts swirling viciousness in order to dissect its source, significance, influence and impact. It might seem incongruous to wink, nudge, probe and unpack all at once, particularly where subjects such as domestic abuse, dead babies, mob rule and misogyny are involved; however the film stresses an obvious fact: that even recognising the abhorrent treatment of women at the hands of men and the masses has historically been considered subversive.

An overly obvious climactic speech aside, Judy & Punch glides along its tonal rollercoaster with flair, but it wouldn’t do so quite as well without its stars. While Foulkes has penned a smart, savvy and witty script, and assembled a stellar technical team to help bring it its sometimes surreal, sometimes grotesque detail to life  — cinematographer Stefan Duscio (Acute Misfortune) and production designer Josephine Ford (TV’s Picnic at Hanging Rock), most notably —her film rests on its commanding and committed central performances. Amassing an admirable array of challenging roles since she came to fame in 2006’s Suburban Mayhem, Wasikowska exudes both warmth and resolve, two traits that aren’t often allowed to sit side-by-side in so-called “strong female leads”. Fresh from stepping into Charles Manson’s shoes twice in Mindhunter and Once Upon a Time in Hollywood, Herriman is more brutish and devilish here than he was playing a notorious serial killer. If that last statement sounds a little gleefully off-kilter, well, that’s Judy & Punch’s wavelength.

This review of Judy & Punch was published to coincide with it’s opening night film slot for the Brisbane International Film Festival, October 3–13, 2019.