Emu Runner is a quiet film of a child dealing with grief and her bond with the emu, nguri told with the Ngemba girl from Brewarrina in NSW.
Mel Campbell 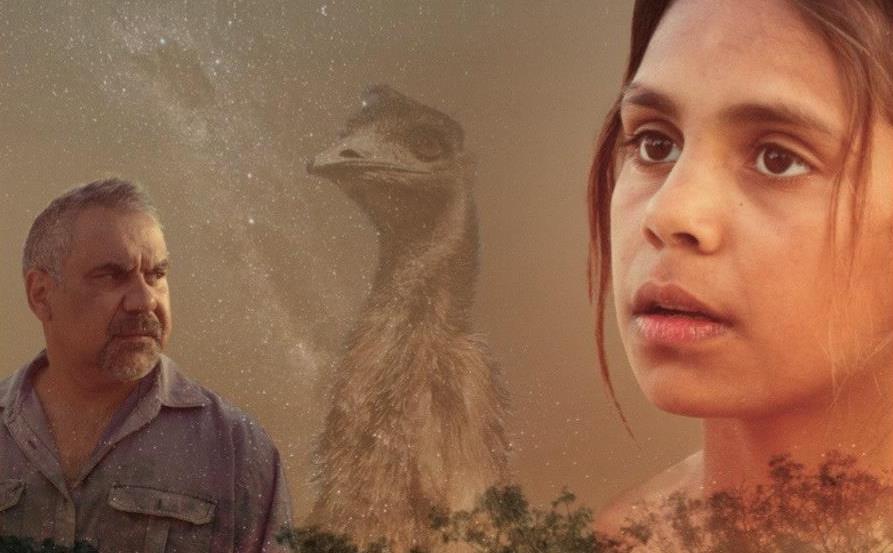 There’s something about emus. Their long legs and dinosaur feet. Their soft, downy feathers. Their intelligent eyes, the red-brown colour of strong black tea. It’s the male emus who build and sit nests, caring for the striped chicks while the fierce females roam free.

‘Nguri’s our animal,’ Darlene Daniels (Maurial Spearim) tells her two daughters as Emu Runner begins. ‘That’s what connects us to this land, your people.’ Darlene dares her youngest child, nine-year-old Gemma (first-time actor Rhae-Kye Waites), to chase an emu and catch its tail-feathers. Gemma’s a talented runner, but she’s not quite quick enough. ‘Almost’, her mum says. ‘Maybe next time, eh?’

Blair is well known as a writer, actor and director, and he anchors the largely non-professional cast with a hugely sympathetic performance. Jay Jay is a decent dad doing his best to hold the family together – with the help of his own mum, Daphne (Waites’ own grandmother Mary Waites) – but he struggles to guide his kids through their grief. Val retreats into crocheting; Ecka loses himself in alcohol and drugs, and pursues an unsuitable girl, Susie (Coco Daro).

And serious, fleet-footed Gemma becomes obsessed with the emu, nguri. At first alone, and then with her loyal sidekick Tessa (Stella Carter), she wags school to visit the clearing where she spotted a wild female bird, experiments with how to mimic its percussive call, and feeds it on sandwiches, stolen fruit and veg, cat kibble and even rose petals. But she’s really nourishing something in herself – a connection to her mum.

There’s a long tradition of films about kids who bond with animals, from the emotionally devastating Old Yeller (1957) and Kes (1969) to the uplifting Free Willy (1997) and Belle et Sébastien (2013). Many of these stories come from beloved children’s novels – for example, Mary O’Hara’s My Friend Flicka has been adapted to film in 1943, 1955 and 2009.

Emu Runner occupies a thematic space somewhere between Storm Boy (1976, remade in 2019) and Rabbit-Proof Fence (2002), between lyrical Bildungsroman and social commentary. Its observational cinematography beautifully evokes the way its resourceful heroine gets solace from nature. Michael Gibbs’ camera notices swallows in their mud nests beneath eaves; raptors silhouetted against the sky; an ominous willie wagtail; a cheeping magpie-lark; an emu feather tangled in wild grass.

This is also a feminine film, and the colour palette blushes pink, whether it’s the outback sunset, the soft knits, dresses and leggings worn by the female characters, or the Daniels family’s pink fibro house. “You wouldn’t understand,” Gemma tells her exasperated father.

And because this story is told from a child’s perspective, its social critique is gently served. Thomas wrote the film in close collaboration with Ngemba woman and Brewarrina community leader Frayne Barker, with whom she’d previously worked on the short film Mixed Bag (2008); and while it carries a deep respect for Indigenous culture and kinship, it’s also fraught with racial and class tensions that are clear even when they’re only allusions. Thomas lingers, for example, on the new cars, nice houses and lush green gardens of Brewarrina’s white residents. Tessa’s mum (Stella Carter) always looks a little uncomfortable to see Gemma.

The most dangerous thing about Gemma’s truancy and pilfering spree is that it brings her to the attention of the white authorities: local policeman Stan (Rob Carlton) and earnest young social worker Heidi (Georgia Blizzard). Preoccupied with her emu, Gemma sees her father and brother getting into fights, but doesn’t realise how this will look to Stan and Heidi.

But Uncle Wes (Waites’ real-life grandfather, Lindsay Waites) quietly notices what’s going on with Gemma. Having chased and caught an emu in his youth, Wes shares his knowledge of both emus and running; he takes Gemma to watch a father emu on his nest, and shows her a traditional message stick used to communicate over long distances.

Emu Runner, like its heroine, is a quiet gem. Its simple and satisfyingly realised themes of family and identity will appeal to kids, who won’t mind the occasionally clunky line readings. Even this jaded adult critic was moved to tears by Darlene’s death scene, only minutes in. By the end of the film, the knowledge of Country Gemma has learned, as well as her running skills, will be her solace and her salvation.