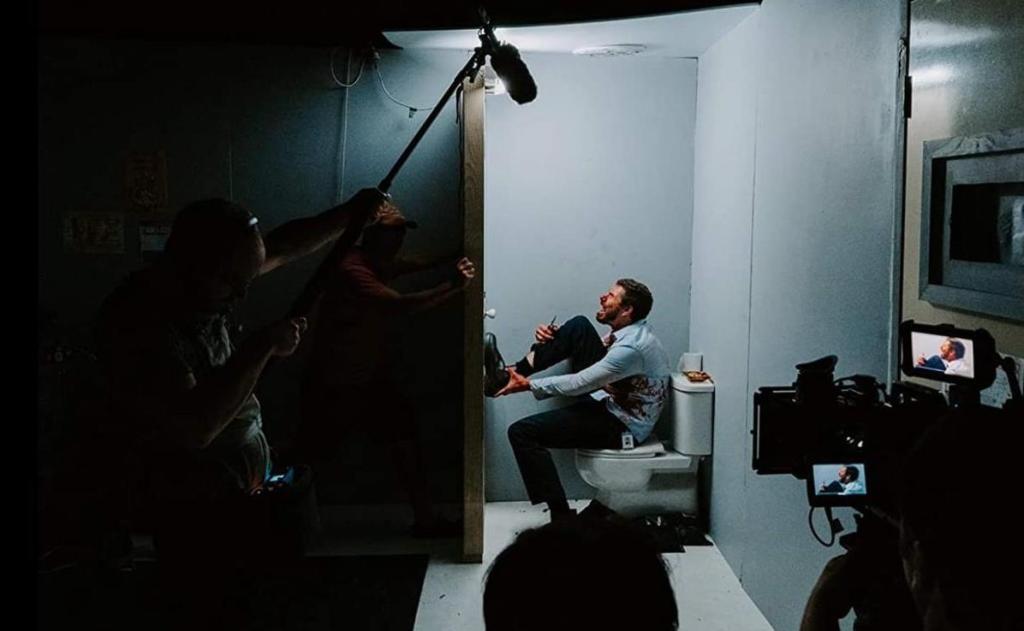 Shooting Matt Zampala’s The Guard Station, to be run in the Gothic Shorts program at Revelation. Image: IMDB.

Starting in 1997, Revelation Perth International Film Festival evolved into the most hardcore arthouse film festival in Australia. It tends to be seen as a curiosity at the edge of the world because it remains so strongly attached to Perth, run by a great local gang along with Richard Sowada and Jack Sargeant.

Sowada’s description of just one film in the 2021 program gives you the flavour. ‘The Monopoly of Violence is about state- owned power through the police and surveillance,’ he explained on the phone. ‘The form of the documentary is really cinematically amazing.’

‘The comment is really real and authentic,’ he went on to say. ‘And I think that’s the thing about the program overall – we always aim for authentic voices in dialogue. We take a strong editorial stand in the the festival, across the board, which is a little bit unusual for festivals generally.’

Festivals across the world are becoming a different kind of beast, pushed along by the pandemic and online presentations, by developing a feature slate, becoming markets and embracing the digital forms of XR. With over 35 features in a relatively small city, Revelation has committed to executive producing four short films per year with the local City of Vincent and curating a separate event in September called XR: WA. The vision for the festival is a lot spikier than your average mainstream film experience.

Sowada is determined to promote two new Australian low budget films that he believes are important. The Neon Across the Ocean is made by Filipino-Australian Matthew Victor Pastor, who sets his film in ‘After the crisis of 2020 – the not-too-distant future.’ It is the first in a trilogy about the pandemic, with A Pencil in the Jugular following it quickly. Since Made in Australia in 2013, Pastor has made 8 feature films and 8 shorts.

The Neon Across the Ocean tells the story of Mandy, ‘a 17-year-old Filipino Australian. In her final year of high school and dealing with her parent’s impending divorce, she navigates a world driven by a new normal of isolation and fear. Added to this she has a crush on her tutor Serena. Meanwhile, a young girl from the backstreets of Manila tells her story.’

‘He’s got such a great style,’ said Sowada. ‘It is really being distilled quite beautifully. Working in the Philippines, bringing that culture and nationality and sense of place into Australian cinema is really something to watch. There are no holds barred and he is unconstrained by the environment around him. He just makes these movies, and a lot of them. And that kind of spirit is really commendable and it is coming through in the work.’

Also on the program is horror film We’re Not Here to Fuck Spiders, written and directed by Josh Reed, produced by Rob Gibson and Sarah-Jane McAllan. According to IMDB, ‘Ice dealer Anton Berger and his crew go about their daily lives, working towards a potentially lucrative home invasion robbery with corrupt cop Det. Sgt. Gordon Godfrey, unaware someone has broken into their house and rigged it it with hidden cameras.’

The world premiere was held at Sydney’s Night of Horror Festival in September 2020, which it won, and was reviewed by Cult Projections. It went on to the NOOGA Underground Film Festival at the Alamo Drafthouse in Winchester Virginia.

But, said Sowada, ‘It hasn’t really broken through into the festival circuit because it is just too hard. It is not a pleasing film – it is a very uncomfortable film – as is The Neon Across the Ocean as well. They are demanding on audiences, that is for sure, which is really great. The whole idea of working through Covid is boiling things down into essential elements with no frills. I think they have grabbed that idea of minimalism really well, and that puts Josh Reed in front.’

The film was made as a set of improvisations, with the Mike Leigh touch of creating tight characters and pitting them against each other without ever telling the cast the story. The process is detailed in a podcast with Cinema Australia preserved on Soundcloud.

It takes a certain amount of nerve to venture into schlock cinema and super-minimalist low budget ‘rinse-and-discard’ auteurism, and then investigate them as film art. It is certainly a test of curatorial skill. But Sowada has his reasons.

‘We’re Not Here to Fuck Spiders is so tense and tightly wound that it’s phenomenal to watch. It is a really great thriller and the idea is awesome as well – absolute bare bones, no budget type filmmaking but really super high quality and really gripping work. By singling those two things out, we can show Australian independent filmmakers who want to work outside the system and can’t figure out how – well, here you go. Here are the shining lights just from this year.’

Echoes of the past

Josh Reed is the son of Melbourne architect Dimity Reed and writer/director Colin Eggleston who made legendary 10BA pictures Long Weekend and Cassandra between stints of writing and directing television. His first film adventure was Fantasm Comes Again from a script by Ross Dimsey, writing as Robert Derriere. At the time, they thought the whole thing was a) sexy and b) funny.

The festival runs from 1-11 July, and tickets can be purchased individually or as passes.

Here is the trailer for the original version of Long Weekend.