Daley Pearson, from his heart, showing the soul of Bluey

In his usual modest way, Daley Pearson pondered the idea of an Australian story, on the edge of launching Bluey.
David Tiley 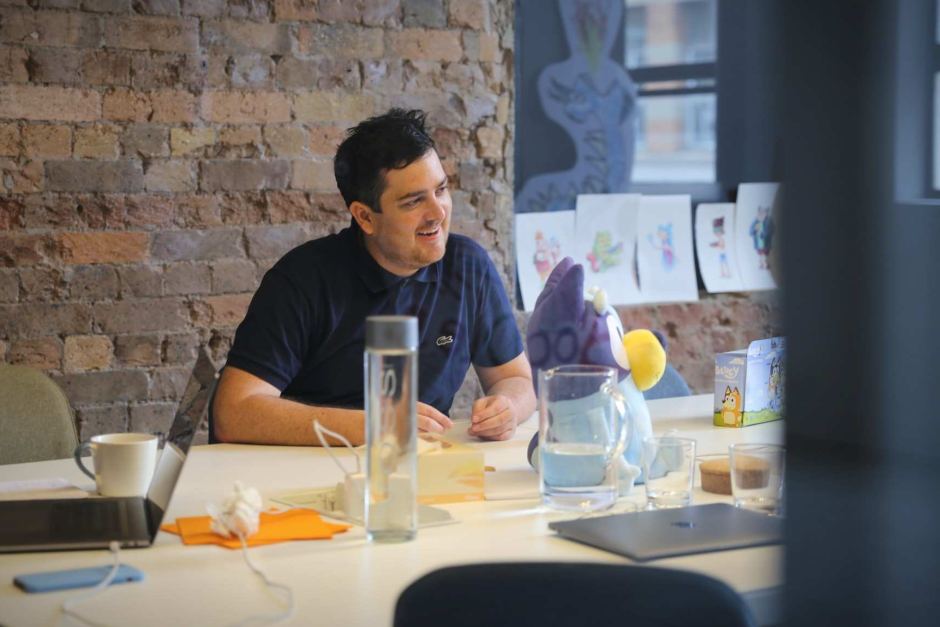 Daley Pearson in a 2019 meeting, according to the ABC

In July 2018, Daley Pearson, Director and Co-Founder of Ludo Studio, spoke at an event created by the Australian Film Television and Radio School on the question of Australian Story. He was already a comic success, on the verge of a cultural triumph with Bluey.

I found it sleeping in the archives, and we are republishing it because it now makes even more sense.

‘Before I even begin….

… there’s people in this room – Richard Harris, Debbie Lee, Michael Carrington, Sally Caplan from public broadcasters and government – who all enabled me to do what I’ve done in whatever career I’ve had.

I’ve really struggled with this: what is ‘Australian stories’?

I think an American story is about someone who wants something. They go out to get it, and more often there’s a struggle, but mostly they get it and that’s the end. And it’s great. I loved it.

But to me an Australian story feels like it starts with people who got what they want. I mean, Muriel did get it, but then she was, ‘what now? What’s all this for me?’ and I think the third act of an American film, getting it, is actually the second act of an Australian film, where they get it and how then do they find satisfaction within themselves?

But anyway, to find out what is an Australian story I thought I’d tell you a bit about myself.

And that’s where I grew up, that’s where I feel I was shaped as a storyteller and why I wanted to make films. Growing up in Queensland was fun but I also grew up loving films. My favourite films were Stand By Me and The Exorcist and Rear Window. I saw films far too old for me.

I loved them, they shaped me. I loved Indiana Jones, I loved the Ninja Turtles. I had pictures of Jim Carrey, The Mask, on my wall. I even dressed as the Riddler. My idols were John Lennon and Michael Jackson. My brother was my idol too but he wasn’t a public figure.

Literature and music grabbed me as a kid. But Paul Jennings, Paul Kelly and kids’ TV in Australia hit me like no other.

But I didn’t really see stories about my grandmother, or my mother or really, women.

I didn’t really see them growing up. I didn’t see stories by people like Dylan River, I didn’t see stories by people like Taika Waititi. I am now. And I don’t know if I chose not to look at them, or they just weren’t there yet because they weren’t given opportunities to make films. And anyway, before I learnt all this I thought, ‘I’m going to make films.’

…. to my first feature

That’s what I took out with me to my first feature, which was about a squid in the Brisbane River with Josh Wilson. Nothing happened with it. It wasn’t Australian and it didn’t really feel even me, to be honest. Maybe that’s why nothing happened with this film because I do think Australian storytelling, or good storytelling, is authored. And that doesn’t mean by one man or woman.

Authored means a story that’s from the gut. I made the first thing sort of properly when I was 24, called The Strange Calls for the ABC. It was based on my time I lived in Coolum Beach, where the second biggest monolith in the world existed, and I worked in an overnight shop just serving customers. It was crazy.

While somebody was saving the world, they had their own problems, and I remember Brendan Cowell said something like, ‘What is an Australian story, or what’s an Australian?’ And he said, ‘Well, if a dinosaur was going down the street, Americans would do something. They would become the hero of that story. Whereas an Australian would say, someone’s gonna do something about that. What are you up to today?’

And I think that  is it. It’s owning that margin. And Strange Calls was with Barry Crocker. I’m teaching him how to text and I got to hear about his stories with Barry Mackenzie, with all this amazing stuff growing up that I really missed out on. Strange Calls, funnily enough, had an American remake. I would love to tell you for ten minutes what I think was wrong with it, but it was because they were all the heroes in their own story, and they were.

They were square jawed, slightly famous heroes, and it didn’t work. And I think that’s really important – it was just my first case of an American trying to own an Australian story and the consequences of that.

We jumped into digital storytelling and that’s where my decision opened up, my mind opened to start not caring about growing up to be a famous feature film writer-director, to be blah blah blah. I just wanted to make stuff with Australians, and this was the first show that was a digital show, which was collaborative. We made an episode of TV in a week, and I got to meet audiences and hear from them.

They said things like, ‘Last night’s ep was shit as.’ It was a very open forum. And then I started moving into kids, and I got to make stuff with children. And because – I think this is really important to make stuff here, because this is where Australian filmmaking and stories got me. They lost me at about 13, but before that they had me like nothing else.

And I’ve dedicated myself to this, to telling stories to kids, about kids, and this is my second act. To go through it I was roommates with Thor. This empowered me to be a weird Australian guy, not change my accent and still exist, again, in the margins of someone’s bigger story.

And that has really given me confidence to go onto our new projects, which are super Australian stories, that aren’t for kids, that are about real families. Bluey is about an Australian cattle dog family. Kids will hear the accents, and this one is – this one is a genre where these kids want to be superheroes and I watch a lot of Cartoon Network, where the kids get to be the superheroes, whereas in this show I thought it was really important that kids behave like kids in this world, and they talk like Australians. And it also showed the diversity of Australians.

And it was really important to me that these kids aren’t the heroes in their own story I guess, but they’re real and within a genre, and that’s where I would really love to go with my Australian storytelling – to not ignore genre. I love genre and I love international stories.

But I want to make those stories authored and very real for me and I also want to help other filmmakers around me make those stories with voices I didn’t hear growing up, like the women, and like minorities. These new projects we’re working on now, I’m so excited by them. I get to collaborate with someone like Dylan River, Beatrix Christian [who wrote Jindabyne and co-wrote the Picnic at Hanging Rock series] and Rackaracka whose voices I never heard growing up.

And to me this is what exciting about the future – I’m still going to tell my stories about a guy, a white guy, early thirties, but I hope it has a different perspective from what everyone else sees, because I am Australian and I really am so lucky I get to work alongside these guys and women to tell their own Australian stories.

I guess the answer to the question ‘what is an Australian story?’, I think it’s authored. I think that’s what it is. I think whoever it is telling the story, I feel like I love the stories that are authored and from the gut.

Whatever genre it is it is a real story from a real person. And now that’s the end of my talk. But I really appreciate you having me today and hopefully I’ve spread some light onto this. Thank you.