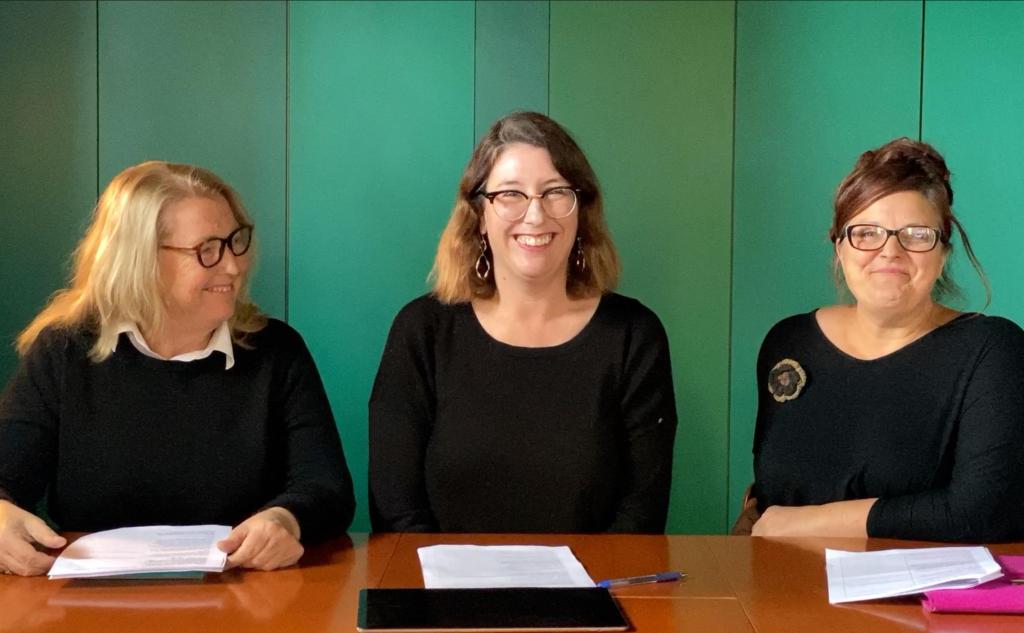 The winners of the 2020 Lottie Lyell Award were announced today, with three South Australian women filmmakers sharing in $30,000 to develop their screen projects.

Now in its second year, the South Australian Film Corporation’s (SAFC) Lottie Lyell Award has expanded by $10,000 from its initial $20,000 in order to fund two additional projects, chosen from a pool of 26 applications.

It’s not a huge pool of cash, but it will certainly shine a light on three fascinating sounding female-led projects from creators who’ve already proved themselves and deserve more attention. There’s one animated series, a feature film and a documentary.

Animator and entrepreneur Fiona Percival received the major award of $20,000 for dont f with me, ‘a darkly comic animated series about ‘growing up girl in a dangerous world’, as four best friends navigate the wild beauty and dangerous perils of teenage life.’ The series is produced by Julie Byrne and Cathy Beitz, with Beitz also serving as co-writer with Percival.

The film is described thus: ‘Daring to dream she might one day learn to read, ageing immigrant grandmother Evthoxia finds herself in her granddaughter’s school on Grandparents’ Day and a new world of learning is opened to her.’

Cambodian-Australian filmmaker and multi-disciplinary artist Allison Chhorn has been on many radars this year with her dreamy and personal film The Plastic House shortlisted for the 2020 Sydney Film Festival Documentary Australia Foundation Award and currently screening at MIFF.

For the Lottie Lyell, Chhorn has been awarded $5,000 to assist in completion of After Years, ‘a documentary which follows a number of Cambodian families living across Australia, the U.S. and Cambodia, examining the inter-generational trauma arising from their experience as survivors of the Khmer Rouge regime.’

After Years is produced by Chris Luscri and Anastasia Comelli.

Congratulating all three filmmakers, SAFC CEO Kate Croser said: ‘The SAFC is pleased to support three such distinctive and original projects which celebrate the spirit of creativity and innovation that screen pioneer Lottie Lyell is so well known for.

‘Fiona Percival’s suite of projects demonstrates a clear vision of her audience and innovation in creating screen works which directly speak to them, and represent their world in a completely original way, and both Allison Chhorn and Madeleine Parry are talented filmmakers known for their incredibly thoughtful approach to their subjects, producing work which is moving, enlightening and compelling.’

More information about the winners and their projects is copied below from the release:

Fiona Percival for dont f with me

dont f with me is a darkly comic animation about growing up girl in a dangerous world. Punky, Goldy, Wicca and Bit$h are teenagers crashing wildly through their youth, partying and loving like there’s no tomorrow – because to them, there may not be one. As they take risks and push boundaries, delirious highs push up against the dangers of assault, bullying, midnight black depression and rage. But as they spiral into conflict with family, authority and each other, they take matters into their own hands to tell the world ‘dont f with me!’

Fiona Percival has been in the animation industry for over 25 years, from animating on Xena Warrior Princess in New Zealand, to working for Microsoft in Sydney, before being headhunted to be Lead Animator at Ratbag Games in Adelaide. Fiona has since worked in Adelaide at Resin, The People’s Republic of Animation, with Luke Jeravicus at Vishus, and at Rocketsquad for Kojo. Invigorated by the local film industry, in 2011 she wrote, directed and produced the animated short, Top Dog, which screened at festivals worldwide, followed by short stop motion dont f with me, which received multiple international awards. Fiona has worked and lectured at many animation studios and was senior 3D Animation lecturer at AFTRS from 2007-2012.

Daring to dream she might one day learn to read, ageing immigrant grandmother Evthoxia finds herself in her granddaughter’s school on Grandparents’ Day and a new world of learning is opened to her. However, Evthoxia’s family struggle to understand her unexpected behaviour. For Evthoxia, it will take courage to break old habits.

Madeleine Parry is the director of the Emmy awarded Nanette for Netflix and writer/director/host of the ADG nominated and awarded Maddie Parry series and Meatwork for the ABC. An autodidact storyteller across documentary, comedy and VR, Madeleine was selected as part of Screen Australia’s 2019 Talent USA delegation, serves on the board of Mercury CX and tells nuanced, vulnerable stories with incisive wit and warmth.

Allison Chhorn for After Years

After Years follows a number of Cambodian families living across Australia, the U.S. and Cambodia. Refugees from the Khmer Rouge, they are content to raise their families in relative peace and seclusion. However memories of the past resurface as traumas suffered by the survivors transfer involuntarily across the generations. Tensions arise as the younger members’ desire for autonomy and assimilation brush up against a hard wall of silence, one at odds with the challenges of an increasingly changing world.

Allison Chhorn is a Cambodian-Australian film-maker and multidisciplinary artist whose work explores themes of migrant displacement, trauma and the repetition of memory. Chhorn produced and edited the feature film Youth on the March (2017) and has directed numerous short films and documentaries including Close Ups (2015), Last Time (2018), The Plastic House (2019) and the forthcoming Blind Body. Her work has screened at Visions du Réel in Switzerland (Official Selection – Burning Lights International Competition 2020), the Sydney Film Festival (Official Selection – Documentary Australia Foundation Awards 2020), Adelaide Film Festival, OzAsia Festival, Festival ECRÃ in Brazil and in Peru, FELTspace, SASA Gallery and the North Bellarine Film Festival. She has previously been supported by the Helpmann Academy, Carclew Arts and Flinders University.

Read: Screen News in Brief: There is no courage without fear