Spicks and Specks’ live-audience return is music to my ears

Adam Hills says he can't wait to get back into the studio with an audience for the music and comedy show.
Silvi Vann-Wall 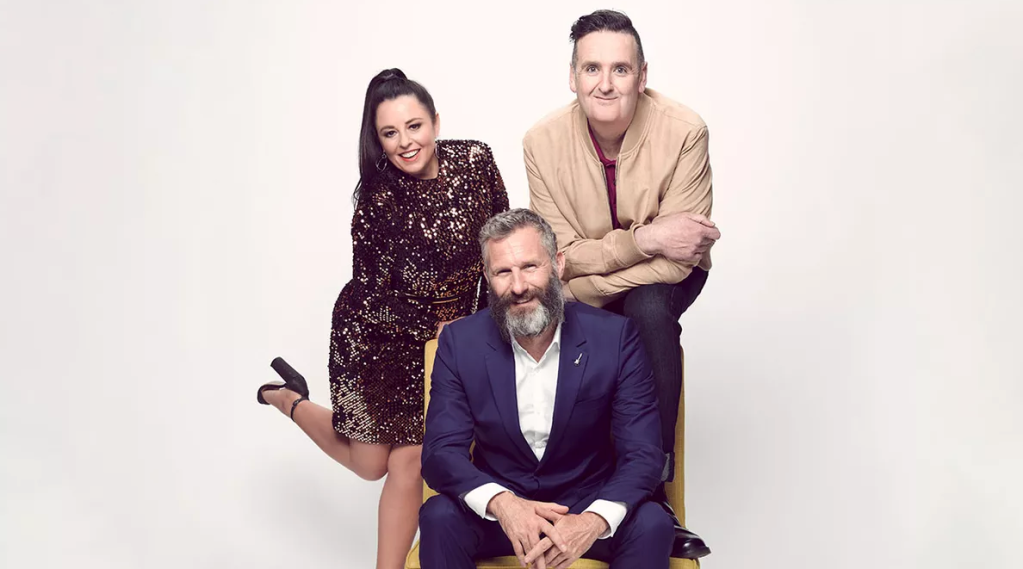 Spicks and Specks will bring back Adam Hills, Myf Warhurst and Alan Brough to our screens in 2022. Image: ABC

Starting from this Friday, filming will begin on a new season of Australian music quiz show Spicks and Specks.

The new season will reunite Adam Hills, Alan Brough and Myf Warhurst to do what they do best – test their obscure music knowledge and make guests compete in absurd challenges – this time with a live studio audience.

A version of the series ran last year with no audience, and guests participating via Zoom (thanks to the pandemic).

‘This will be the first time some of these musicians will have played live since 2020 so we’re thrilled to showcase them to the nation. It’s going to be another great series and I’m so excited for Australia to see it later this year.’

The showrunners have also teased ten ‘secrets’ that will be unveiled when the new series airs. At the time of writing, we have no clue what these ‘secrets’ will be.

My one wish is that the show continues its hilarious segment Substitute, where guests have to sing the tune of a famous song using only the words of a book as ‘lyrics’.

Registrations to be a part of the Melbourne audience went live merely days ago, with all spaces snapped up in a matter of minutes.

This alone goes to show the enduring power of a show like Spicks and Specks.

The show originally ‘ended’ in 2011, after seven years and 277 episodes. At its peak it was consistently raking in around 1.3 million viewers, but ended up being eclipsed by fellow ABC show The Gruen Transfer.

When the ABC noticed that Spicks and Specks reruns were outperforming new content, the broadcaster decided to bring it back – that is, three years later, and with an entirely different cast (Josh Earl, Ella Hooper and Adam Richard).

The reboot stuck safely to the show’s original formula but evidently didn’t quite live up to its predecessor. There was just something going on in the chemistry-infused original cast that is near impossible to replicate.

At last, in 2018, the original lineup of Adam, Myf and Alan announced they would do a ‘one-off’ special. This would be done as part of Ausmusic month. The panellists were rapper Adam Briggs, singer/songwriter Ricki-Lee Coulter and comedians Frank Woodley and Denise Scott.

This ‘one-off’ was a roaring success, bringing in 1.36 million viewers and skyrocketing to no#1 in the country.

Naturally, they returned for a few more ‘one-offs’ in the following years, and in 2021 decided to make a proper comeback – for which we are eternally grateful. There’s nothing like the real thing.

The new season of Spicks and Specks will premiere on free-to-air ABC later in 2022.