Mark Morrissey: key agent and manager, on his new direction

The hardy internationalist with Hollywood clients has announced his own production vehicle, First Option Pictures. His first project resurrects a forgotten Australian hero of the US Labor movement.
David Tiley 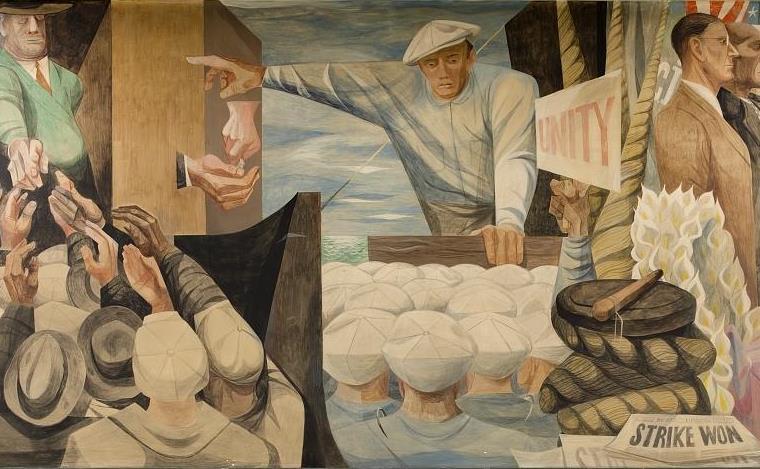 The Waterfront, a US mural by Anton Refregier with agitator Harry Bridges in the centre, painted in 1934. Image: Wikipedia, ultimately United States Library of Congress under the digital ID highsm.20866.

At the age of 62, after 33 years as a talent agent, with clients like the Hemsworth trio scattered across Hollywood, Mark Morrissey is entitled to slow down a bit. After all, he reads voraciously, and he is comfortably based in Sydney, surrounded by his family.

As he told Screenhub in an interview, ‘I’m feeling pretty positive. I have a whole range of new physical exercises, I’m doing various forms of clean eating and now I’ve got my daughters around me who are constantly updating me with new ways to keep myself healthy. So I’m in a very good place.’

Time to unleash an old ambition, which he has been easing into for a while as executive producer on projects like short TV series Molly, arthouse feature Boys in the Trees, the Stan Original series The Gloaming, and an international web series called Sarah’s Channel.

Now he is loose with his very own production company, First Option Pictures, with the predictable broad remit to ‘develop story driven projects for an international audience across multiple platforms.’ With him are Paul Currie as producer and expert financier Dominic Benvenuto.

First Option’s debut project is pretty extraordinary. It is a series called Radicals, with a pilot written and produced by Jonathan Shapiro, who was responsible for Goliath and Black List. It is about Harry Bridges, the greatest Australian political activist you have never heard of.  Born in Melbourne, he spent his life as a labor organiser in the US, leading strikes, threatened by jail and deportation, smeared as a communist and confronted by armed police. One of only four Australians who made the cover of Time magazine, he died at the age of 89, honoured by a park, a University chair and a Pete Seeger song in his honour. He is said to have never lost his Australian accent.

Read: I come from a land down under: Greig Fraser has a Mandalorian Emmy

Deciding on his first project

‘It is an absolutely stunning story,’ Morrissey said, ‘and I am blessed to champion this project.’ It arrived one weekend in a parcel of two books and three scripts. ‘It captivated me on the Saturday, and I re-read it on Sunday. I remember it vividly because I was in the house with my youngest daughter Piper, and I’m reading it and I’m placing sticky notes all the way through the book, magical moments you know, highlight moments. And I’m yelling, Do you realise what he did then? And look what happened here!’

Besides this visceral delight in the story opportunities and the quality of the script, Morrissey is also trying to place the project in its culture and time. ‘I’m trying to sense what the world is concerned about,’ he said. ’I’m trying to read into the news and the articles and the dinner conversations I’m having to get a sense of what is concerning us all. And keep myself open enough so that when the project comes along that inspires me and sparks a range of indicators to say to me this has a zeitgeist around it. This is something that’s going to resonate with with people.’

He thinks of himself as an Australian in a global environment. ‘I’ve been lucky enough to work with some of the finest agents and managers in America, and I was able to cherry pick their great business practices. So I think that time has influenced me and I brought those lessons back to here.’

A question of heritage

‘I’m deeply and fiercely proud of what I am, my heritage and my parents and my upbringing. If that helps me find my voice, so be it.’

‘I deeply respect my parents. They were working class people, they came from very simple backgrounds, they rented their houses all their lives. They certainly instilled in me a sense of myself. I was left to my own devices and it made me quite resilient.’

Mark Morrissey left school just after his sixteenth birthday and went on the road doing any job that he could find. ‘I had ambitions to be a mature adult,’ he said.

‘I’m deeply and fiercely proud of what I am, my heritage and my parents and my upbringing. If that helps me find my voice, so be it.’

‘I fell into an opportunity, an audition for the National Theatre in Melbourne and I was blessed to be accepted. I met an amazing human being, Joan Harris, who ran theatre and Joan completely changed my life. She taught me everything about the entertainment industry that a young 20-year-old could possibly learn, and she supported me throughout.’

By his late twenties, Morrissey leased his own theatre. Over three years he produced and toured over 40 projects around Australia. After that, he believes he had a good sense of producing.

He took that knowledge into talent management and grew Morrissey Management until he had a huge range of contacts and working actors around Australia and out to Los Angeles. While he expanded, key US talent representatives developed the art of packaging projects by which the writer and key creatives all come from the same agency. That power play has been fought ever since 1978.

It seems on the surface that First Option is this kind of gambit but Mark Morrissey rejects that notion fiercely. Instead he knows a huge range of managers, is a colleague of the whole craft in Australia and can pick up the phone in search of anyone. It is a powerful advantage, particularly because he insists he builds fair win-win deals.  We can expect him to understand the agent’s desire to brand actors in certain ways, and to deploy his reputation for identifying newer talent without a track record.

I asked him why Australians tend to succeed in Hollywood. He pointed to, ‘our training process in Australia, at either the drama schools or the extraordinary projects like Home and Away and Neighbours. They can’t be underestimated. The young actors get to work with some of the best actors, some of the best directors, but they’re working at a fairly fierce pace.’

When they are given their first break they arrive on set trained and with the experience that leads to other work. ‘We have the most advantageous model that I can think of,’ he said.

‘our training process in Australia, at either the drama schools or the extraordinary projects like Home and Away and Neighbours. They can’t be underestimated. The young actors get to work with some of the best actors, some of the best directors, but they’re working at a fairly fierce pace.’

‘Also we do have a sense of humour about ourselves, and we’ve grown up with American television all our lives.’ If actors are properly prepared before they get on the plane to Los Angeles or London, ‘then they’ve got expectations that can be managed. The trip may not work – this is not a short game, this is a long game that we all play.

‘Having the great support of good reps and good family and good friends around you will assist because it’s a fairly tough process.

‘The accents, obviously, are very important but again, it is fact that we’re listening to overseas drama, we’re listening to accents on our phones on our laptops, iPads, everywhere we’re watching the screen. So, there is a subliminal thing, but it all takes work, and you’ve got to get the flow right.’

Mark Morrissey sees First Option Pictures as a fresh start based on deep experience. Besides Radicals, he is overseeing the development of Colleen McCullough’s Carmine Delmonico series, and a more mysterious entity, No Quarter, by Andy Friedhof.

‘I’m doing what I feel I can contribute towards, and I feel I can add value to’, he said. ‘And I can surround myself with people that can do all the things that I’d like to do but they just do it better.

‘I come from a background of always admiring the hard work of people. I would say that’s an attribute that I look towards with people I’m work with and also the clients I represent.’