Leah Purcell has won the Jury prize for The Drover's Wife: The Legend of Molly Johnson at the 2021 Asia Pacific Screen Awards.
Rochelle Siemienowicz 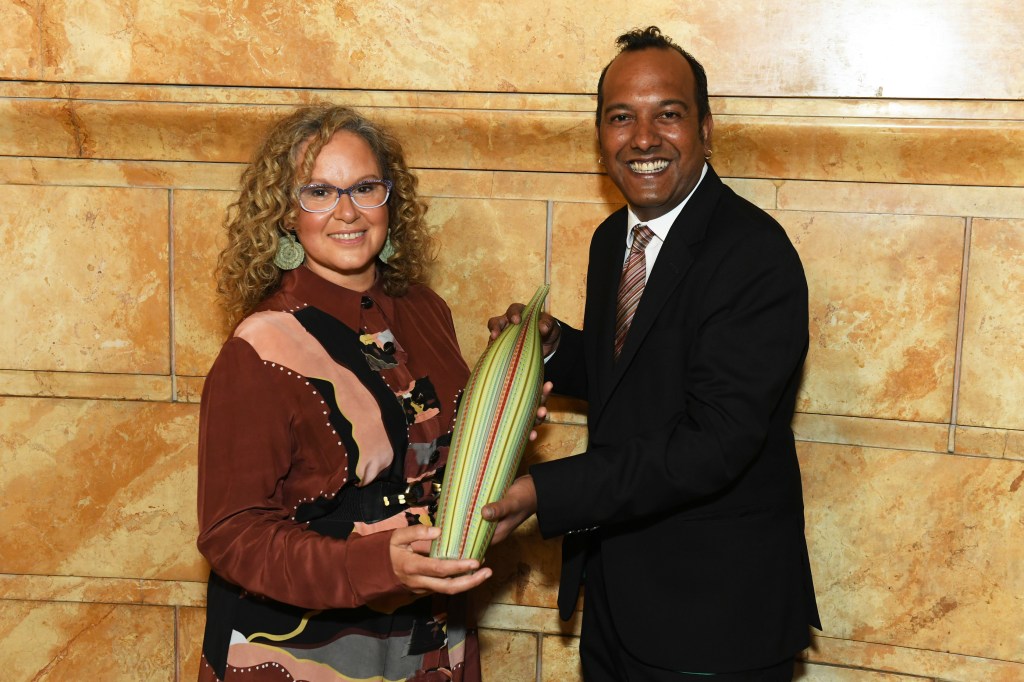 Purcell is the first Australian to receive the APSA Jury Grand Prize, which was presented to her by APSA International Jury member and Sydney Film Festival director Nashen Moodley.

The International Jury said that Purcell’s film represents ‘not only an artist’s total dedication to her craft but also a spirited act of courage and tenacity. The Drover’s Wife is a film that quickly makes its way into the heart, taking a well-known genre, and exploding it into a much needed story of survival, loss, and resilience.’

Screen Queensland’s CEO Kylie Munnich, announcing Purcell’s award, said, ‘Born-and-raised Queenslander Leah Purcell, is one of the country’s most influential and inspiring voices in the industry, and Screen Queensland is delighted to have invested in and collaborated with Leah’s company Oombarra Productions, to facilitate the creation of new, exciting and authentic First Nations screen stories.’

In accepting the Prize, Leah Purcell acknowledged the Elders of Yugambeh Country, Gold Coast before saying ‘Thankyou to the 14th Asia Pacific Screen Awards and their prestigious Jury for your recognition of my effort in making this film, the many hats that I wore and the voice that I had given it as a First Nations woman. Truly, thank you for this validation.’

‘As we know, filmmaking is a collaborative effort and I must thank and acknowledge my family Elders, Elders of the Monaro Ngarigo on whose Country we filmed, my cast, crew, Heads of Department, production personnel, producers, distributors, private investors and funding bodies for their tireless effort, expertise and experience, their trust and belief in me for wearing all of those hats, and actually pulling it off, because without them this film would not be possible.’

‘I also want to acknowledge my partner in life and business, and lead producer of the film, Bain Stewart, for his massive, tireless and unwavering effort, who stood beside me, supporting me fearlessly with determination and total belief in me and our film. Lots of love and respect to you. Without you I would not be here.’

Purcell finished in gungarri, her grandmother’s language, saying ‘Ma altjeringa yirra Baiame. Thanks to the ancestors for this very moment.’

The Drovers Wife The Legend of Molly Johnson was to have had its Australian premiere as opening night film at the 2021 Melbourne Film Festival, but has since screened at Brisbane and Sydney film festivals. It will release widely in Australian cinemas on May 5, 2022.

It’s still rare, though becoming less so, for Australian films and filmmakers to be considered alongside their Asian counterparts. The APSA Awards and screen conference go some way to reminding us of our cinematic connections within our geographic region. Previous Australian winners of APSA Awards include Rodd Rathjen’s Buoyancy, which won Best Youth Feature in 2019.

Vieira also welcomed those attending the 3rd Asia Pacific Screen Forum, which started yesterday, and has garnered an audience joining its accessible virtual sessions from as far afield as the UK, Japan, Vietnam, Thailand, Indonesia, New Zealand, Republic of Korea, People’s Republic of China and Mongolia, as well as across Australia, as well as in person on the Gold Coast.

The other Grand Jury Prize

Two Jury Grand Prizes were awarded in 2021 with the other going to Abdullah Mohammad Saad, director of Rehana (Rehana Maryam Noor), for ‘the precision of its filmmaking language which made it possible, by the only specific means of cinema, to detail the psychological and factual stages of a woman’s fight for justice and to reveal, in an absolutely remarkable ending, how she prepares her little girl to be courageous and to fight all forms of injustice.’

This is the second film from Bangladesh to be awarded the APSA Jury Grand Prize, after Mostofa Sarwar Farooki’s Television in 2013.

Iranian auteur Asghar Farhadi was awarded Achievement in Directing for A Hero (Ghahreman) which the International Jury called ‘an intimate epic’.

Achievement in Cinematography went to Nguyễn Vinh Phúc for Taste (Vị), with the film’s director Lê Bảo awarded the Young Cinema Award in partnership with NETPAC and GFS.

Best Performance by an Actor was awarded to Georgian actor Merab Ninidze for Alexey German Jr’s House Arrest (Delo) with the International Jury calling his performance ‘simply extraordinary in this biting satire on political repression.’

Best Youth Feature Film was awarded to director Yoon Dan-bi for Moving On (Nam-mae-wui Yeo-reum-bam, Republic of Korea) who acknowledged the common language of cinema in her thanks for the award saying ‘the fact that the cinema is still moving forward gives me the motivation to work on the next project.’

Best Animated Feature Film went to Andrey Khrzhanovsky’s The Nose or The Conspiracy of Mavericks (Nos ili zagovor netakikh, Russian Federation) with the Jury noting how the film stood out amongst the strong field of animated films with its originality, and clear and powerful message, and, skillfully realised with traditional animation techniques, yet with a post-modern twist.

Best Documentary Feature Film was awarded to Sabaya (Sweden). Filmmaker Hogir Hirori said ‘This award is not only an important recognition of everything that the ISIS survivors have been through but it also brings much needed attention to the fight to save the more than 2000 Yazidi women and girls that are still held captive by ISIS and reunite them with their families.’

The Cultural Diversity Award under the patronage of UNESCO is awarded to Sri Lanka’s Prasanna Vithanage for Children of the Sun (Gaadi). Despite many previous APSA nominations for Sri Lankan films, this award marks the first win.

Now in its 12th year, the fund was created to support the development of new feature film projects by APSA Academy members and their colleagues from the culturally diverse Asia Pacific region. The fund awards four development grants of US$25,000 annually, and is wholly supported by the MPA. In 2021, the four recipients are:

Leah PURCELL for The Drover’s Wife The Legend of Molly Johnson, Australia

BEST PERFORMANCE BY AN ACTRESS

BEST PERFORMANCE BY AN ACTOR

CULTURAL DIVERSITY AWARD UNDER THE PATRONAGE OF UNESCO

The Cultural Diversity Award under the patronage of UNESCO is awarded to a film that creatively utilises its medium to best exemplify the manifold ways in which a society’s cultural heritage and its artistic expressions are showcased.

YOUNG CINEMA AWARD IN PARTNERSHIP WITH NETPAC AND GFS

The Young Cinema Award in partnership with NETPAC (Network for the Promotion of Asian Cinema) and Griffith Film School (GFS) recognises the abundant emerging talent of the Asia Pacific.

Determined by FIAPF–International Federation of Film Producers Associations for outstanding achievement in film in the Asia Pacific region.

The 3rd Asia Pacific Screen Forum is now underway, with registrations and participation invited around the globe.