The state's biggest international production in a decade, 'La Brea' will see Melbourne double for LA in the story of a family separated by disaster.
Rochelle Siemienowicz 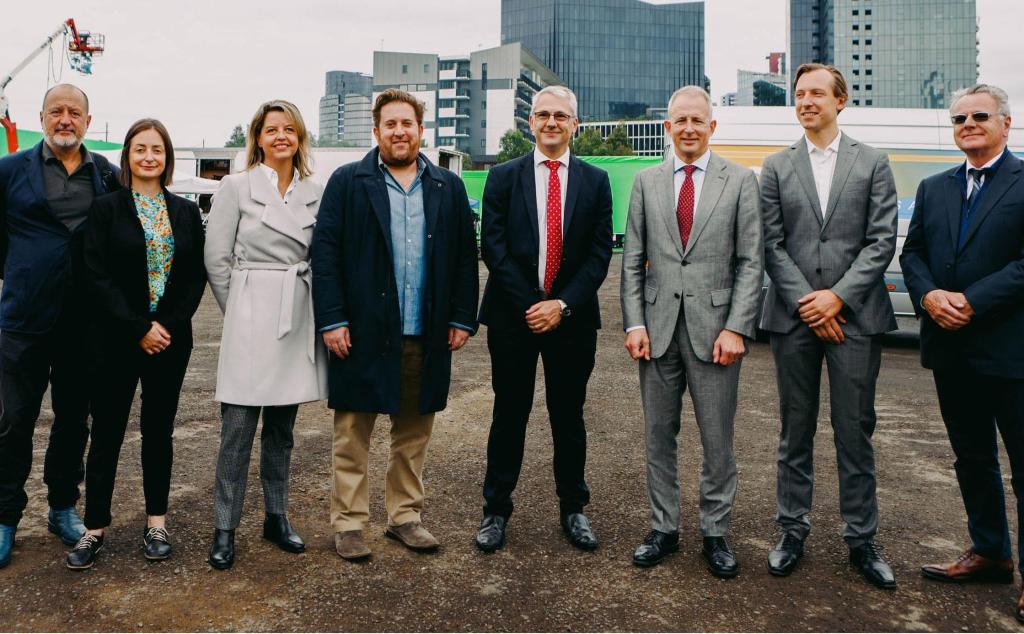 Jobs, jobs, jobs for the locals. That’s the dominant message around the latest announcement from Film Victoria, the Victorian State Government and the Federal Minister for Communication and the Arts, as principal photography commences on La Brea in Melbourne’s crowded Docklands studios and surrounds.

This is the biggest international TV production to visit the state since Spielberg’s HBO series The Pacific wrapped in 2009.

A photo op announcement around the new 10-part series, and all the jobs it’s creating, took place at Docklands yesterday (3 May) with as many agency reps and politicians as possible squeezed into one shot.

The high end, effects-heavy Universal Television drama series, with production overseen by NBCU’s local production arm Matchbox Pictures (Clickbait, Stateless), will see Melbourne double for Los Angeles, following a family’s survival after they are separated by a massive sinkhole that mysteriously opens in the city.

The shoot, postproduction and visual effects will take place in Victoria, with the project expected to inject more than $71 million into the Australian economy, more than $60 million of that in Victoria alone. According to the state government’s media release, La Brea will create work for around 295 local businesses, with jobs for 290 local cast and crew members and more than 1,000 local extras.

La Brea was secured for Victoria through the Victorian Screen Incentive, part of the Andrews Labor Government’s $33.8 million boost to the state’s screen industry announced last year. The production has also been backed by the Federal Government.

Victorian Minister for Creative Industries Danny Pearson said: ‘After a challenging year, our screen industry is well and truly back with a strong pipeline of projects now shooting across the state and more projects on the way, supporting Victorian jobs and talent. We have a long-standing relationship with NBCUniversal and we warmly welcome them back to Melbourne with their series La Brea.’

Federal Minister for the Arts Paul Fletcher said: ‘The filming of La Brea in Victoria will allow us to accelerate upskilling the next generation of screen industry professionals.’

The survival/disaster drama stars US actor Natalie Zea (The Detour, Justified) as a mother whose family is ripped apart when a massive sinkhole opens in Los Angeles, separating her and her son from her husband and daughter. The synopsis says: ‘When part of the family find themselves in an unexplainable primeval world, alongside a disparate group of strangers, they must work to survive and uncover the mystery of where they are and if there is a way back home.’

The series presumably takes its name from the La Brea Tar Pits, a Los Angeles tourist attraction built around an Ice Age fossil site in which the remains of extinct mammoths and giant sloths were trapped and preserved in naturally-occurring asphalt.

Alongside Zea, a cast of US TV actors including Nicholas Gonzalez, Eoin Macken and John Seda will be joined by Victorian actor Rohan Mirchandaney, making his US TV debut without leaving home.

Universal Studio Group and Matchbox Pictures will also partner with AFTRS on a training initiative dedicated to virtual production.

La Brea is one of four major television productions currently underway in Victoria including the Paramount Television and Apple TV+ series Shantaram shooting at Docklands Studios Melbourne; NBCUniversal and Matchbox Pictures series Fires shooting in Melbourne and regional Victoria for the ABC; and the Netflix/Werner teen series Surviving Summer shooting along the Surf Coast.

As NBC Television’s senior vice-president of production Richard Ross told Karl Quinn at The Age/SMH, the company’s production slate in Australia was ‘scalable’ and would be driven by its relationship with its local production arm, Matchbox. He anticipated it would ‘probably be three to four television series a year – that’s a lot of production. Each one would be $50-$70 million of spend, so close to $200 million.’

La Brea is expected to be fast-tracked for airing later this year.