The well-known actor and filmmaker has long been passionate about design and architecture. Now he's launching a content platform devoted to it.
Rochelle Siemienowicz 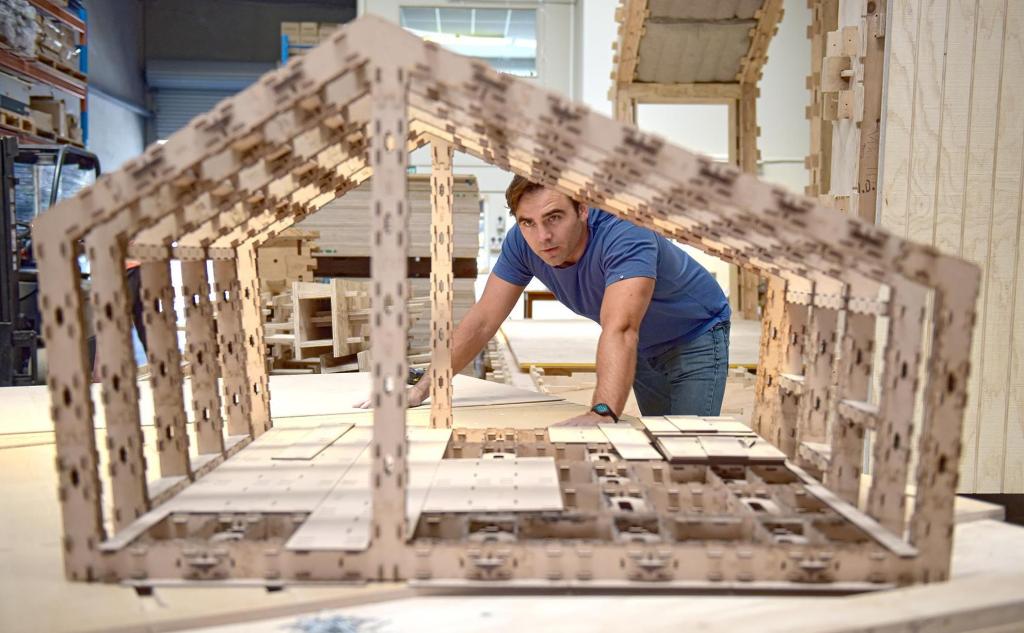 ‘How do you go from trying to find a home for your content, to being the home for it?’ Dustin Clare. Photo by Jim Lounsbury.

A confession: I used to be obsessed with Spartacus, the gore and glam of that ultra-violent super-stylish Starz series about gladiators. Shot in New Zealand, it  featured a host of buffed and beautiful local actors including Lucy Lawless, the late Andy Whitfield, Jai Courtney and Dustin Clare.

So when a press release came through about ‘Shelter’, a new streaming platform of curated content about Design, Architecture and Lifestyle, created by Dustin Clare. I had to wonder, was it that Dustin Clare?

Of course. Clare is already known far beyond the realms of his considerable acting career (shows like McLeod’s Daughters, Underbelly, Satisfaction, Wolf Creek and Pacific Rim: Uprising). He was was named one of SPA’s emerging producers in 2015 and his producing credits include The Meaning of Vanlife, as well as executive producing In Bob We Trust, Canadian documentary A Time for Making and US feature A Fighting Season.

Clare also chairs the board of Regional Australian film body ScreenWorks, based near his hometown of Ballina in the NSW Northern Rivers region, where he’s a vocal advocate for screen opportunities for people outside the big smoke.

But it’s Shelter we’re here to speak about. On the phone to Screenhub, Clare says the streaming platform, which launches at the end of this week, has been kicking around in his head for a while now.

‘I’ve been involved in film distribution and sales for quite a number of years with my company Fighting Chance Films. And we’ve been thinking about how you might skip that hurdle of distribution and sales, and become the broadcaster yourself, in a way. How do you go from trying to find a home for your content, to being the home for it, the last point of contact for the viewer?’

He says the advent of burgeoning internet-provided TV ‘has given us the ability to become a global broadcaster without having to buy part of the radio spectrum and pay millions of dollars each year.’

The main focus at the launch for Shelter will be the English-speaking territories.

Architecture affects us all

Clare has had an interest in architecture and building since he was a teenager. ‘I grew up on landscaping sites pushing a wheelbarrow for my father,’ he says. ‘And more recently, with my wife and kids and our family growing, we’ve needed to expand the house and find creative solutions. I really like being hands-on with carpentry and working with  friends who are carpenters over the years on our various projects.’

‘Architecture is something that affects us all. We all have to live under some kind of shelter, and that’s what the platform is too, a kind of roof under which all kinds of wonderful content can sit and be available to audiences who love to watch this kind of thing.’

‘We all have to live under some kind of shelter, and that’s what the platform is too, a kind of roof under which all kinds of wonderful content can sit.’

Shelter will start with over 200 hours of curated content from Australian, NZ, Europe, UK, Ireland, Canada, the US and South America. There will be feature films, television series, premium magazine content and exclusive originals. Clare is most excited about his own Shelter Originals project, the Inspired Architecture series of 6 x 15 minute episodes exploring uniquely Australian structures, all of which are ‘regional’ and isolated in their own ways. They include JR’s Hut in Gundagai, Permanent Camping in Mudgee, and Hart House at Great Mackerel Beach. Each episode includes interviews with the Architects and their commissioning clients, shot by award-winning filmmaking Jim Lounsbury (The Meaning of Vanlife – Stan, The Infinite Lens – NatGeo).

‘We’re really focused on the narrative with this series,’ says Clare, ‘not just the buildings. We want to know why they came to be, who built them, did they live up to the brief, and what were the challenges? And of course, who are the people in them now?’

Trying to shoot this material during the pandemic has had its challenges, and some things have fallen over. ‘Architects have said “yes”, and their clients have said “no”, that kind of thing influenced the selection. But in the end, the ones we’ve got are very inspiring and memorable buildings.’

Other highlights from the initial launch offering includes features like Homo Sapiens (2016), The Edge of the Possible (1998), Ken Roche: The Quiet Architect (2017), Tiny (2013), Harry Seidler: Modernist (2017) and Streets of Your Town (2015) with comedian and architectural enthusiast Tim Ross. There’s also TV series Charlie Luxton’s Homes by the Sea and Dream Build seasons 1 & 2.

Many of the offerings on Shelter have a focus on environmental sustainability and reducing poverty. The platform has partnered with Eden Reforestation Projects, a non-profit organisation established to reduce poverty and restore forests in countries devastated by deforestation. Each month, a tree will be planted to represent every subscriber to Shelter.

So how does Shelter fit into a crowded menu of streaming options? ‘There are a lot of entertainment services now, which is wonderful and we’re all spoilt for choices, whereas five years ago we had very little,’ says Clare. ‘But I think the next wave of services will be more niche, really focused on a definitive target audience.  For us that’s architects, home owners, renovators, design aficionados, people who have bought their first home and are thinking about ideas for what to do with it.’

A key part of financing has been the partnerships other brands, including global magazines Dwell and Green Magazine, and Shelter will host some of their premium content. ‘We’re moving from a still image, which has been the traditional content in a magazine, to the moving image. Clare says he’s also working with some other brands around bundling and it’s a staged approach.

The actual platform is being build by NZ tech outfit Shift 72. ‘They’re building our apps for the IOS and android stores. We’ve got more coming on later in the year, specific to certain territories.’

Has there been any funding investment or support from Australian screen bodies? ‘No.’ Clare pauses for a long moment. ‘You can read into that.’

He says he’s nervous but excited about the launch on Friday, and hoping for fast growth. Already since announcing the initiative he’s had content providers contacting him with more material from this ‘very loved but underrepresented genre.’

‘I’ve been lucky enough to have a really great career as an actor, and it brings relationships you can later lean on.’

How do you go about building a subscriber base for a new platform like Shelter? ‘The strategy has been around working with big established brands and their existing user bases, and that may be through deals and bundling, and leveraging those existing magazine audiences.’

It sounds ambitious, so what’s been the biggest learning? ‘I’m learning every day and it’s exhausting!’ he laughs. ‘There’s so much to learn from legals, to technical issues, and industry issues. I’m very lucky to have smart people around me who can contribute to it.’

Read: What’s up with DocPlay? An interview with Paul Wiegard

Which brings us back to acting. Are there transferrable skills from his high profile career in front of the camera? ‘Oh absolutely. The existing relationships. That’s how I was able to produce my first feature film and make sales. I’ve been lucky enough to have a really great career as an actor, and it brings relationships you can later lean on.’

‘I always remember Joel Edgerton coming to give a talk at WAAPA, where I was studying. He said, “You’ve got to go out and make your own stuff. You can’t expect it to always come to you.” And part of that is being a producer for yourself, picking up the reins and making the work happen so can keep performing.’

Although Clare probably sighs at the Spartacus reference in the title of this article, it is after all the thing that got me sniffing at the story initially, and that’s part of the business of relationships and awareness. He says he’ll definitely keep performing, if the roles and the timing are right.

Before we wrap up he’s keen to mention Screenworks, which is ‘very close to my heart.’

‘We’re a regional film body that provides screen opportunities for regional and remotely based Australians,’ he says. ‘We have a national footprint now, and have recently expanded our board, which some new member including Rhoda Roberts AO, Chris Oliver-Taylor and Rosemary Blight.’

Home and heart are very close together here.

‘I grew up in regional Australia and I know how difficult it is as a kid to try and have those opportunities. This is a way I want to give back and create more opportunities. And Screenworks is based in Ballina, which is my home town where I live and work too.’

Shelter launches Friday 31 July, with new content added each month. A free 14-day trial is available with a monthly subscription of AUD $7.99 and NZD $8.99.