Climate emergency cinema smoked out but not cancelled

The pedal-powered outdoor cinema event at Melbourne's MPavillion had the first of three screenings postponed due to poor air quality.
Rochelle Siemienowicz 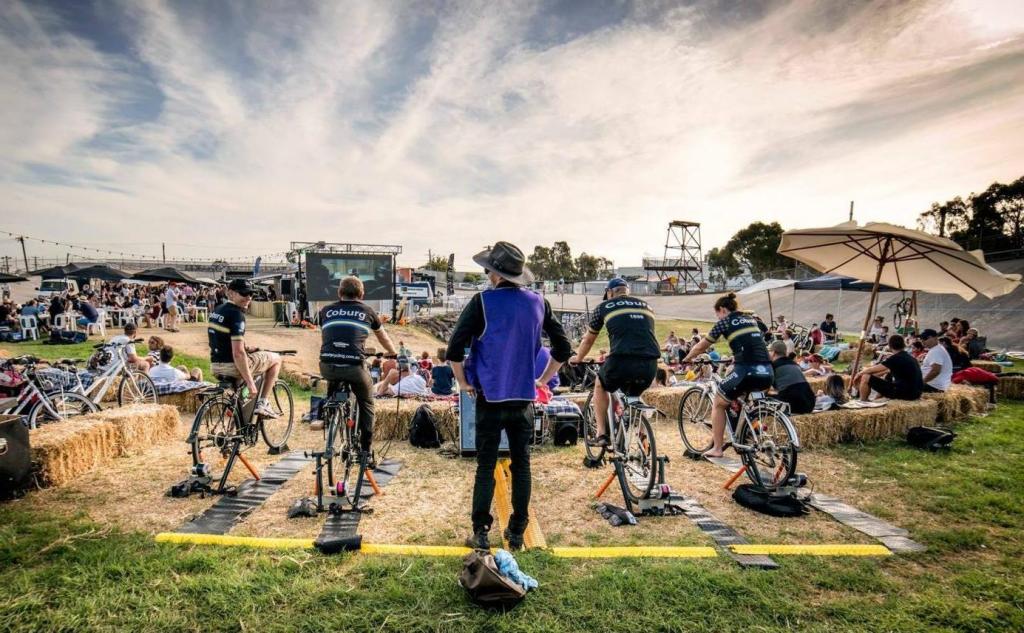 Planned many months ago as a series of three outdoor events at Melbourne’s MPavilion, Climate Emergency Cinema was intended as a celebration of grassroots action around climate change. But in a cruel irony, and proof of the urgency of its message, the first event on Tuesday night, a program of environmental short films, was postponed due to Melbourne’s hazardous air quality. Organisers are watching the weather and, smoke permitting, the remaining scheduled events will go ahead on Tuesday 21st and 28th January.

Co-curated by the Transitions Film Festival and outdoor projection event specialists Little Projector Company, the program of short films and award-winning feature documentaries, introduced by leading thinkers and activists, is designed to give audience members a chance to ride a bicycle and help power the screenings. But the dangers of riding a bike – or doing anything outdoors – this week in Melbourne’s choking bushfire smoke, meant  the cancellation or postponement of many of MPavilion’s free cultural events, from kids gardening crafts to morning meditations.
Speaking to Screenhub about the cancellation of the first Climate Emergency Cinema screening, Lee Ramseyer Bache from the Little Projector Company said: ‘It was unfortunate but in the spirit of resilience we are re scheduling the first screening to a TBC date. I can only think of war time anecdotes telling of anti fascists speaking on soap boxes in the public squares as bombs drop around them. The parallel of the mobilisation seen in WWII with the necessary mobilisation demanded by the climate emergency is now evident for all to see and breathe.’

Originally hailing from Leeds in the UK, Ramseyer Bache is creative director, general manager and one of the founders of the Little Projector Company which was established in Melbourne in 2010, as well as the associated film production company Light Works. He has managed numerous projector bike events for the likes of Vivid Sydney and the Gertrude Street Projection Festival, and says the setup is ‘basically a cinema on wheels: a projector and a battery and a sound system on a cargo bike, and alongside that you’ve got four bikes on rollers which are the pedal power system keeping the battery charged.’ For this event, the films will be projected against the MPavillion structure. It’s a fun and simple idea aimed at ‘looking towards solutions’ and ‘doing something positive around the climate emergency rather than simply being alarmist.’

Held annually since 2014, and situated in Melbourne’s Queen Victoria Gardens, the MPavilion is an architecturally designed structure commissioned by the Naomi Milgrom Foundation, and forming the focus of a free program of events, performances and workshops over summer. At the end of the season, the structure is gifted to the people of Victoria and relocated to a new permanent home. This year’s pavilion is designed by influential Australian architect Glenn Murcutt AO.

According to the MPavilion website, the initiative is ‘intended to spotlight Melbourne as the creative and design capital of Australia: with Melbourne as a world-renowned leader in liveability.’ Needless to say, that’s not a word that comes to mind living in Melbourne this week.

It may seem trivial to bemoan the loss of al fresco dining, outdoor events and summer fun in general, compared to the devastating loss of lives, property and habitat. But these things are part of the bigger picture as all we count the costs of the bushfire crisis to our health, happiness and prosperity, however you want to measure them.