While the Australian exhibition market potters along, the US streaming companies are consolidating even further.
David Tiley 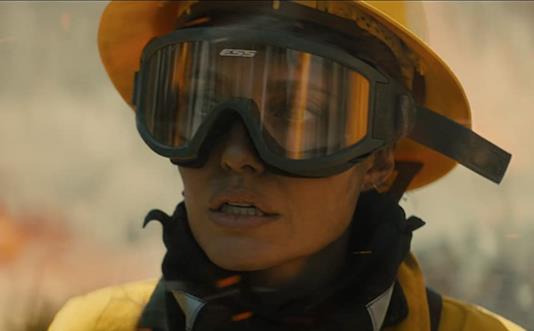 Angelina Jolie ignores her improbable makeup to act in For Those Who Want Me Dead, number one at the box office. Image: IMDB

By comparison, Penguin Bloom took $1.27 million in its second weekend. The inherent attractions of June Again’s television-friendly cast could help to close that gap.

Peter Rabbit 2 is inching past the $20 million mark with an extra $370,000 in week 8 so it won’t ultimately match the lifetime total of the original film, which took $26.8 million in Australia.

The UK release occurs right now while the US opening is on June 18.

There is a new top film in the release list, with Those Who Wish Me Dead (TWWMD), which made a modest $1.12 million off 333 screens. It is a wilderness pursuit story set in Montana led by Angelina Jolie, aimed squarely at the multiplex audience. In the US it launched this weekend in cinemas and on HBO Max at the same time, and has taken $3.6 million in the cinemas.  (All figures in AU$).

But in the North American market, TWWMD was solidly beaten by Spiral: From the Book of Saw, a Saw franchise horror film with Leigh Whannell and James Wan as executive producers in yet another iteration of their Australian-grown assault on the world’s nerves. It topped the charts with $11.3 million in week one, which was still several million down on expectations for a cult film with no streaming release.

The league table is built on the weekend take, not the total figures which reveal very different winners.Godzilla vs Kong has made $27.5 million, The Dry has $20.72 million, Peter Rabbit 2 has taken $20.44 million, Tom and Jerry has $10.12 million, Mortal Kombat has $8.68 million and Wrath of Man has taken $5.09 million.

It is worth looking at the relative figures for Wrath of Man and Mortal Kombat (MK) in the US because the latter film was shot in Adelaide. MK has taken $52 million in the US almost the same around the world so the total is around $100 million in three weeks off an estimated budget of a very tight $70 million.

Wrath of Man is not streaming in the US but Mortal Kombat is part of the Warner strategy of running both neck and neck.

The weekend total box office in Australia is pretty modest –  the top 20 took around $6 million, down around $500,000 on last weekend.

But the total box office in China for the weekend is only $68 million, while the $4.64 billion total take so far is a mere 10% under the equivalent period in 2019.

Top of the Chinese box office at the moment is Cliff Walkers, the Zhang Yimou 1930’s brave Communist spy story, followed by a corruption story Break Through the Darkness. So we have two regime hero films, followed by US action thriller Wrath of Man which made $11.1 million over the weekend. Up in the top ten is Lord of the Rings: The Return of the King, re-released to scrape its market again.

The Cliff Walkers has made $383,000 in Australia in three weeks off 25 screens in the almost total absence of the Chinese student audience. Break Through the Darkness has not opened here.

To complicate the US studio story even more, AT&T seems to be feeling like the python which swallowed a goat. When it bought Warner Media, the screen company had to accept the rude fact that it was run by a telco with very different values. Now AT&T is doing a financial cha-cha with Discovery, the cable network which has turned itself into a global web by pioneering the adaptation to local audiences which Netflix is emulating.

The result would be that AT&T would still own most of the conglomerate, but Warner Media and Discovery would form a separate unit run at arm’s length. The benefit is scale, plus Discovery’s huge inventory and skill in reality TV which would make HBO a very different beast. The disadvantage, according to Variety, is that it would be run by the current Discovery boss, David Zaslav, who is known to lean heavily on budgets.

As far as Australia is concerned, this pumps up HBO and HBO Max as streaming companies to go head to head with Netflix and Disney+, providing an ever more complete temptation to stay home rather than go to the movies. Palace Cinemas believes that is not an existential threat.

Read more: How does Palace Cinemas see itself?

But the message for the domestic broadcasters is a bit grimmer. Putting Discovery directly into the mix means that the reality TV shows that help to differentiate the broadcasters from the streaming companies is eroded even more. However, Discovery is parked deep in Foxtel, so those rights will have to run out before we really notice a difference.