‘Shadow’, a film made collaboratively by people with disabilities, will have its world premiere at South by Southwest, along with ‘Seriously Red’, ‘Sissy’ and VR project ‘Lustration’.
Rochelle Siemienowicz 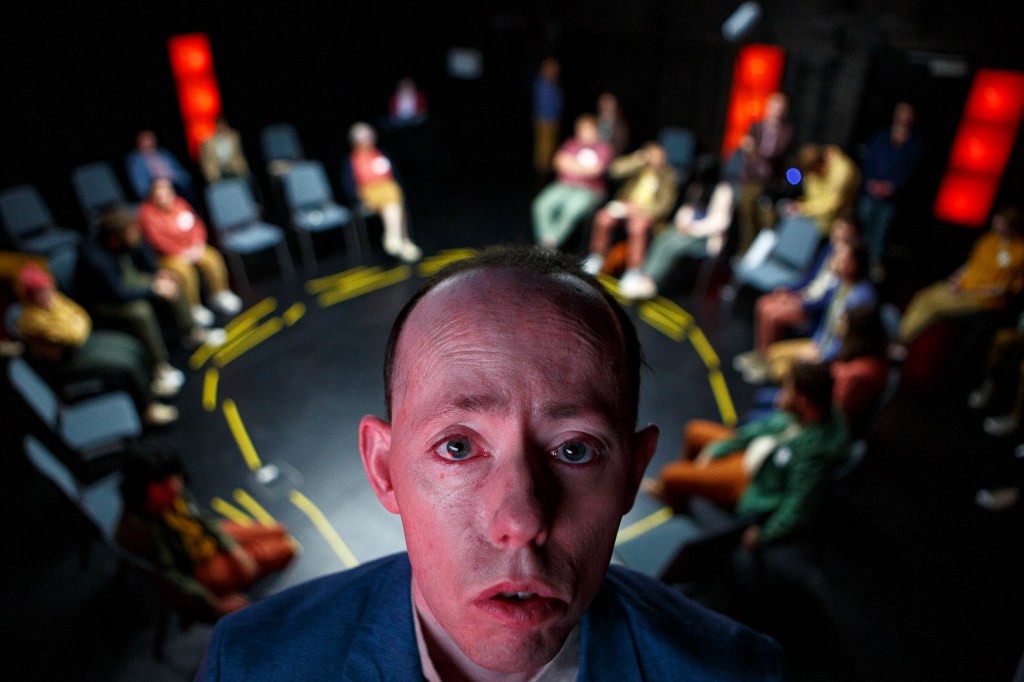 Back to Back Theatre’s film debut ‘Shadow’. Credit Tao Weis.

Back to Back Theatre’s debut feature film Shadow will enjoy its world premiere at the South by Southwest (SXSW) Festival in Austin next month, where it will screen along with six other Australian projects.

The Geelong-based company has been celebrated internationally for its innovative and collaborative approach, with an ensemble of actors with disabilities at its core.

Shadow is directed by Bruce Gladwin, produced by Alice Fleming and co conceived and co-authored by Back to Back Theatre’s core performing artists Michael Chan, Mark Deans, Sarah Mainwaring, Scott Price, Simon Laherty and Sonia Teuben. It is described as a darkly humorous film based on the company’s award-winning play The Shadow Whose Prey The Hunter Becomes (2019). That work, which was developed, in part, at the 2019 Sundance Theatre Lab at MASS MoCA, was described by The New York Times as ‘an extraordinary play’.

Members of Back to Back’s professional ensemble, Scott Price, Simon Laherty and Sarah Mainwaring star in lead roles, playing a trio of disability activists who hold a public meeting, desperate to save the world. As the meeting unravels, they discover the greatest threat to their future is already in the room.

Director and co-creator Bruce Gladwin said: ‘As artists we are seeking alternative models of story creation and screen production. Created over two and a half years through conversation and improvisation, the performers are also the co-authors, 95% of the people on screen are people with disabilities, and the majority of the crew roles are fulfilled by interns who identify as people with disabilities supported by professional mentors. The narrative thematic and the film’s philosophical approach to the process of creation are intrinsically linked. This is community filmmaking.’

Asked by Screenhub what it meant to have the film premiere at SXSW, Gladwin said:

‘SXSW is a heady mix of music, culture and film, more than anything, it’s going to be such a fun experience for myself and Back to Back actor Scott Price to attend. Scott is a new technology junkie as well as a great advocate for artists with disabilities, it’s going to be a joy to watch him exercise his muscle in the stimulating and receptive festival environment of Austin, Texas.

‘Making the film, we were novices. I didn’t even know we were making a “feature”, I thought it was just a longish “short film” that needed a more robust script edit. The creative team was full of ambition, operating with limited resources, just trying to hold it together minute by minute. We never anticipated a world premiere at SXSW. Personally, I’m going to keep “being a sponge” and learn as much as I can from the international experience.’

Read: The future of storytelling is collaborative

Actor and co-creator Scott Price told ScreenHub he was proud of bring his passion and ‘autism pride’ to the script and the screen, and that the film was ‘all about human connections, disabled or not

‘Shadow is a story that needs to be told. It’s about Artificial Intelligence and disability activism. The fact that it is premiering at a festival such as SXSW shows that it is a beautiful piece of work, and the importance of telling stories from the perspective of people with disabilities.’

Shadow will screen in the SXSW Festival’s Visions section on March 12 at 6pm and will be followed by a Q&A with the ensemble.

According to SXSW: ‘Visions filmmakers are audacious, risk-taking artists in the new cinema landscape who defy traditional categorisation in documentary and narrative filmmaking.’

The seven Australian projects selected for South by Southwest Festival 2022

This year’s Australian world premieres include feature films Seriously Red (written by and starring Krew Boylan as a Dolly Parton impersonator, and directed by Gracie Otto); and Sissy a horror-comedy by writer/directors Hannah Barlow and Kane Senes, starring The Bold Type star Aisha Dee as a social media influencer stuck in a cabin in the woods.

Writer-director Lachlan McLeod’s feature doc Clean will make its world premiere in the Documentary Feature Competition section, with its ‘fly-on-the-wall insight into the world of trauma cleaning through the journey of larger-than-life business owner Sandra Pankhurst and the workers at Melbourne’s Specialised Trauma Cleaning Services.’ It’s produced by GoodThing productions and will be distributed by Madman.

Ben Joseph Andrews and Emma Roberts’ Daintree VR project, Gondwana, which recently ran at Sundance, is also set to be showcased at SXSW

Full information of Australian projects at SXSW 2022 below, as per Screen Australia announcement.

SHADOW
World Premiere
Back to Back Pictures
Director: Bruce Gladwin
Writers: Michael Chan, Mark Deans, Bruce Gladwin, Simon Laherty, Sarah Mainwaring, Scott Price, Sonia Teuben
Producer: Alice Fleming
Associate Producer: Meret Hassanen
Executive Producers: Bruce Gladwin, Tim Stitz
Production credit: Developed and produced with support from Australian Government Department of Social Services, the City of Greater Geelong in partnership with UNESCO Creative City of Design, with additional support from Give Where You Live, the Une Parkinson Foundation, and Screen Australia through the COVID-19 Budget Support Fund Program.
Synopsis: A group of activists hold a public meeting, desperate to save the world. As the meeting unravels, they discover the greatest threat to their future is already in the room.

The 29th SXSW Film Festival takes place in Austin, Texas and online from 11-20 March this year.