Australian films at Sundance: ‘You Won’t Be Alone’, ‘Gondwana’ & ‘Shark’ 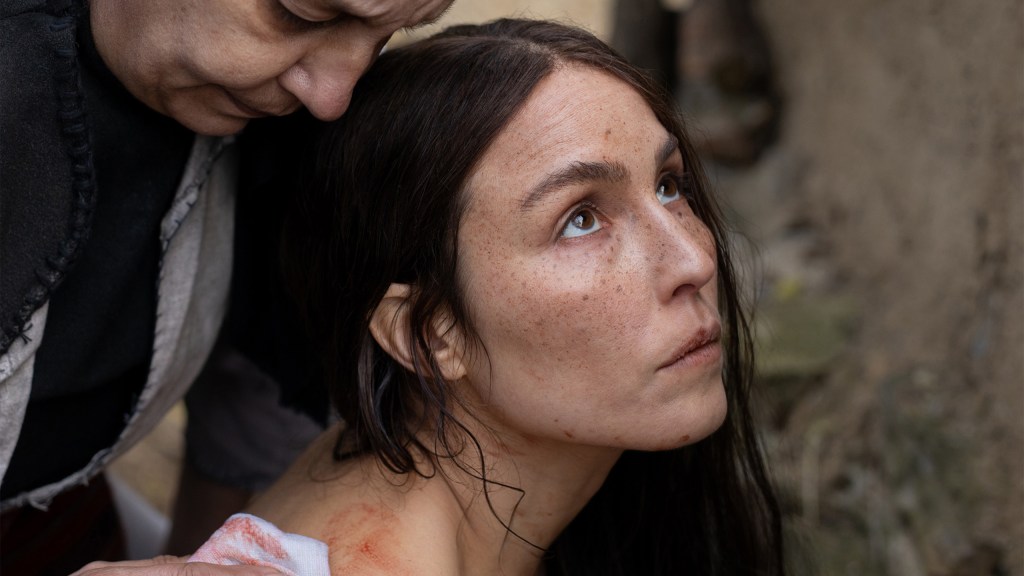 Writer-director Goran Stolevski’s supernatural horror film starring Noomi Rapace, You Won’t Be Alone, will make its world premiere at the Sundance Film Festival as part of the World Cinema Dramatic Competition in January 2022. Some predicted this would premiere in the Midnight section where horror and darkness usually find their home, but it’s selection for the Competition speaks of its elevated genre class.

The film is produced by Causeway Films’ Kristina Ceyton and Samantha Jennings and Causeway’s record with supernatural and horror arthouse is strong, including The Babadook, The Nightingale, Cargo and Buoyancy.

You Won’t be Alone is the debut feature for Macedonian-Australian director Stolevski, who has made more than 20 short films, including Would You Look At Her, winner of Best International Short Film at the Sundance Film Festival in 2018. You can see him talking about his aesthetic in relation to that short film here; his ‘warmhearted feminist assault on the patriarchy’ and ‘acute case of diva-worship’:

You Won’t be Alone, according to the festival synopsis: ‘In an isolated mountain village in 19th century Macedonia, a young feral witch accidentally kills a peasant. She assumes the peasant’s shape to see what life is like in her skin, igniting a deep-seated curiosity to experience life inside the bodies of others.’

The festival blurb continues: ‘You Won’t Be Alone is wonderfully unlike any witch film you’ve seen. Its striking artistry and aestheticism blends supernatural horror (there’s no shortage of blood and entrails) with poetic fable, yielding a sensory meditation on life that is unexpectedly emotional and profoundly humanistic. Even the malevolent ancient spirit, born of suffering and loneliness, is a contoured character. And the young witch (played by multiple actors, including Noomi Rapace, Alice Englert, Carloto Cotta, and Sara Klimoska) suggests a transcendent spirit who, across successive lives — woman, man, mother, child — experiences what it means to be human.’

Re: An interview with Rodd Rathjen, writer-director of Buoyancy

The Playlist among others, has called You Won’t be Alone one of the 22 most anticipated films of Sundance. It will release in the US on 28 January.

Writer/director Goran Stolevski said in the Screen Australia release: ‘Making this film was a gorgeous, gloriously insane and deeply moving experience. Our entire beautiful cast and crew could not be prouder or more thrilled to be premiering at Sundance.’

Producers Kristina Ceyton and Samantha Jennings said, ‘It’s been an incredible journey making this film during a pandemic, which turned out to be one of the most creatively rewarding experiences, working with Goran and the key creative team including our beautiful cast and crew from Serbia. Premiering at Sundance in the World Dramatic Competition is a huge honour and we can’t wait to share this moving, poetic genre piece with international audiences. We’re so grateful for the support we received from Screen Australia, Film Victoria, our post partner Kojo Studios and trusted sales agent Bankside Films in getting us there.’

The other Australian selection for Sundance 2022 is virtual reality project Gondwana, a durational VR experience set in the Daintree Forest that runs over 24 hours. Gondwana screens as part of the New Frontier program, focused on experimental work in VR, AR, MR and AI.

Directed by Ben Joseph Andrews and produced by Emma Roberts, who spent five months living off-grid in the Daintree during filming, Gondwana chronicles the possible futures of the rainforest. Powered by climate data, each showing is unrepeatable and speculative. Key collaborators are listed as Lachlan Sleight, Michelle Brown, and The Convoy.

According to the Sundance synopsis: ‘Participants are invited to roam the living, breathing forest and shore for an extended period to witness climate change in action over the course of each generative, 24-hour exhibition. The longer you are immersed, the more you will find, from hidden caves to mangrove forests, and butterfly swarms to crocodile encounters. You may also come across other participants in the environment, represented as luminous fireflies.

‘Every 14 minutes, the rainforest jumps forward in time by one year. With every time-jump, the rainforest degrades, bringing to life climate data projections. There is a salve, however; the more people take part, the more dynamic and resilient the forest becomes.’

Director Ben Joseph Andrews said, ‘We’re thrilled that our 24-hour VR experience Gondwana will unfurl at Sundance Film Festival’s New Frontier. This work has been a feat of incredible endurance, passion, collective creativity and technical wizardry. I’m beyond proud of our small team for producing a work of such richness and complexity, and wish to extend the most heartfelt thanks to them. We hope the Daintree rainforest may live within others as it does ourselves.’

Also interesting and from our region, is the VR project Atua (New Zealand) from lead artists Tanu Gago and Jermaine Dean and key collaborators Kat Lintott, Carthew Neal and Nacoya Anderson. ‘Reimagining the realm of Pacific gods in this sculptural AR experience. Claiming space for gender diverse communities impacted by colonial contact, to see themselves reflected as vital to their cultural heritage and an intrinsic part of the cosmos.’

Nash Edgerton’s 14-minute short film Shark will also have its USA premiere at Sundance in the Shorts Competition after making its world premiere at TIFF earlier in the year and screening at Sydney Film Festival. Starring Rose Byrne and Nash Edgerton, Shark follows the continuing adventures of Jack, who loves to prank, but in his latest relationship he may have finally met his match.

Writer/director Nash Edgerton said in the Screen Australia media release, ‘Sundance has truly been a home to so many of my short films. Both Spider and Bear had such a great receptions there and so to continue that with Shark will be a highlight of the festival journey of our film. We can’t wait to see how audiences react to Jack’s continuing misadventures.’

Formed in 1996, Blue Tongue Films, the collective comprising Nash and Joel Edgerton, David Michod, Kieran Darcy Smith, Luke Doulan, Mirrah Foulkes, Sean Kruck and Spencer Susser, have had many successful short films, as well as films like Animal Kingdom and two seasons of Mr Inbetween, with FX, which is also involved in this series of short films – Spider, Bear and now Shark.

Also in Sundance is the UK comedy Good Luck to You, Leo Grande starring Emma Thompson as an older woman who hires a young sex worker (Daryl McCormack) for a night of bliss.

The film is directed by Australian filmmaker Sophie Hyde, who won the Sundance directing award, World Cinema Dramatic for 52 Tuesdays in 2014.

A founding member of the Closer Productions gang, Hyde’s other films as director and producer include the documentary Life in Movement (2011), feature film Animals (2019) and TV series The Hunting. Fellow Closer Productions member (and Hyde’s partner and regular collaborator) Bryan Mason, also edited and shot Good Luck to You, Leo Grande.

Here’s the Sundance blurb: ‘Sophie Hyde (52 Tuesdays, Animals) returns to the Sundance Film Festival with this charming, intimate comedy about genuine human connections, sex positivity, and female pleasure. McCormack shines as the witty and empathetic Leo Grande, whose chemistry with Thompson’s wonderfully complex Nancy is captured by Hyde’s tender direction and Bryan Mason’s attentive camerawork. Written by comedian Katy Brand, Good Luck to You, Leo Grande strikes the perfect balance between unapologetic humor and an earnest study of the art of (self-)acceptance.’

Sundance 2022 runs January 20-30 and will be a hybrid digital and in-person festival. Here’s a handy list of the 82 movies that will screen in the pared down festival program.