Real estate is said to be all about location, but maybe it is all about the art? Melbourne artist Rone gives life to an art deco past.
Gina Fairley
[This is archived content and may not display in the originally intended format.] 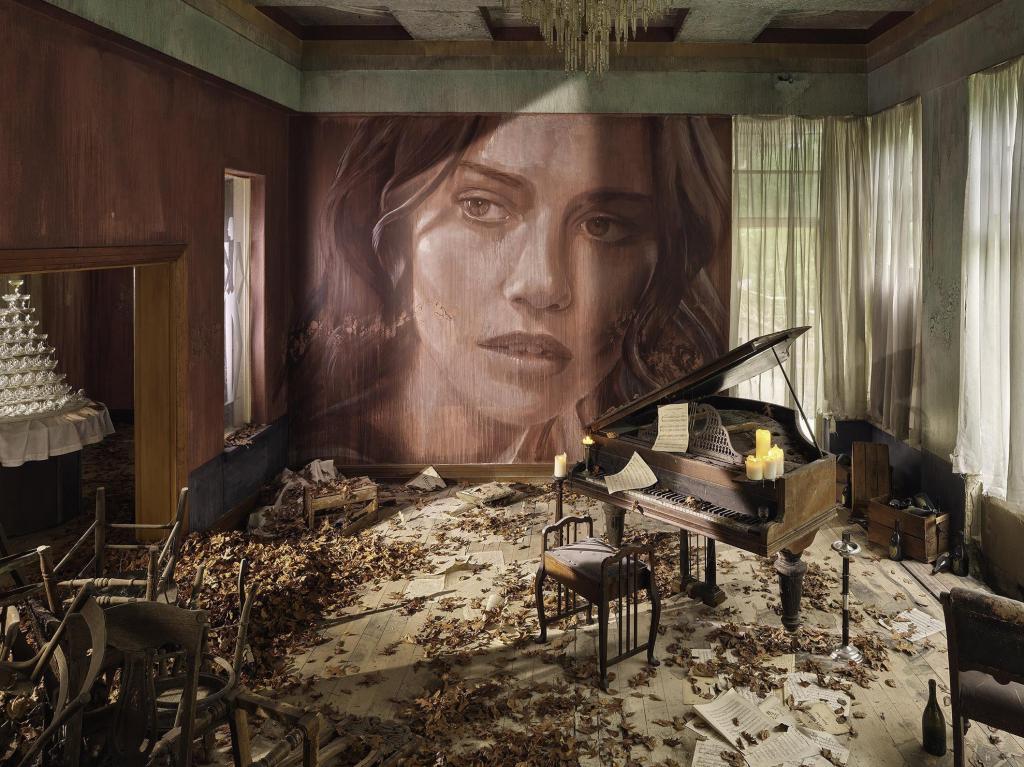 Real estate in Melbourne’s Dandenong Ranges is highly sought after, so a stunning art deco mansion abandoned for 20-years is a boon for anyone to get their hands on.

Former Collingwood street artist, Rone has been given that opportunity. The mansion, Burnham Beeches, was built in 1933 as the family home of wealthy industrialist and founder of the Aspro brand, Alfred Nicholas. After its heyday in the 1930s it served as a research facility, children’s hospital and luxury hotel, before being closed up in late 1990s. It was purchased by current owners, the Vue Group, in 2010.

‘When I first came up to check out the building I wasn’t sure what to expect,’ Rone said in a statement. ‘Once I got inside and realised that I had free rein on an entire mansion my mind was blown with ideas of what could be possible. It was quite overwhelming.’

Empire is his most ambitious project to date, over 12 months in the making. Part exhibition, part installation, part VR and AR experience, Empire combines art, vision, sound, light, botanical design and scent to take audiences on a hauntingly immersive multi-sensory journey into a re-imagined past of a faded icon.

Rone explained: ‘I love exploring the concept of how – and why – something so magnificent can be left to decline into ruin.’

Rone has worked with interior stylist Carly Spooner (The Establishment Studios, The Omega Project) across 12 of the estate’s otherwise empty spaces. Each room provide a different mood for audiences, some triggered by the seasons.

The rooms have been furnished with over 500 individual antique pieces, which Spooner and Rone painstakingly sourced over a series of months.

Included is a grand piano that, for several weeks, was left to the elements in the mansion’s garden to achieve its aged patina before being transplanted back into the house – moss, leaves and all.

A series of the Rone’s evocative monochrome ‘Jane Doe’ portraits fill the spaces.

In a spirit of collaboration, and complementing Spooner’s film set-like styling, is a series of botanical installations by Loose Leaf studio, and bespoke scent designed by Kat Snowden, lighting design by John McKissock, and sound design by composer Nick Batterham.

He describes Empire as walking into a ‘forgotten time capsule’.

This is not the first time Rone has taken on an abandoned site. In 2017 he tackled a condemned family home in suburban Alphington for The Omega Project.

With beginnings in street art, stencil and screen printing, Rone was a seminal figure in the early Melbourne street art scene.

Rone’s work can be found in the collection of National Gallery of Australia and National Gallery of Victoria, and his public murals can be seen on buildings in London, Paris, New York, San Francisco, Havana, Mexico City, Detroit, Hong Kong, and beyond.

Empire has been supported by Visit Victoria and can be viewed from 6 March through 22 April 2019.