In six years Melbourne WebFest has grown from backyard beanbags to serious player, reflecting the success of the web series format
Rochelle Siemienowicz
[This is archived content and may not display in the originally intended format.] 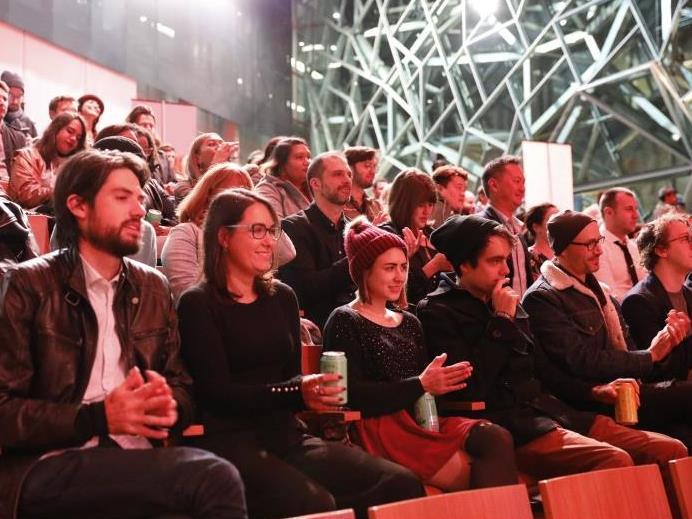 When Melbourne WebFest started in 2013, it was a one-day event in the Western suburbs with about 50 creators of web series sitting on beanbags and ‘high-fiving each other,’ according to festival director and founder Steinar Ellingsen, speaking to ScreenHub the day after the festival’s sixth incarnation (and his last as director). Ellingsen is exhausted and elated that the event has now grown into a four-day international festival of screenings, forums, a high-profile pitching event with ABC Iview, and a whopping 25 awards handed out to both local and international web series. There were about 1600 people in attendance, with a growing component of these being a curious public, as well as sponsors and industry players like City of Melbourne, La Tribe University, Film Victoria and Screen Australia, who are increasingly taking web series seriously.

The winners of the Melbourne WebFest awards provide a good idea of what’s possible within this rapidly exploding space, one that exists somewhere between cat videos and Netflix’s House of Cards. This is a place where comedy is still king (everyone talks about the breakout success of The Katering Show), but drama and documentary can thrive too, evading the censor’s pursed lips or the conservatism and tight time slots of traditional broadcasters. Which is not to say broadcasters and sponsors aren’t interested. They are suddenly quite keen to grab those youthful YouTube-grazing eyeballs. Exactly how to do this is, in Ellingsen’s words, ‘a nut that still hasn’t been cracked completely, but it’s exciting to see people are playing around with formats that are tailored to multiple formats, and experimenting with how to maximise their distribution opportunities.

To be completely fair to our national broadcaster, the ABC’s iview platform is celebrating its ten year anniversary in 2018, and according to Ellingsen, has always been supportive and a world leader in digital content. ‘Iview is still the driving force in the space,’ he says, ‘and in 2016 alone they commissioned more than 100 hours worth of original content that was digital first on iview.’ ABC iview has been involved with Melbourne WebFest since its inception, providing speakers on panels and with acquisition deals, but since 2015 they have been on board with a live pitching competition, the Pitch iview Award, so they could be part of the development process. This year’s winner, Anna Lindner, presented her winning two-minute pitch for web series ‘The Dash’ to an audience of 200 people including ABC iview channel manager Natalie Edgar. Lindner won $5000 intended to cover a trip to Marseille WebFest to attend their annual screenwriting residency, and no doubt much interest from the ABC.

Far from the homemade antics of cute kittens and dodgy backyard comedy, the biggest local winners of Melbourne WebFest’s awards were a couple of good-looking agency-financed productions, illustrating Ellingsen’s assertion that government support has been vital to the growth of the sector here in Australia. As he told Preferred Media earlier this year, the establishment of Screen Australia’s Multi-Platform Fund, (now the Online Production Fund) in 2012 was a watershed. ‘Within three years, funded productions grew more than 30 times. The highest budget we had in the first [ Melbourne WebFest] festival was around $75,000. Three or four series had $50,000-plus in funding… Compare that to last year, when four submissions had budgets over a million bucks.’

Speaking to ScreenHub, Homecoming Queens’ producer Katia Nizic, said, ‘I don’t think the Australian screen industry is aware of the power of shortform, but I think a lot of young creators are.’ A graduate from AFTRS in 2012, Nizic has worked as a producer’s assistant to Sue Maslin (The Dressmaker) and produced six short films, including Violent Florence, which premiered at SXSW in 2014. She said that ‘Producing Homecoming Queens was always intended to be a calling card for the types of stories we want to tell, to show that we could make something authentic and real, for a relatively youthful audience.’ Crediting the writers and creators Chloë Reeson and Michelle Law, Nizic said the series ‘shows how much story and character development you can do in a shortform series.’

Nizic hopes to make another web series in the future, having acquired the young adult novel This is Shyness with those intentions. Like every good producer ,she uses this interview to make a call out for support. ‘We developed This is Shyness and had actually been invited to re-pitch it to the ABC last year during pre[production] on Homecoming Queens, but I’m yet to hear back. Call me, ABC!’

Another multi-award winner at the WebFest awards was Steve Baker’s quirky five-part short animated series This is Desmondo Ray!. The series won awards for Best Animation, Best Visual/Special Effects and the Grand Jury Award. A spinoff from a 2013 short film which became a Vimeo hit, the series was produced by Leanne Tonkes of Sense & Centsability, and financed with assistance from Screen Queensland and Screen Australia’s online production program. With its story of a lonely-hearted misfit, Desmondo Ray’s mix of live action and animation has already collected a slew of more than 20 awards at web festivals around the world, an ADG Award for Best Direction of an Animation Project, and astonishingly, was the #1 ranked web series in the world for 2018.

THIS IS DESMONDO RAY! Prologue from Steve Baker on Vimeo.

Baker, the Brisbane-based creator and animator of This is Desmondo Ray! has been working in shortform far longer than most filmmakers, having written and directed online/micro TV animated series Did You Know for ABC2 back in 2004. His credits include the 2007 Tropfest winner An Imaginary Life (the first animated film to ever win the contest) and the AFI Award-winning animation Dog With Electric Collar (2008), but he says he loves the web series format because ‘There are no rules. You can create whatever you want, however you want, and be bold!’ He hasn’t ruled out making another series of Desmondo Ray.

Baker still hopes, however, to make a regular feature-length live action film one day soon. Asked whether making a web series has been a successful career strategy – or just a very intensive labour of love, he says: ‘I’m honestly not sure yet what it has, or will do for my career. The landscape is changing so quickly. If you had asked me this question a few years ago I probably would have said it was just for the love of it, which it still very much is with Desmondo, but web series are constantly evolving and starting to make their mark on the entertainment industry. There are people really starting to pay attention to what’s out there and more and more distribution avenues are opening up.’

As for what the future holds for the retiring festival director, the Norwegian-born former journalist and creator of the award-winning web series The Inland Sea: An Australian Odyssey, Steinar Ellingsen is looking forward to throwing himself full time into his day job. Formerly at La Trobe, he’s now an academic at the University of Wollongong, where he is a senior lecturer in Journalism, Communication and Media. But there’s no getting away from web series. Right now he’s working on a grant submission to the Australian Research Council with four other academics. ‘We’re looking at the values that web series are bringing to the broader screen industry,’ he says,’ and the way that Screen Australia are putting their development and production money in particular in early to mid career talent is more and more focused on digital. We also want to do  a comparative study between funding models and strategies in Australia, Canada and France. Because there are some overlaps and we want to see where Australia sits in all of that.’

Fingers crossed it gets funded because we look forward to reporting on that one.

The Complete list of Winners of the Melbourne WebFest Awards is below. You can also watch a video stream of the awards to see what such winners might look like.