Is the Australian Centre of the Moving Image a place? A Zone? A Cultural Accumulation Machine to defy COVID-19? First hints are released in a digital launch of the online component.
David Tiley 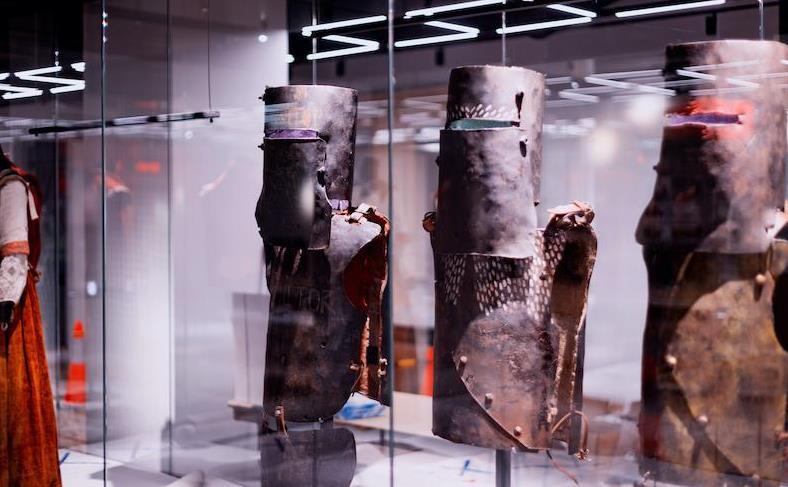 The armour from The True History of the Kelly Gang is now both a real and virtual exhibition. Image by Field Carr via  ACMI.

From day one, the imagineers behind the Australian Centre for the Moving Image (ACMI) recognised the meta-ness of the proposition. A digital museum of the media is itself a piece of digital media, so why do we have to go to a physical place to view it?

Twenty years later, the permanent exhibitions were dated, the inherent coolness of the design was simply glum, and the design was not really fit for purpose. It was time for a rebuild, and the Victorian State Government coughed up around $40m to entice visitors and proclaim the specific cultural swagger of Melbourne.

How could ACMI reconfigure itself for the web-laced world? The discussion around ACMI made sense in terms of museums, in which the building was no longer a site but an interaction.

‘For the last five years’, said CEO Katrina Sedgwick, ‘we’ve been reimagining ACMI for this big renewal kind of transformation. A core part of that proposal is: how can we use digital technology in a way that genuinely extends and enhances a visit to the museum?’

Seb Chan, the Chief Experience Officer, was brought into the triumvirate at the heart of senior management. ACMI was rethought as a clump of apps, run by an entire purpose built operating system.

As Sedgwick explained, ‘We’ve had a team of developers working inside the museum for the last 18 months, creating a new exhibition operating system, which is going to drive the technology within the museum, across our labels, across our interactive, taking media out of our collections, for exhibitions, into the website.

‘Screen culture is 120 years old and pervasive, and rapidly evolving in terms of how it is being delivered, how we consume it, and how we distribute it ourselves through our own devices.’

The XOS, or Exhibition Operating System, which is driving an entire institution, pulling out the stored data and using it as the building blocks for everything else. The pieces are the artefacts of screen culture. Sedgwick says, ‘Screen culture is 120 years old and pervasive, and rapidly evolving in terms of how it is being delivered, how we consume it, and how we distribute it ourselves through our own devices.’

How we understand that culture as it weaves itself into a singular planetary mat is changing as well. ACMI becomes a complex node on the net, which can deliver projects anywhere in the world, from works of digital art to games, to learning experiences or journeys or rituals or training programs. Anything that travels on the internet can be reframed, dismantled and reconfigured, explored and brought under control. All within the constraints of ownership and intelligibility.

The net becomes a museum, the world sits inside its content management system, so we can experience our digital ecosystem. We are sensing ourselves because these tools are extensions of us, are new senses, are transforming us as we build them. Right now we know that Covid is a vast  common experience touching the whole world, but we really have no idea how we are being remade.

Ahead of the formal relaunch of the physical entity, ACMI has just released a group of programs which illustrate the potential. According to the announcement, Sedgwick said, ‘We are launching a new brand identity and entirely new online presence, inviting people to visit our museum no matter where they are in the world. In the same way we curate and design exhibitions and programs for the physical museum, we have been developing them specifically for online across the breadth of screen culture – film, TV, videogames and art.’

The online door is now open. The Story of the Moving Image reconfigures a venerable gallery of images and artefacts from a persistence-of-vision devices to modern iconic Australian film costumes.

As the website announces, ‘Through six stories exploring the major moments of moving image history and local firsts, discover how screen culture has shaped who we are, how we see ourselves and how the world sees us. The Australian section of the film strand builds on the first Ned Kelly film, ingested by the EOS from the National Film and Sound Archive.

The site is made physical by three pieces of armour used in Justin Kurzel’s film, The True History of the Kelly Gang. The curator notes are built around an interview with Alice Babidge who describes the process by which she designed these contemporary interpretations of old Ned’s hammered from ploughshares.

Further links take us to the film, on Stan (or at least the trailer) and articles on Australian costume designers and the work of a costume conservator. Go sideways a bit more and we find Warwick Thornton’s film, Sweet Country.

Beyond a pair of cinemas

ACMI was confined from the beginning by the government’s fear of destabilising the market for the existing cinema complexes. So it only built two screens, which is a pretty limited way of looking at the screen works at the heart of the whole ACMI concept. Over the next fifteen years, the commercial venues moved away or died out, leaving venues which are too robust to be affected.

For a moment it looked as if ACMI could install several new screens and function like a ‘normal’ repertory venue. Instead, the museum will contain Gallery 5, described as ‘a dedicated stream of online-only artwork and performances in this new digital exhibition space. Gallery 5 launches with the premiere of Delusional World by Shanghai-based video, installation and performance artist Lu Yang as part of AsiaTopa 2020.’

ACMI has also gone into streaming with what it calls Cinema 3, featuring cult classics, revivals and new releases which will be presented in seasons. It will link directly to ACMI’s program of film festivals in Cinemas One and Two. The opening edition ranges from Romanian Neo-Noir to Japanese proto-punk, via Claire Denis’ Beau Travail.

Sedgwick said, ‘I’m so excited because the government funded us three years ago, and we had a very compelling case, with something like a nine to one return on investment. Who knew that when we reopen it could not be more important. We open our digital platforms now, and then our physical museum early next year will be such a gift at the right time.

‘As we re-animate our city, for our workers, our students, for the public, because our cultural life is our coming together. And we care about it so deeply, and to have a brand new thing that is ready to go at that time, is lucky.’