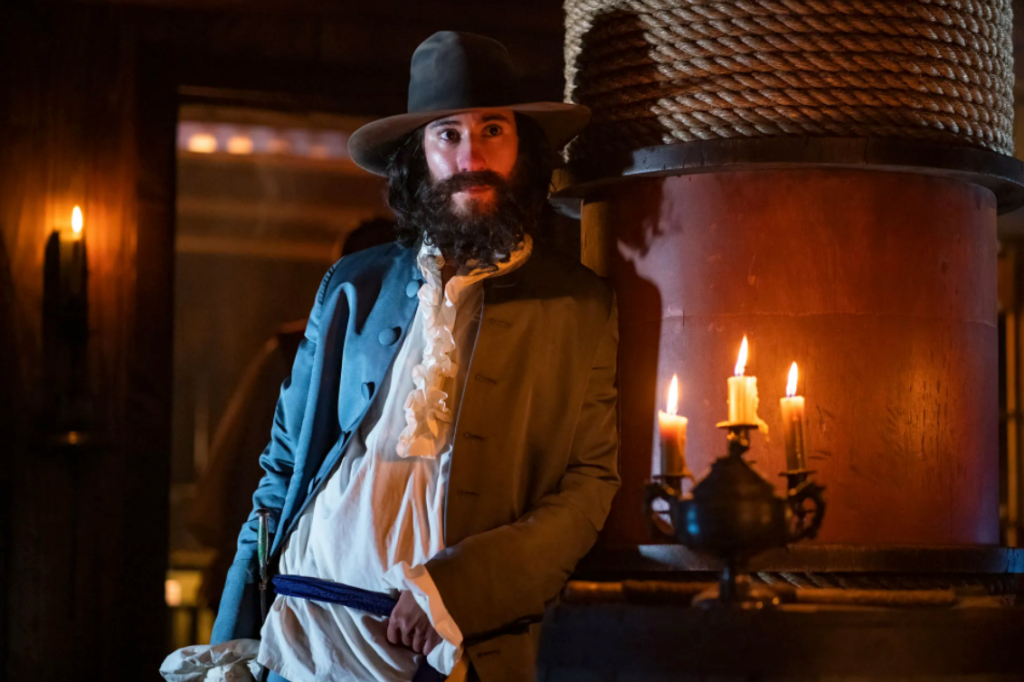 Vico is non-binary, and for them it was a real milestone to be playing a character that accurately represented their own relationship to gender.

I chatted with Ortiz to get the low-down on their affirming experience with the Our Flag Means Death crew, what it was like working with Taika Waititi, and of course: what we can expect from season 2.

AVAST YE: There be spoilers ahead, yarr…

Hi Vico! Let me get my gushing out of the way and say what a huge fan I am of the show and, in particular, your character. Jim really helped me have better discussions about being non-binary myself.

I know there were a handful of non-binary writers on the show, which is great to hear. What else did you feel the creative team got right with regards to non-binary representation and respect?

Well, that is worth highlighting, because we didn’t just have one writer in the room who was non-binary, we had several. I got really lucky, because what often happens is that a non-binary character is written by people who are not even close to the community, and they congratulate themselves for meeting that minimum. So this is a huge plus.

We also had a mandatory sexual harassment meeting on our first day on set, and during that they mentioned gender discrimination and the use of pronouns. That was the first time I’d heard that mentioned. I wished I was able to add to it, but while that was happening I was simultaneously getting my head measured for a wig. So afterwards I went to some cast and crew members and said ‘hey, let’s grab lunch, let’s meet each other properly’.

I used that opportunity to address everyone and just say ‘Hey, I’m going to come out to y’all right now. My name is Vico, I’m non-binary, I use they/ them pronouns, and you will mess up! If I correct you, say thank you, and repeat the sentence with the right pronouns. Or if you’re able to correct yourself, just do it, and move on. It’s going to be okay, breathe!’ It’s an ongoing learning process, right?

A lot of the time I will be the first openly non-binary person that someone’s met. I’m sure they’d have met other people who are non-binary or trans, but they just don’t even realise. I’m consciously trying to be as quirky and loud as possible. I’m like, ‘Hey, what’s up? What’s your name? What are your pronouns?’ And the common reaction from them is: ‘… What just happened?’ So I’ll clarify by listing pronouns: she/her, he/him, xe/xyr … Then they get it and can give an answer.

And through that, I was able to have really wonderful conversations about gender with people that were not aware at all, to people that have been questioning and had been afraid of mentioning pronoun usage, or to come out as non binary and use they/them pronouns. A lot of people thanked me for opening up that conversation, because they had never been asked before.

For a set that was predominantly cis-het, they did more than I had ever seen on other productions. But even with all these great measures, I think it would be good to have pronouns on the cast and crew call sheet. They could be printed right next to everyone’s names. On set I really was the only one asking for pronouns and giving pronouns. So there’s always space to be better.

Do you think that represents a bigger change for non-binary representation on screen?

Absolutely, I hope so! I didn’t even realise initially that they would use they/them pronouns for Jim, my character. In the first couple of episodes, while in disguise, they’re referred to as ‘he/him’. Then the non-dialogue descriptions in the script switched to they/them. It wasn’t until other characters actually referred to Jim in dialogue as they/them that I thought ‘Oh wow, they’re really going for it!’ I had just assumed that, because it was the 1700s, they [the writers] weren’t going to bother.

The fact that I didn’t even have to ask is amazing. I was so excited to play this role. And of course, the more you see these kinds of characters on screen, the better. It also helps to have a more diverse crew in roles that are higher up on the food chain, so to speak.

When, or if, there is a season 2, the first thing I’ll ask for is pronouns on the call sheet! I’ll be texting my WhatsApp group chat [with the cast] to get some solidarity going behind that.

Speaking of the cast, what was it like working with Taika Waititi and Rhys Darby? Did their New Zealand-style humour gel well with the mostly UK and US-based cast?

They’re both so freakin’ funny. I’m Puerto Rican, so what I’m most used to hearing is the American dialect – specifically Californian and New York voices – and when Taika and Rhys would start riffing with each other I was like ‘I need subtitles!’ I couldn’t recognise the words anymore. But it was so fun, because they’re both so physical and watching them improv together is a real journey.

I like to describe working with Taika as working with Mary Poppins’ bag, because on the outside it’s just an ordinary bag – a nice, attractive looking bag, right? – but then you open it up and all these things come out and it never stops. His creativity as a director and actor knows no bounds.

And then with Rhys, he is so good at physical comedy that we genuinely thought he was going to hurt himself. We were rehearsing the scene were Stede Bonnett robs the fishing boat, and he [Darby] just jumped on the ladder and went for it, and I immediately thought ‘Oh no, we’re going to lose our captain and it’s only the first day!’ And then there were so many more bits like that. It was really hard not to laugh during takes.

I’m really good at not laughing, but that’s also because I wore the hat and beard for so long. Samson Kayo, who plays Oluwande, was the worst – he almost always broke!

Read: Our Flag Means Death – who was the real ‘gentleman pirate’?

I imagine there would have been a lot of laughter on set. You’ve described yourself as not just a part of the show but a fan of the show – did that happen instantly or after it gained such a strong online fandom?

I was a fan instantly. You can ask [series creator] David Jenkins if you don’t believe me. Even before sending my audition tape in, I was reading the pilot and thinking ‘this is amazing, It’s so gay, it’s so queer’, and I knew I was gonna love it regardless of whether or not I was in it.

After being cast and reading through the episodes, I was waiting for the ‘gay chicken’ moment, because I really didn’t think they were actually going to go for a main queer relationship. And then as the relationship between Stede and Blackbeard developed I was reading it and squirming with excitement. I would look at David and just say ‘give it to me!’. I could read about Jim’s story later, I just wanted to know what happened between these two guys.

And now that there’s a real fandom, I’m so relieved I can truly let loose. For a long time it felt like I was the only fan of the show, and now everybody can share in the madness.

Now that Blackbeard has regressed to his ‘kraken’ state and separated Jim from Oluwande, what do you hope will happen in season two?

I wish I knew anything. But here’s what I want to happen: Jim will be like ‘Ok Blackbeard, I’ll play along with your weird fucked-up game, just enough so that you don’t suspect that I’m gonna stab you in the back … but that’s exactly what I’ll be doing.’

I’d also love to see Jim interact more with Izzy (Con O’Neill), Blackbeard’s right-hand man, because he’s so guarded and competitive. Jim shares those traits and it would make for a really interesting dynamic. I think we could reach an understanding and get each other to open up.

Also, as for the cliffhangers, I really hope Lucius (who we last saw getting pushed off the ship) is alive somewhere, and that Jim and Oluwande get to reunite. Or maybe not – maybe Jim will find love with someone else and we can all be happy together. I don’t know!

I have my fingers and toes crossed for season two. Apart from that, is there anything you’re working on at the moment?

I am actually dipping my toes in producing, which is very exciting. I can’t talk about it too much, but I have a few different things in the works.

Aside from that, my Pride month is looking very busy. I’m a drag king as well, so I have a few drag shows lined up, and then a panel for Trans Pride at the LGBTQ Center. It’s all happening!

Our Flag Means Death Season 1 is streaming now on BINGE.