Surfing in 2022 is not how it was in its laid-back heyday but these shows express beautifully the thrill a great wave can still provide.
Mel Campbell 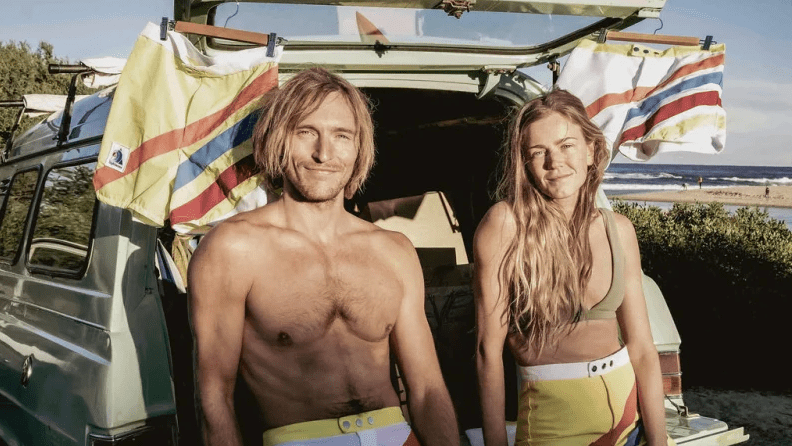 How did surfing, which prizes a laidback coastal lifestyle of philosophical oneness with the ocean, become so commercialised that 15-year-olds are already fretting about the trajectories of their professional careers?

That’s what I wondered as I watched Surviving Summer, a ten-part young-adult series made for Netflix by Joanna Werner (Dance Academy, The Newsreader) and Josh Mapleston (Beat Bugs, Maximum Choppage). To appeal to international audiences, the titular protagonist is sassy Brooklyn skateboarder Summer Torres (Sky Katz), who moves to the fictional Great Ocean Road surf town of Shorehaven.

Summer doesn’t really appreciate that her mum, a onetime champion surfer, was a big deal here. But surfing has been around long enough in Shorehaven for dynasties to develop – not just the Torreses and Gibsons but also the Tetanui family, whose recently deceased mum had run a surf school and coached the Shorehaven Surf Club.

The paradox of surfing in Surviving Summer is that it’s both a source of joy and friendship, and a dispiriting, competitive grind. It’s best understood as Dance Academy for surfing, adapting that long-running franchise’s popular and award-winning combination of intense physical striving, mental toughening and romantic entanglement.

There’s a lot of emphasis here on zero-sum rivalry with your friends, and constantly having to mask your disappointment. Ari’s still upset that his friends froze him out after his injury – particularly ambitious Brazil-born Marlon Sousa (João Gabriel Marinho). Ari and Marlon also vie for the affections of Bodhi Mercer (Savannah La Rain), whose model-gorgeous looks have earned her an Instagram following to match her surfing prowess.

Weirdly, but refreshingly, Summer never buys in to their grindset. Instead, her impulsive attempts to help her new friends ‘loosen up’ often literalise the show’s title. Summer has a terrible case of Half-Formed Teenage Brain: she’s incorrigibly self-centred and arrogant while being only ever semi-competent at anything she attempts. And she’s incapable of taking anything seriously – least of all surfing. She doesn’t get that her new friends might be her age, but they’re already laser-focused on their nascent careers.

In retrospect, the 1970s were a pivotal decade in surf culture. Having begun as an ancient Polynesian artform, by the 1960s, surfing had become both a hedonistic cliché – mined by the Beach Boys and Gidget movies – and a globally mobile bohemian counterculture chronicled in films such as Bruce Brown’s The Endless Summer.

But while surf culture was growing, it still hadn’t yet solidified into a self-sustaining commercial structure – and that’s the transition dramatised in Barons, the seven-part ABC miniseries created by Michael Lawrence (Bra Boys, Fighting Fear), John Molloy (The Gloaming, Molly) and writer Liz Doran (The Gloaming).

Snapper is made even more bitter that Trotter, his former employee at Barefoot Wetsuits has started his own board-short empire, Lightwave, in partnership with Snapper’s ex, clever Tracy (Jillian Nguyen)… who chose to marry Trotter.

The series enjoyably reproduces what now seems like a long-gone golden era – both with the meticulous work of production designer Tim Ferrier and costume designer Marion Boyce, and with transitions between grainy archival and made-to-look-archival footage. Its characters, too, are nostalgic, longing for a simpler time when they just wanted to make a few dollars on the side to subsidise a life of surfing by day and partying by night.

This sets up a fascinating ambivalence at the heart of the ‘entrepreneurship’ genre, which usually focuses on how a plucky outsider works hard and succeeds. We meet the main characters as their international friends blow into town – former surf champion and now professional beach bum Buddy Fraser (Lincoln Younes), real-estate heir dropout Bernie Hunter Jr (George Pullar), and glamorous, exotic Margaux Dupont (Vivienne Awosoga), who has a mysterious romantic history with Trotter.

The group trip to Bali they’re all reminiscing about, which happened before the series begins, seems to have been the true tipping point in their lives. Every brand they build, every surfing tournament they organise, every trip back to Bali, takes them further from pure surfing and into corruption. They’re propelled forwards but downwards, as a wave’s energy must travel.

Barons is notable for its attention to privilege, showing that while surfing has a long non-white history, its pursuit as a lifestyle and a career historically required white privilege and access to economic and social capital. Tracy and her prodigy grommet brother Dimma (Sebastian Tang) are Chinese-Australian, and they often do the hard work and bear the bad consequences of the white characters’ actions.

Reg Thompson (Hunter Page-Lochard) dodges the Vietnam draft as rebellion against ‘model minority’ status: he resents his adoptive parents’ fretful insistence that Reg must work ‘twice as hard’ to be accepted because of his Aboriginality. Reg faces racism on the beach and from the police; his surfing is demonstrably riskier.

But the horizon seems to be expanding, not contracting, for Dani Kirk (Sophia Forrest). Her surfing prowess sees her treated as ‘one of the boys’, but Dani has a sexual awakening courtesy of surf photographer Shirley Kwong (Catherine Van-Davies). Of all the cast, Forrest looks most like a 1970s surfer; watching her navigate an alternative, less misogynistic Puberty Blues narrative is one of Barons’ pleasures.

By 2022, surfing is thoroughly corporatised, and the teen surfers of Surviving Summer have internalised its demands. By including female surfers as major characters, yet accepting that they must look good as well as being elite athletes, the Netflix series does soft-pedal the sport’s notorious sexism. ‘That’s surfing,’ Poppy says resignedly at one point.

What both shows express beautifully, though, is the thrill that a great wave can still provide. By casting actors who can also surf, Surviving Summer pulls the Dance Academy trick of putting real physical prowess at the centre of the characters’ storylines; in the gorgeously shot surfing sequences, we can see it’s really them.

On the other hand, Barons relies more heavily on surf doubles, and tends to shoot its surfing sequences in golden hour, hiding the characters’ faces in shadows and sun-spangles. Its superb surf action sequences are courtesy of Taylor Steele, director of landmark 1992 surf film Momentum. I particularly noticed the difference between the athletic carving style we see in the Australian surf scenes, and the smoother cruising style in the California scenes.

An interesting subplot in Barons is the parallel development of surf media – represented here by Shirley, by globe-trotting surf filmmaker Sharpie (Nicholas Burton), and by the controversial anti-Vietnam surf magazine cover that makes Lightwave’s reputation … but only brings stigma to Reg.

While Surviving Summer is a straightforward YA melodrama that can be binged like fish-and-chips on the beach, Barons more ambitiously, and ambivalently, tries to capture the many moving parts of the historical moment that turned a subculture into an industry. It has a go at tackling many social and cultural pressures, and isn’t always successful. But the balance it strikes between energy and elegy is still satisfying.