Digital media now dictates a child's initial experience of literature, art and - most worryingly - often creative discovery.
Emma Clark Gratton
[This is archived content and may not display in the originally intended format.] 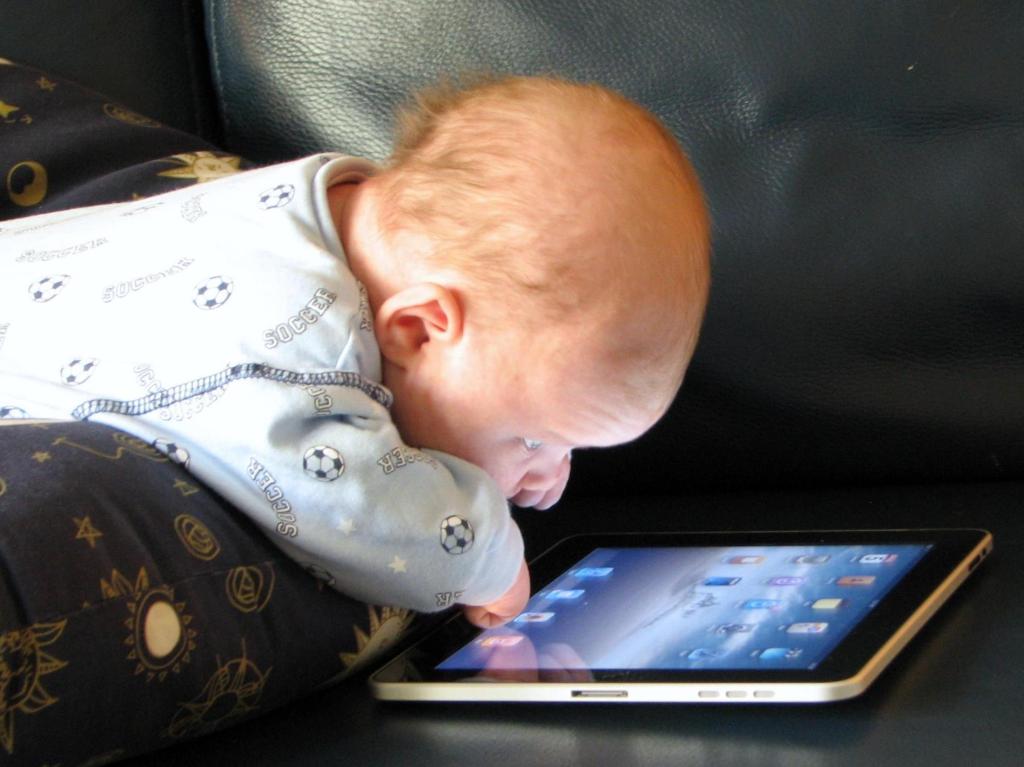 All new technologies have their detractors. When print was invented, the French statesman Malesherbes argued it isolated readers and reduced the spiritually uplifting sense of community that came when news was delivered from the pulpit. When television became popular, American educator Neil Postman wrote that it was responsible for the disappearance of childhood.

Perhaps Malesherbes and Postman were right but the world has moved on regardless. The arrival of the internet and personal computer, tablet and smartphones has sent pundits, social commentators and well-meaning parents into a similar frenzy. There are now 2.8 billion smartphone users worldwide. Kids learn to swipe an iPad before they can turn the page of a book and are kept amused in cafes, cars and supermarket trolley with an endless supply of moving colour. There are even coding classes for pre-schoolers.

The 2012 Australian Health Survey found that children between the ages of two and four spent almost one and a half hours per day (83 minutes) watching TV, DVDs or playing electronic games. It is likely that this time has increased in the past four years since smartphones have become more ubiquitous.​

You don’t have to be a tabloid screaming 4-year old ‘4-year old iPad addict’ or a BBC journalist asking “Is txt ruining the English language?” to wonder what the costs and benefits will be.

‘The creation of something new is not accomplished by the intellect but by the play instinct,’ wrote psychologist Carl Jung.

Play has long been recognised as the foundation of our capacity for creativity and a child’s experience of play is linked to the development of their imaginative and creative thinking.

But as toys have become more sophisticated, the play experience has moved from the child’s to the adult’s initiative. A crude doll constructed by the child depends much more heavily on the child’s capacity to imagine than one delivered already formed – and the difference is even greater when the doll is endowed with a scripted personality. The move from the rag doll to Barbie to a Dora the Explorer doll is essentially a move away from creative play.

It’s possible to see electronic play as an extension of this corporatisation of childhood. Tablets and smart phones deliver a wealth of predetermined graphics and story lines, dreamed up not by children but by marketers and content creators.

In the sense that electronic games give children autonomy and choice, they enable creative play but they do not give the child the capacity to imagine something from nothing. Nor do they require the manipulation of body and materials (excepting that swiping finger) that previously characterised writing, art or music-making.

While most media focuses on the limitations and dangers of electronic play, Salonius Pasternak and Gelfond note potential benefits including providing children with the opportunity to negotiate society’s rules and roles, allowing children to experiment with aggression in a safe setting without real world consequences, facilitating children’s development of self-regulation of arousal, and serving as an effective tool in clinical settings.

Digital technologies can be especially helpful for kids with learning difficulties such as dyslexia, handwriting issues​ or speech ​concerns. Sydney psychologist Kimberley O’Brien uses apps and program to help children with autism spectrum disorder. ‘It can be a helpful tool to teach the theory before the practice, so children can practice different emotional reactions and how they might deal with certain situations before the situation arises in real life,’ she told ArtsHub.

Former primary school teacher and now primary carer to two young chilren Ryan Sterling has found that electronic tools can promote creativity by overcoming technical barriers. ‘I have certainly seen huge benefits with children who have conditions such as dyslexia. I’ve had one particular student who benefitted a lot from using an iPad to record his voice and turn it into text. He was also able to read along with digital books on the screen while listening to a voice from the iPad read the text. It really helped improve his confidence and he found it really fun. He was able to “write” (the computer decoding his voice into text) way, way, better than he ever could with pen and paper.’

iPads in school also offers potential greater global connectedness and opportunities for creative participation. Ringwood North Primary School in outer Melbourne introduced iPads to Grade 4 and 5 students in 2010. The school participated in the Epic Citadel Challenge, a global project where students all over the world create short fantasy stories and shared them with their peers.  A teacher from the school noted, ‘As the project developed, it became more about the connections being made through the use of technology. Students and teachers from opposite sides of the globe collaborating, sharing ideas, providing feedback for one another’s work, and as teachers, having the opportunity to work with other enthusiastic educators.’

Sterling said iPads get plenty of use in his classrooms as they can help personalise a student’s learning. ‘If, for example, during a reading session you discover that a student is really interested in something such as forensic science, they can instantly find information about it. It enables students and teachers to be quite dynamic and respond to student/teacher/whole class interests quickly. Sometimes the best teaching can come from unplanned tangents. The technology really helps allow for that.’

Clearly the effect of electronic play depends a great deal on what – and how much – is played. Dr Nicholas Kardaras describes the addictive game Minecraft as having the same effect on the brain as a drug like cocaine or herioin. ​

Children and technology is a polarising debate in parenting circles. Some parents ditch the devices completely and have no screens at all for their young children, while others have a full orchard of Apple products and their four-year-old enrolled in coding classes. Most parents lay somewhere in the middle, but very few seem confident with what’s the best way to tackle the screen conundrum.

Sterling is among the many cautious parents. ‘Kids are inevitably going to be using a lot of technology in their lives. I think that under 4 or 5 perhaps they don’t need it thrust on them. I guess I also have a slight concern that literacy games can get kids decoding text well, but what is it actually doing for their comprehension skills? Is it building a love of books? Are they building a love of literature and reading or are they just playing a game that they can “win”?’.

O’Brien said the two main concerns she sees with kids and technology are accessing inappropriate material and not wanting to switch off or stop watching the device. ‘Between the ages of about two and five, we see meltdowns and withdrawals when the iPad is switched off,’ she said. ‘And with older kids, so age six to 12, there is concern over accessing inappropriate material. So supervision and setting limits is really important. Setting parental controls to restrict the material that the kids can access and setting firm time limits will help.’

‘We sometimes see teenagers becoming quite aggressive and even have physical altercations with their parents when screens are turned off. Setting limits at a young age will help manage behaviour and expectations once the kids get older.’

The physical impact of overuse of screens is also an issue. The Brien Holden Vision Institute at the University of NSW warns that the number of Australian teenagers with myopia had doubled over the past 15 years, citing too much screen time and not enough time spent outside as the culprit. A UK study found that 40% of children aged between 11 and 16 had back or neck pain, with 15% of parents saying their child’s back pain was as a result of screen usage.