Culture Wars: even Dr Who is being savaged

While we watch the culture warriors attack the ABC, the divisions in Britain are creating a toxic environment even at the audience level.
The Conversation 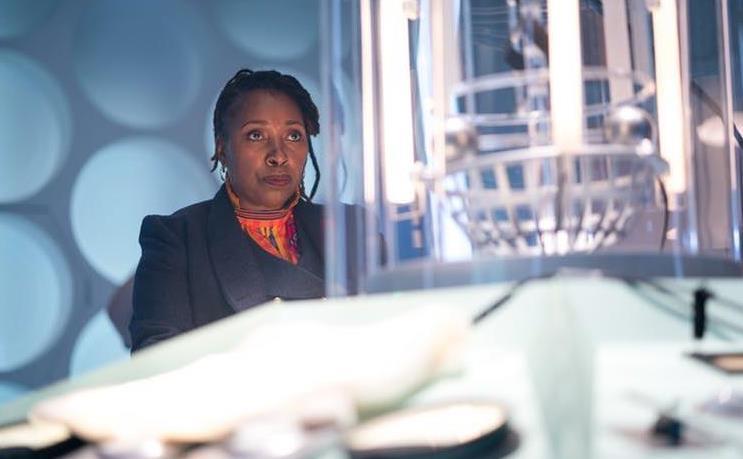 Jo Martin as a parallel Doctor Who in the latest series. BBC / Ben Blackall

BBC audiences were recently introduced to their first black Doctor Who. In the episode which aired in the UK on January 26, Jo Martin – previously best known for roles in Holby City and Blue Story – played an ostensibly ordinary human who was, towards the end of the episode, revealed as a previously unknown (possibly past, future or parallel) incarnation of television’s most famous Time Lord.

A few weeks earlier the latest version of the show’s recurring super-villain, The Master, had for the first time been portrayed by a person of colour, a role played with manic zeal by Sacha Dhawan in a performance dubbed by The Guardian as the “Hot Camp Master”.

Both events provoked strong responses on social media, from enthusiastic plaudits through to rants from fans ranging from the sincerely “woke” to the reactionary and even racist. The latter response might be considered out of character for the followers of a show whose liberal hero has for more than half a century renounced violence and struggled for peace, social justice and environmental sustainability.

This is a series whose very first episode had a female producer, Verity Lambert, and a British Asian director, Waris Hussein – phenomena virtually unheard of back in 1963. (The latter was also played by Dhawan in the BBC’s 2013 docudrama An Adventure in Space and Time.)

It’s a programme which, in 1972, argued passionately (albeit symbolically) in favour of membership of the European Economic Community (or in its own terms the Galactic Federation), and a year later railed against the impacts of industrial pollution.

In recent years, it has foregrounded LGBT+ protagonists, issued dire warnings against climate change and even made reference to the fabrication of evidence to support the invasion of Iraq.

Yet since 2017, when Jodie Whittaker was cast as the first female Doctor Who, arguments have raged between those strange misogynists depicted by the Huffington Post’s Graeme Demianyk as “man babies” and, in contrast, the likes of The Guardian’s Zoe Williams, who heralded Whittaker’s Doctor as representing “the revolutionary feminist we need right now”.

If, like mine, your social media bubble overwhelmingly favoured the Remain campaign and still can’t get its head around the fact that the majority of people didn’t, then your friends and followers may well have applauded Martin’s appearance. But you might then be surprised if you were to venture into some Doctor Who fan forums. You’d see quite a backlash against what some perceive as the politically correct direction their favourite show has taken. “This show and all it used to offer has been destroyed by politically correct writing and casting,” opined one fan. Another responded: “It’s not ‘woke’, unless your idea of woke is ‘it has a black woman in it’. It’s the blandest form of mainstream liberalism but some internet talking heads treat it as if it was 50 minutes of Jodie Whittaker reciting the Communist Manifesto.”

The outrage of the anti-PC brigade has simultaneously fuelled – and been fuelled by – coverage in the mainstream media. Echoing a populist press narrative that the series has become, in the words of the Daily Mail, “a tiresome ordeal of political correctness” since Whittaker assumed the role, The Sun reported this week that viewers baulked at the programme’s “unbearable political correctness” as “another female Doctor” was revealed.

This backlash has sparked an equal and opposite reaction – one which, like the fan who described the series’ current ideological stance as “the blandest form of mainstream liberalism” – is not simply aligned with that stance, but which is concerned that its stance is not radical or robust enough. Writing in the New Statesman, assistant editor Jonn Elledge has argued that the casting of the first female Doctor has been undermined by the fact that that she has been “given no material as meaty” as that written for the supporting male characters.

Despite having repeatedly argued for the importance of that casting decision in books and articles, both here and elsewhere, I’ve since expressed concern at the series’ simultaneous weakening of the character.

Jack Hudson has recently argued in The Guardian that, beneath its guise of progressive politics, the show has in fact grown profoundly conservative in ways which may at once alienate both its progressive and its reactionary fans.

Whither the liberal consensus?

In December Lenny Henry (in the run-up to his recent appearance in the series) was quoted as suggesting that BBC bosses would rather cast a dog than a black actor in the title role. In this context, Martin’s casting as the first black, female Doctor seems particularly significant.

Yet Martin’s Doctor is not (as yet) the series’ lead. Progressive voices in fandom have sometimes suggested that, when Whittaker eventually leaves the series, her successor will most likely (and most appropriately) be a woman of colour. There may now be those who fear that Martin’s tangential Doctor (whoever and whenever in the Time Lord’s timeline she may turn out to be) has ticked both those boxes – and that the production team may next time once more fall back on casting a white, male lead.

These arguments will doubtless continue to rage, along with much bigger ones. The polarisation of political perspectives among the British public since the Brexit referendum of course remains a matter of ongoing national concern. The current disagreements amongst Doctor Who fans – once a group which unambiguously embodied the liberal consensus – may appeal to the mainstream media precisely because they mirror those larger societal divisions, and may prove of greater significance as indicative of those broader ideological shifts and splits.

Alec Charles, Dean of the Faculty of Arts, University of Winchester