A new film by Damien Power to put you right off camping in the bush.
Liza Dezfouli
[This is archived content and may not display in the originally intended format.] 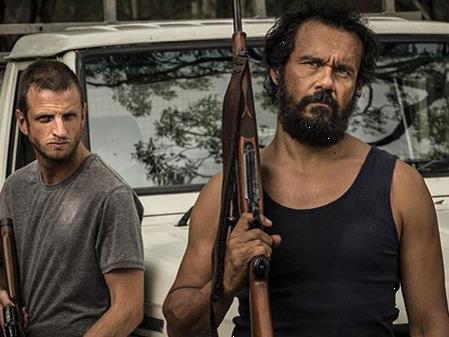 Killing Ground is set on New Year’s Eve. Loved-up couple Ian (Ian Meadows) and Sam (Harriet Dyer) decide to get engaged as they set off on a camping trip in the bush.

Opening shots of remote bushland create a sense of dread and menace juxtaposed against the warm rapport we witness between Ian and Sam in their car.

Sam has left the champagne back home so they stop on the way at a small town to pick up some bubbly. Ooops-a-daisy. When Sam and Ian arrive at their campsite they find a tent has already been set up but there is no-one else about. By nightfall they begin to wonder about the abandoned tent and Ian finds a small child’s beanie with ‘Ollie’ embroidered on it. Ollie turns out to be a toddler whose parents are missing. Locals ‘German’ and ‘Chook’ return to the scene to prevent Sam and Ian finding out more. It isn’t a pretty story.

Aaron Pedersen as pig hunter Scotty ‘German’ Shepard, and Aaron Glenane as Todd ‘Chook’ Fowler, the baddies, are coldly sinister, believable and disturbing villains. Their friendship is convincing. The two are casually violent rapists, for starters, and Chook’s sense of entitlement when it comes to sexual assault is what begins the awful chain of events when he comes across a young woman, reluctant camper (Tiarnie Coupland) who’s avoided a family bushwalk by locking herself in the family 4 wheel drive. Her father (Julian Garner) and step-mum (Maya Strange) have set off on a hike with their little boy Ollie. They don’t return. Flashbacks fill us in on the story as the film, interestingly structured, winds back around on itself so while watching you are wondering what has happened, along with wondering what will happen.

Writer director Damien Power says his film ‘is inspired by the classic character-driven survival thrillers of the 70s’ as well as belonging to a long Australian tradition of stories expressing the sense of unease we feel ‘in our own backyard.’

Killing Ground is skillfully handled and stays in your mind like a nightmare. It’s tense, frightening, with unexpected twists, it makes you squirm and feel ill with trepidation; you can’t imagine how the two young people are going to get out of their predicament.

One logistical element didn’t make sense to me, however. There is a scene where Baby Ollie appears silently in the background; if he were still able to totter he’d have been bawling, surely? But that’s a quibble in an otherwise impressive thriller. All round a strong first film.