National Theatre Live never misses a step.
Liza Dezfouli
[This is archived content and may not display in the originally intended format.] 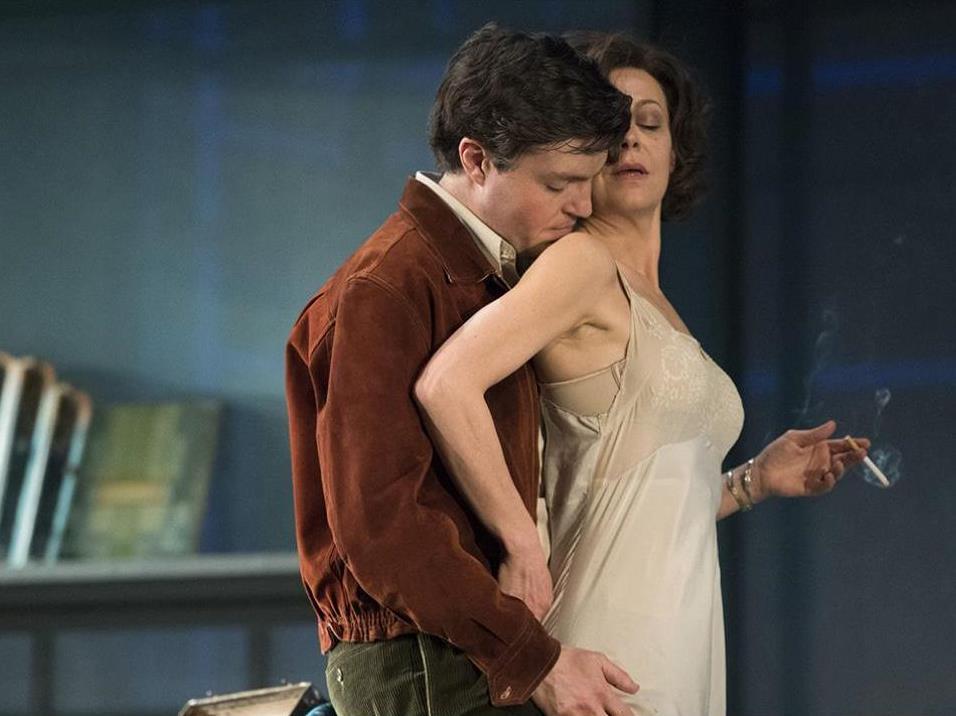 A familiar story of unmet love plays out in The Deep Blue Sea, the famous play by Terence Rattigan informed by a relationship he was involved in himself. The Deep Blue Sea is set in London in the early 1950s – Hester (the magnificent Helen McCrory) is in love with Freddy Page (Tom Burke), the man for whom she left her establishment husband Bill (Peter Sullivan). Page, a former test pilot, was once charismatic but his finest moments are behind him and he has descended into drink and gambling. As a human being Page simply isn’t Hester’s match; even the intensity of their initial physical attraction is waning as they are each subsumed by the relationship. Realising this Hester attempts to gas herself on her birthday after Page forgets to come home to her. However, Hester forgets to load up the gas meter in her flat and the play opens the following morning when she is discovered on her floor by her landlady, Mrs Elton (Marion Bailey, who skilfully avoids coating a post-war London character with cliché).

Carrie Cracknell directs this emotionally riveting, pacey revival of The Deep Blue Sea for National Theatre Live, referencing the era but giving it a timelessness that seems familiar. Much of the tension of this production is owed to the attractiveness of Sullivan as High Court Judge Bill in comparison to Page’s declining Freddy. Hester has left not only a husband but a comfortable middle class lifestyle and this production almost fails in convincing us that they’ve nothing left to offer each other. But Hester cannot return to respectability and and there’s an ugly finality to the scene where Bill realises this and leaves her for good.

McCrory’s performance is a triumph; she’s satisfyingly textured, and comes across as complex and convincing, in turns subtle, abject and dignified. Nick Fletcher is strong yet understated as fomer doctor Miller, a character with his own tragedy behind him; a quietly fabulous performance. His unequivocal advice to Hester at the end finds a home when he reminds her of her artistic talents, and we are left with the sense of life having its own momentum. Miller and Hester have already abandoned respectability. The conventional  repressed middle class is represented by unhappily married neighbouring couple, Philip and Ann Welch (Hubert Barton and Yolanda Kettle).The dialogue in this play concerns the goings on of the story, the narrative is laid out before us in what feels like (but isn’t) real time.

There is so much blue watery and airy space around the action (the setting of Ladbroke Grove flats is designed is by Tom Scutt), that moments of intimacy on stage seem fragile and tenuous; interactions between characters have an isolated quality reminding you of the ephemeral reality of life. The upstairs characters appear like lonely ghosts through translucent screens.

The Deep Blue Sea makes you think of Oscar Wilde and Bosie (Lord Alfred Douglas) and their public story of destructive passion. There’s nothing comparable to the devastation of being undone by obsessive love, and this production allows for the full impact of this common human experience. Hester is left with little but her art, which may be enough.