Surfers, scientists and activists shine in these terrific films about Australian women. Be inspired, challenged and informed while you look forward to a time when we don't need a Women's Day.
Rochelle Siemienowicz 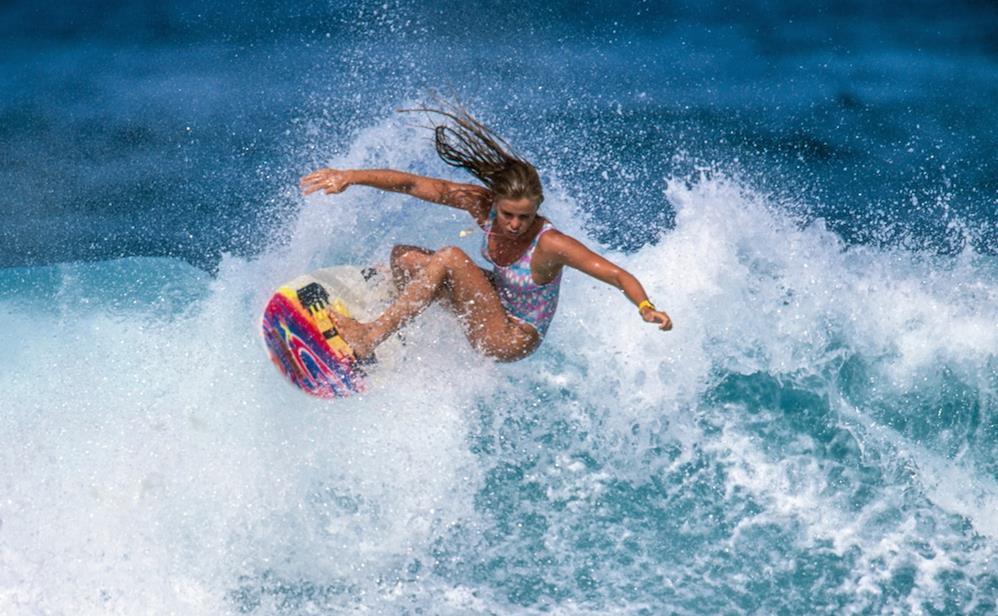 International Women’s Day is Monday 8 March and it’s a chance to highlight some films that focus on the achievements of fierce, fabulous women, and the challenges they still face for equality in every arena. Here are three newish films on our radar this year.

The idea of taking 76 female scientists from around the world on a 20-day cruise to the Antarctic, while also schooling them in ‘leadership skills’, sounds like a positive one. Australian CEO and ‘dreamer’ Fabian Dattner is the leader of this voyage, but her gung-ho tactics and abrasive personality put her at odds with many on board. Generational differences in style and a lack of proper processes around trauma almost sink the cruise, but the support the women offer to each other keeps it afloat, and Dattner is no simple villain.

This is a fascinating and sometimes heartbreaking look at what’s happening to bright young women pursuing careers in STEMM (Science, Technology, Engineering, Mathematics & Medicine). Facing insecure contract-based employment and the requirement to publish or perish, they’re also experiencing shockingly common sexual harassment. These issues are borne out in personal stories, and also in the statistics presented in the film.

The pristine beauty of the endangered Antarctic and its stunning marine creatures provides moments of humour (watch for the scientists clamoring at  windows to see whales breaching, while Dattner insists they focus on their homework). The landscape works as a reminder of what we are up against environmentally, and the need for our brightest minds to be employed to find solutions.

Directed by filmmaker Ili Baré, who won the Eureka Prize for Science Communication and Journalism for her work on Becoming Superhuman (2017), The Leadership is produced by Greer Simpkin of Bunya Productions.

The Leadership is available now on DocPlay, iTunes and Google Play. You can also request cinema screenings and look out for more festival screenings. (Bonus viewing suggestions from producer Greer Simpkin who curates a DocPlay selection here.)

This is the story of the fight by female surfers to be taken seriously. It begins in the 1980s, where the world of professional surfing is full of peroxided hair, fluro colours and strutting male egos. The women are forced to hold competitions during the men’s lunch breaks, and their bikini bodies are critiqued more than their sporting ability.

Brazen Hussies (in cinemas and iView)

Even the most ardent contemporary feminists might be surprised at parts of this history of Australian activism between 1965 (when women chained themselves to bars for their right to drink with the blokes in their local pub) and 1975, by which time the Whitlam Government had enacted huge social changes including no fault divorce and free university education.

Written and directed by Catherine Dwyer and produced by Andrea Foxworthy and Philippa Campey, Brazen Hussies uses rare archival footage and contemporary interviews with many of the women involved, now older but still full of fire. The film shows how a small band of women organised around issues like equal pay, childcare, reproductive rights and prevention of family violence, and through collective action turned the tide of history, as these demands went from being dismissed as ridiculous to being accepted elements of political policy.

This film had me in tears of admiration and gratitude

Brazen Hussies is above all, enormous fun, and it doesn’t skirt over the many conflicts and contradictions within the movement. (Should boy children be allowed at female-only communes?) It’s a fitting tribute to the mothers of Australian feminism who paved the way for our current freedoms, as contested as they feel right now. This film had me in tears of admiration and gratitude, and served as a reminder of the power of ordinary people when they get together. It should be required viewing. Take your daughters, take your sons.

Brazen Hussies is having many screenings around the country to coincide with International Women’s Day. Details here.

Brazen Hussies is also coming to ABC iView on 8 March.

Me Three: A Triple Bill for IWD (The Capitol, Melbourne)

If you’re in Melbourne, some bonus feminist films are coming to The Capitol in celebration of International Women’s Day: ‘a triple bill of screenings and conversations about the legacy of feminism and how it connects with younger womxn today.’

Screenings of Brazen Hussies (2020), She’s Beautiful When She’s Angry (2014) & We Aim To Please (1976) will be accompanied by filmmakers and feminists in conversation about the legacy of feminism and how it connects with younger women now.

The first session features a screening of Margot Nash and Robin Lurie’s experimental short We Aim To Please together with Catherine Dwyer’s Brazen Hussies and the filmmakers in conversation. 6pm, Thursday 11 March. Robin Laurie, Barbara Creed and Catherine Dwyer will be in a conversation led by Vy Wijekumar.

The second session sees a screening of She’s Beautiful When She’s Angry, the story of second wave feminism in the US, introduced by associate producer Catherine Dwyer. 6pm, Friday 12 March.

Read: Why don’t you…? Twenty extravagant ideas for International Women’s Day and beyond