Mental Health Watch: This Way Up, Couples Therapy and Wakefield

May is Mental Health Awareness Month, and there's no shortage of TV characters who struggle, fall and rise again. Here are three shows to check out.
Rochelle Siemienowicz 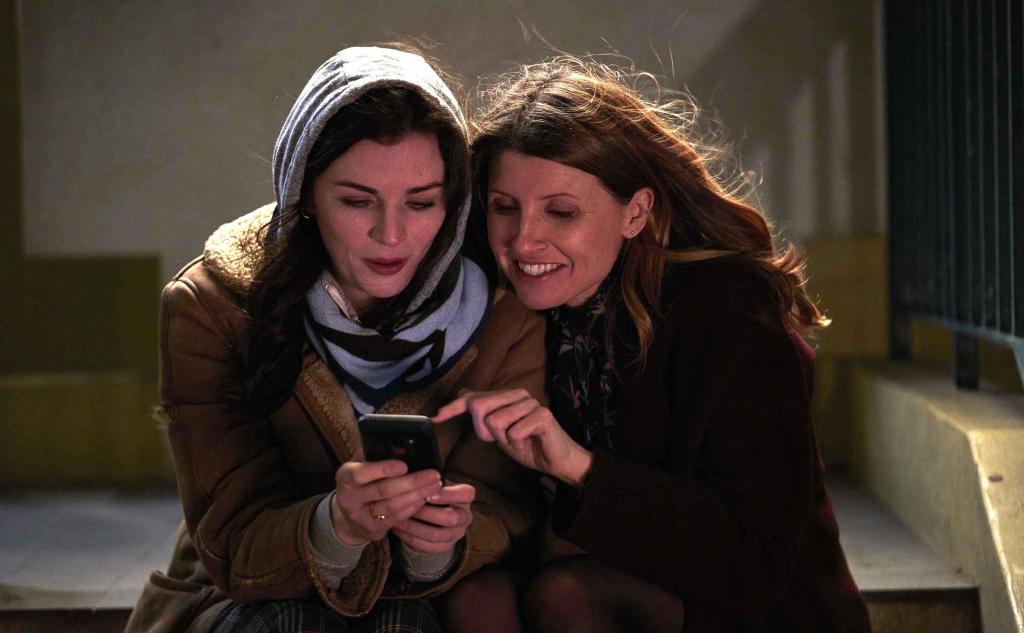 Sisterly love is part of the problem and the solution in This Way Up (Stan).

[Warning: This article mentions suicide and mental illness. If you or anyone you know needs help, contact Lifeline on 13 11 14]

That was the essential underlying question in Andrew Denton’s legendary celebrity interview show Enough Rope, which aired on the ABC between 2003 and 2008. The starting premise for those penetrating conversations was that no matter how rich or famous you are, every single person must eventually grapple with emotional pain and disturbing questions of existence.

Was does it mean to be mentally ‘healthy’? And what exactly is mental illness? The answers are socially defined, and different according to each historical period and culture. But by any measure, a significant proportion of us now suffer from some kind of mental dis-ease during our lifetime, whether it’s anxiety, depression, bi-polar or full-blown psychosis.

Perfect mental health might be as elusive as perfect physical health.

The proliferation of Mental Health ‘Awareness’ days and events suggests the hugeness of the issue. May is widely considered to be Mental Heath Awareness Month, though the 10th of October is officially World Mental Health Day, and World Mental Health Week is 9 – 17 October. Not to mention RUOK day, which is 9 September. Perhaps we should consider every day a day for awareness and check in more regularly with ourselves, our friends and co-workers. I’ve adopted a habit with some friends of asking each other every few days for a number out of ten to indicate our moods. Simply texting a number and getting one back is sometimes enough to give comfort.

no matter how rich or famous, every single person must grapple with emotional pain and disturbing questions of existence.

You will have heard the grim statistics ad nauseum, but here they are again: In Australia, one in five of us is affected by mental illness each year, yet many don’t seek help because of the stigma. Speaking personally, I felt like a freak back in the 1990s when I first took antidepressants and visited a therapist because sometimes I wanted to die. It was a terrible, shameful secret. These days it seems more normal to admit problems and struggles, though perhaps that is just within my own privileged middle class bubble, with access to doctors, counselling, yoga and mindfulness apps.

According to the Black Dog Institute, each year more than 65,000 Australians attempt suicide, and it’s the leading cause of death for Australians aged between 15 and 44. And for those of us in the arts and screen industry, in comparison to the general public, we have double the rates of suicidal ideation, 10 times higher anxiety symptoms, and five times higher depression symptoms.

Part of the human condition, part of TV storytelling

If mental illness is part of the human condition, it’s no surprise to find that film and TV characters also frequently live and struggle with ongoing mental health issues. Where would drama or comedy exist if every character was well-adjusted and secure?

Hannah from Girls lives with Obsessive Compulsive Disorder (OCD). Jessica Jones has Post Traumatic Stress Disorder (PTSD), as does The Unbreakable Kimmy Schmidt. Jackson Marchietti, the high school star swimmer in Sex Education is crippled with anxiety and driven to self harm; while Claire Danes’ character in Homeland is both brilliant and troubled with Bipolar Disorder. In The United States of Tara, Toni Collette’s character is a wife, mother and professional living with Dissociative Identity Disorder (formerly known as Multiple Personality Disorder), while more recently, Luke Eve’s I Met a Girl on Netflix is a love story involving a character with Schizophrenia. In After Life, Ricky Gervais is a widower suffering from severe depression and suicidal wishes, yet managing to find comedy in this despair. Same goes for the animated has-been Bojak Horseman. Comedy and depression seem to go hand in hand. Life is very funny, and also very sad.

Where would drama or comedy exist if every character was well-adjusted and secure?

The sheer profusion of characters living with mental illness is not to say every show deals with it well. Kristen Dunphy, the writer and creator of Wakefield, the ABC drama set in a psychiatric hospital told Screenhub recently that it is hard to convey the complexity and ongoing nature of mental illness within the required confines of traditional narratives. For example, ‘With procedural drama you’re relying on solutions, often within an episode and you’re just not going to get that with mental illness, because it’s not a quick fix. It’s very very complex. You can’t just throw someone on a table and operate.’

For a list of TV shows that deal well with mental illness, this list of Ten TV Shows that Got Mental Illness (Mostly) Right is pretty good and has been cannibalised all over the net. A frequent addition to such lists is Australian Josh Thomas’s Please Like Me, a comedy about a group of confused twentysomethings, and featuring a suicidally depressed mother. Thomas’s more recent work in Everything’s Gonna Be Okay (Stan), deals with a group of characters living with grief and in some cases autism. It has been described by our critic Anthony Morris as ‘a safe place’. Morris writes: ‘Pretty much all scripted entertainment is selling a fantasy of some kind. The reality on offer here is an emotional one, one where relationships are cosy but difficult and dreams are enough to live on so long as you can keep them alive in your heart.’ A necessary fantasy, some might say.

Read: The Show Must Go On – but at what cost?

Below are three shows around mental health that I’m watching and enjoying right now. They make me feel less alone and normalise the fact that life is indeed tough, and we’re all a bit strange; that it’s okay to have hard days and need help sometimes. And a laugh really, really helps.

This Way Up (Stan)

Irish comic actors Aisling Bea and Sharon Horgan (Catastrophe) star in this bittersweet and often hilarious British comedy about two siblings living in the aftermath of a nervous breakdown. Episode one starts with Aine (Bea) checking out of the psychiatric hospital and making complaints about the food and lack of spa facilities. Her protective older sister (Horgan) moves between exasperation and sympathy, showing the bond between them as strong, funny and very complicated.

Back in normal life, we see Aine’s ups and downs. She’s a gifted teacher and connects instantly with life’s more sensitive souls. We see the way she makes a joke out of everything, even while her heart is breaking and she’s crippled with loneliness. The story also shows the toll her dependence takes on her more ‘together’ sister.

This is one of those shows that conveys the real hard work of day to day mental health struggles, and the way a darkest night can turn into a moment of transcendence with a laugh or small gesture of friendship.

As Craig Mathiesson wrote in his Binge-r review, ‘The appreciation of mental health struggles is genuine… The narrative deftly includes personal tangles, including an unexpected relationship opportunity for Shona and a London backdrop that acknowledges the street dynamics of Brexit. The most intriguing foil for Aine is Richard (The Crown’s Tobias Menzies), a stricken father to a French son he barely knows, Etienne (Dorian Grover), who reluctantly hires her as a home tutor – their exchanges in the first episode are so at odds that you’ll want to cover your eyes even as you judge their ultimately compatibility. Prepare yourself for Sorcha Cusack as Eileen, the duo’s mother, and some developments that you can see coming but still feel the impact of. This Way Up can be sarc-y, sassy, and a punch in the face.’

Originally aired in 2019, all six episodes are available now, with a second series coming soon. This Way Up is chicken soup for the weary soul.

Set in a psychiatric hospital in the picturesque Blue Mountains in NSW, this 8-part ABC series boasts a wonderful big ensemble cast, none of whom could be described as completely ‘sane’. The spectrum between mental health and illness is presented as just that: a spectrum which characters might move along within the course of an episode. The lead character is star nurse Nik Katira (Rudi Dharmalingam) who seems to be the answer to everyone’s problems, able to calm even the most distressed patients. But even he is slowly disintegrating and needs to ultimately accept help to solve the puzzle of his own crisis. It’s a mental health mystery that destigmatises a number of issues and disorders without ever reducing the characters to their diagnoses.

It’s inside our romantic relationships that mental health problems express themselves most clearly. In this fascinating 10-episode US Showtime documentary series we enter the secret space of the couples therapist’s office to watch real drama play out on the couch with a diverse collection of couples.

On show are anxiety, addiction, depression, PTSD and rampant narcissism, but also commitment, endurance, courage and passion. Accompanied by her wide-eyed husky dog who looks stunned at the secrets revealed, Dr. Orna Guralnik guides couples (according to the SBS blurb) ‘through the minefield of honest confrontation with each other and with themselves, revealing the real-life struggles and extraordinary breakthroughs typically hidden behind closed doors.’

Some of these characters are truly appalling and it’s fun to judge, but mostly, the series shows how difficult genuine intimacy can be, even when we love our partners. Most revealing are the segments where Guralnik debriefs after work with her own supervisor, revealing misgivings and discouragement at the entire project of  ‘fixing’ relationships. It makes for compulsive viewing, and may even have the helpful side effect of increasing your emotional literacy.