Set in the Gothic heartland of Tasmania, this murder mystery is yet to deliver on its supernatural teaser, says Mel Campbell.
Mel Campbell 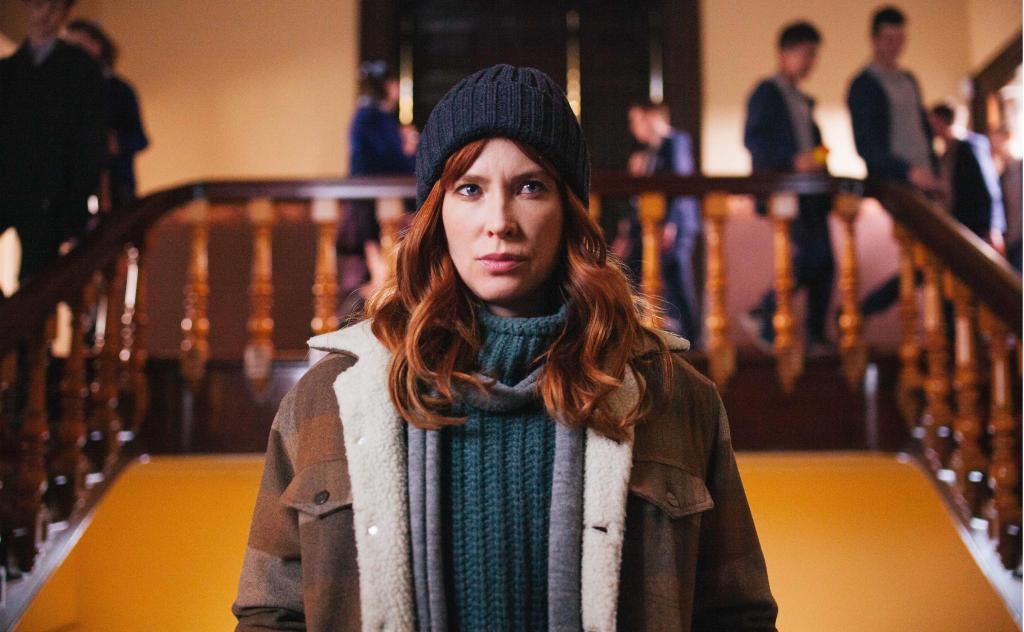 You know how it goes. An unidentified woman is found brutally murdered in a rural setting, and a duo of cops who share a tragic past must reluctantly team up to solve a crime that quickly gets personal. As they face their own demons, they uncover corrupt local politics and an insidious secret society that likes to lurk about, wearing masks and hoodies and leaving menacing symbols that puzzle our doughty detectives, but that absolutely terrify the townsfolk who know where the true nightmare lies…

Like many of the best thrillers, The Gloaming is about that twilit threshold between worlds, where appearances deceive, loyalties are blurred, and bad things seep into the daylight world of the living and lawful. It begins with a flashback to 1999, when two teenagers, Jenny McGinty (Milly Alcock) and Alex O’Connell (Finn Ireland), hike to a creepy old mansion surrounded by mouldering tombstones with ominous inscriptions.

The place was not abandoned: Jenny is murdered, and Alex is traumatised. As an adult (now played by Ewen Leslie), he broods symbolically in the NGV over the grimly bathetic painting Anguish. It’s clear Alex sees himself in the grieving ewe guarding her dead lamb from encroaching crows. He’s a Victoria Police detective – but his boss, Chief Inspector Lena Madison (Ling Cooper-Tang), is sending him back across Bass Strait to help out on a mysterious murder case.

Meanwhile in Hobart, damaged but driven police detective Molly McGee (Emma Booth) obsessively surveills the chic home of property developer Gareth McAvaney (Martin Henderson), breaking in and rearranging his things. Molly is a grim loner, perennially rugged up in a beanie and scarf like Australia’s answer to Vera. Later, McAvaney spots her in her car and they exchange a fraught glance. What’s their deal?

The nature of Molly’s and Alex’s shared past was also unclear to me after three episodes. They’re clearly shaken to see each other, and their junior colleague, Oscar (Max Brown), later observes to fellow detective Freya (Zenia Starr) that Molly and Alex had reacted like ex-lovers. (“Like you’d know,” Freya scoffs.) Alex has also named his cat after Molly – a fact he hides from his brother (Nathan Spencer).

Hobart’s a small city, but it’s still a city, which is why The Gloaming’s small town atmosphere struck me as odd. Everyone seems to know everyone else, in ways that seem a little too convenient. Even Molly’s boss, DI Lewis Grimshaw (Aaron Pedersen), graduated from the police academy with Alex’s boss Madison, and Grimshaw’s very first case was the murder of Jenny McGinty.

The three episodes provided to critics have barely delivered on the Wicker Man-like folk-horror imagery promised by the trailer. Instead, this is a slow-building tease of ominous motifs and symbols: crows, lucky cats, chalked sigils, chess pieces, earrings, hanging bottles and crystals, and religious incantations like “let the dead bury their dead”.

The show is gorgeously shot, making the landscape seem almost sentient. Rolling mists cover forests like spectral exhalations; people gaze over restless water while the forested mountains watch them; monumental concrete dams bisect chilled rivers. The soundtrack echoes with wind chimes and the mournful cries of crows. It definitely feels like the sort of place where a uniquely British blend of Christian and occult beliefs might flourish ferally amid primeval natural beauty.

The shape of the mystery is still lurking in the mist, though two key villains are emerging. Freddie Hopkins (Matt Testro) is a creepy weirdo from Incel Casting whose mother runs Molly’s local fish-and-chip shop. Freddie has attached himself to troubled foster kid Daisy Hart (Markella Kavenagh), in whom Molly has a slightly more than professional interest – perhaps because Molly’s divorce has alienated her from her own daughter, 14-year-old Lily (Josephine Blazier). Freddie has his sex-pest eye on the precocious Lily, too.

Also up to no good is Grace Cochran (Rena Owen), who runs the local church community centre, and knows both Daisy and Lily. Grace seems harmless… except for her recommendation of ‘special broth’ recipes, her surreptitious phone calls, her habit of praying with heaps and heaps of candles, and the way she smiles creepily while staring out through windows.

At this stage in the series, I’m genuinely uncertain if it will contain any supernatural elements – if the hooded figures of the ‘Gloamers’ that stalk various characters might actually be ghosts. But I suspect Madden is playing it realist, focusing on the kind of horror that humans inflict on one another.

The show’s colour-blind casting has created a welcome racial diversity that only makes it more striking that so many characters’ surnames are English, Scottish and Irish. Grace, for instance, seems obsessed with genealogy. So much in The Gloaming refers to Tasmania’s convict past, yet there’s no talk of Palawa people. Perhaps the remaining episodes will better grapple with the legacy of horror that comes of importing European beliefs to an ancient land where they don’t belong.

All 8 episodes of The Gloaming premiere on Stan on 1 January 2020.