TV Review: ‘Stateless’ is gripping to the very end

A fistful of narratives converge in a searing portrait of absurd and brutal immigration policy.
Chris Boyd 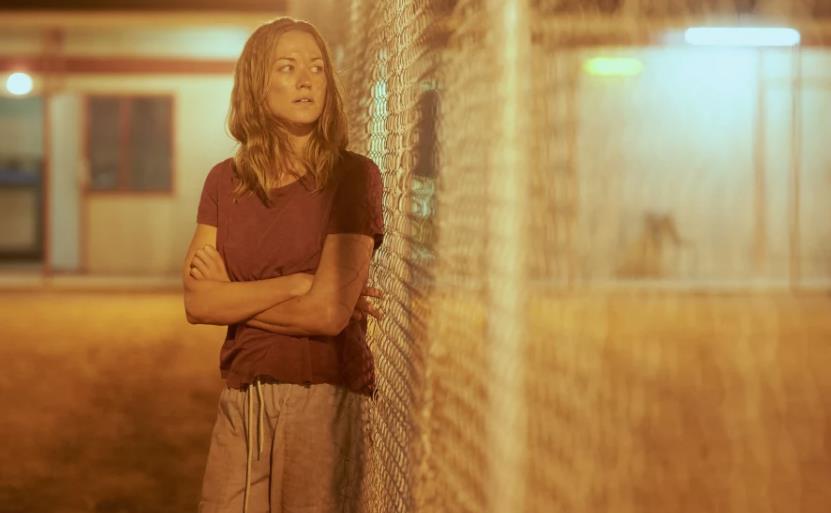 “We have to close the distance between the push-button order and the human act. We have to touch people.” – Jacob Bronowski, The Ascent of Man

There isn’t a decision maker to be seen in Stateless, ABC TV’s new six part drama which premieres on Sunday. No Prime Minister Howard. No Amanda Vanstone (then Minister for Immigration and Multicultural and Indigenous Affairs) or her immediate ministerial predecessor turned Attorney General Philip Ruddock. The nearest we get to the policy makers in the dramatis personae is a departmental assistant secretary played with serpentine and icy professionalism by Sarah Pierse. All are merely doing their jobs – implementing policy or obeying orders – in the great buck-passing tradition of trickle-down brutality. It’s like the 1963 Milgram Shock Experiments taken to an institutional and national level.

A fistful of narratives converge at an isolated detention centre in South Australia. Unlike the centre which it modestly fictionalises, Barton is for new arrivals as well as long-term detainees. (The real world Baxter Immigration Detention Centre was an “abandon all hope, ye who enter here” hell hole for the longest-term “unlawful non-citizens” in 2004/2005.)

In Stateless, we follow the misfortunes an Afghan family – Ameer (Fayssal Bazzi), his wife and daughters – as it makes its way to Australia via Pakistan and Indonesia, only to reunite behind the razor wire. We also follow Cam (Jai Courtney), a struggling family man persuaded to take a well-paying entry-level job at Barton, whose gentle temperament is hopelessly unsuited to the demands of the new job.

Cam’s first day at the metal-detecting front-line coincides with the arrival of a mysterious and unstable woman (Yvonne Strahovski) who claims to be a German backpacker and who, uniquely, is eager to be deported. But ‘Eva’ (as Sofie Werner calls herself) is unable – or unwilling – to establish her identity.

Sofie is, of course, a modestly fictionalised Cornelia Rau, the Australian citizen who spent seventeen weeks at Baxter between October 2004 and February 2005. Rau had, in fact, been held at Brisbane Women’s Prison for more than six months prior to her transfer (sedated and restrained) to Baxter after she was detained on suspicion of being an unlawful non-citizen under section 189 of the Migration Act. As Robert Manne wrote, in 2005, had Rau been detained on suspicion of a serious criminal offence, she would have been given the presumption of innocence, the right to both legal representation and a court appearance, even bail, and the right to plead innocence on the grounds of mental health. But non-citizen = non-person after Tampa and 9/11.

Amid the Kurds, Tamils and middle eastern refugees, Eva – a tall and unruly blue-eyed blonde – is a troubling and trouble-making enigma. Javad (Phoenix Raei), an Iranian, says to her: “When you get out of here, and you will, people will be very interested in you. They will want to know why someone who looks just like them [is] trapped in a place like this.” You will be “our voice,” he tells her, “the face of our suffering.”

That’s an inconvenient narrative reality in prime time TV: that a white woman must be our way in to the plight of our refugees. A disproportionate amount of screen time is inevitably devoted to Eva and, to a lesser extent, Cam. Rau’s bizarro story is, unquestionably, stranger than fiction. It involves a fair dinkum NXIVM-level cult (which required inductees to provide compromising secrets which allowed for the discrediting of any future defectors), an alleged sexual assault, and a very public humiliation at the hands of the elderly leader at a Kenja eisteddfod. (Seriously, you wouldn’t make this shit up!)

In the (again modestly) fictionalised screen version, the cult leader and his wife are played by a sublimely sleazy Dominic West and Cate Blanchett, all sequins and horsey grins. Given Eva’s increasing mental instability, there are moments when things get decidedly Dennis Potter-esque. (Not so much Singing Detective as dancing detainee.)

Strahovski is flawless – beyond the boldest of superlatives – in the load-bearing role of Sofie/Eva. Given the extremities of her character’s euphoria and abject despair, and the vertiginous swings of her moods and fate, this is a dream role. But it requires, and gets, a kamikaze commitment from Strahovski. She’s let down, somewhat, by the inexorably slow reveal of (and excruciating repetitions detailing) Sofie’s assault.

The writing for Cam and his working class mates is far subtler and far stronger, both authentic and unpatronising. His gradual corruption, if that’s the word, is credible. Courtney isn’t an obvious choice to play a bashful and conflicted family man, but the against-type casting (Allison Meadows/Mullinars) pays off handsomely.

The rendering of the roles of Ameer and his daughter Mina (Soraya Heidari), in particular, and the whole spectrum of detainees at Barton, is extremely strong and, for the most part, cliché free. But, when juxtaposed with the detail and accuracy of the Cornelia Rau strand of the narrative, these characters feel more contrived – more constructed – than they would if this were an entirely fictional world.

I can’t help wishing the creators (Blanchett, Elise McCredie and Tony Ayres) had been more daring in their aspirations, maybe splicing in an anachronistic real world character like Behrouz Boochani, laboriously writing his Manus Island memoir one SMS at a time. But the action of Stateless floats in a temporal and moral void, before we took “out of sight, out of mind” to new heights with the off-shore processing of boat arrivals.

Stateless bends over backwards to avoid commenting on these events, let alone moralising or hectoring its audience. Nor does it judge its protagonists. (Some, eventually, judge themselves. Others courageously confront their peers and superiors.) It’s up to viewers to make connections and value judgements, to notice how straitjacketing employment is. Time and time again, we see orders meekly obeyed by men and women who can’t afford to risk their twenty year careers, like Clare Kowitz (Asher Keddie), or the income they depend on to feed their young families, like Cam.

Despite its conspicuous and nagging conceptual flaws, the realisation of the series is excellent. Cinematography (Bonnie Elliott), direction (Emma Freeman and Jocelyn Moorhouse, three episodes apiece), editing (Mark Atkin and Martin Connor, ditto) and sound design (Tom Heuzenroeder with composer Cornel Wilczek) are the match of any major Australian – or, indeed, international – production.