TV Review: ‘Shaun Micallef’s on the Sauce’ to keep you off

The well-loved comedian takes a serious but entertaining look at Australia's relationship with alcohol.
Anthony Morris 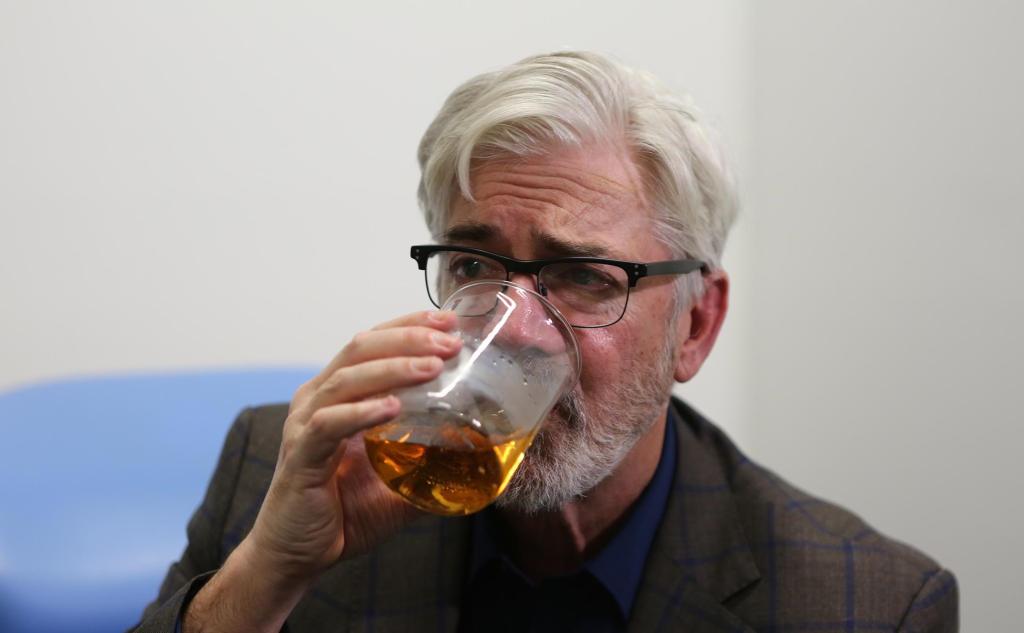 Not a big fan of the grog. Shaun Micallef’s on the Sauce, courtesy ABC.

Shaun Micallef isn’t a fan of alcohol. This pleasant ramble through Australia’s drinking culture couldn’t work any other way: good luck getting the ABC to run a three part documentary series that actually comes out in favour of alcohol consumption. The only real way to create any kind of dramatic tension covering a topic like this is by running counter to expectations, and as it’s generally assumed that Australians like a drink (though this series serves up plenty of evidence that this is increasingly not the case) then giving the thumbs down to getting on the grog is inevitable.

Not that this is some kind of anti-alcohol screed. While he’s best known for his comedic look at news and current affairs on Mad as Hell, Micallef himself has serious reasons for being wary of the demon drink. His youthful experiences with it seemed to have more to do with getting blackout drunk than enjoying himself, and he gave it away at his first serious embarrassment – which does provide an excuse to show some clips of him appearing on the ABC’s Theatresports in the mid-80s,

He comes across personally as more vulnerable here than his other media outlets, though it’s mostly expressed through a general awkwardness around people who are drinking. In a way, his restraint here is quite telling; it’s not surprising that someone so reserved personally might find alcohol not to his taste, and the sequence in episode two where a somewhat terrified Micallef takes a drink for the first time in almost 30 years is a highpoint of the series.

The sequence in episode two where a somewhat terrified Micallef takes a drink for the first time in almost 30 years is a highpoint of the series.

Much of the first episode involves Micallef visiting various examples of Australian drinking culture – a boozy 18th birthday, a boozy B&S ball, a boozy pub crawl with a woman’s soccer club – and watching on slightly nervously while everyone else drinks to… well, moderation? There’s no comedy vomiting here, or drunken proclamations of love; just a genuine interest in looking at an aspect of Australian culture that Micallef makes clear he keeps at a distance. And going by his expressions in some of the scenes, he’s keen to keep it that way.

He seems on steadier ground talking about alcohol in Australian film with Jack Thompson, and when things turn serious with a look at diseased livers and chronic alcoholism later in the first episode, Micallef’s air of vague concern finally finds a subject it suits (his pride in the healthy state of his booze-free liver is also very endearing). Even when comedian Dave Hughes make an appearance later on, he’s not really firing out the gags; Hughsie has been off the booze himself for a number of years, and makes the interesting point that he personally replaced drinking with performing, as far as addictions go.

The upshot is that anyone going into On The Sauce expecting a comedy will be disappointed, as this is firmly in the documentary tradition of ‘comedian examines serious subject in a way that audiences probably wouldn’t tune in for if it wasn’t hosted by someone funny’. Which doesn’t mean it’s humour-free. Micallef himself is always keeping an eye out for a chance to crack a joke or pull a face, and the voice-over (by him) has some good lines scattered throughout: ‘I’m led to believe that Australians, apart from me, love sport’ is a personal favourite.

At three 50+ minute episodes this is definitely comprehensive, and much like Micallef’s own experiences with drinking, possibly too much of a good thing. Covering everything from this history of Australian drinking to how alcohol advertising works by linking drinking to moments of emotional arousal (and that’s just the first episode), it’s the kind of series that invites reviewers to attempt easy jokes about getting drunk on knowledge.

Even the personal elements, which can often feel shoe-horned in this kind of project, feel intrinsic to the series’ approach. Whether he’s looking worried at some drunk young folk, or looking concerned at a range of grim slices of diseased livers, Micallef really does come across as a genuinely concerned parent who wants to learn about drinking so he can guide his teenage sons through it. Or maybe just come up with some convincing reasons to keep them off the sauce.

Shaun Micallef’s on the Sauce
Australia, 2020
A CJZ Production for the ABC
Written by Shaun Micallef and Anthony Griffis
Producers Shaun Micallef, Paula Bycroft, Andrew Farrell and Michael Cordell.
Airing Tuesdays at 8.30 on ABC and iView