Eccentric nuns defend their way of life with devilish consequences, in Foxtel's new mini-series adaptation. Chris Boyd says it pays big dividends despite some clumsiness.
Chris Boyd
[This is archived content and may not display in the originally intended format.] 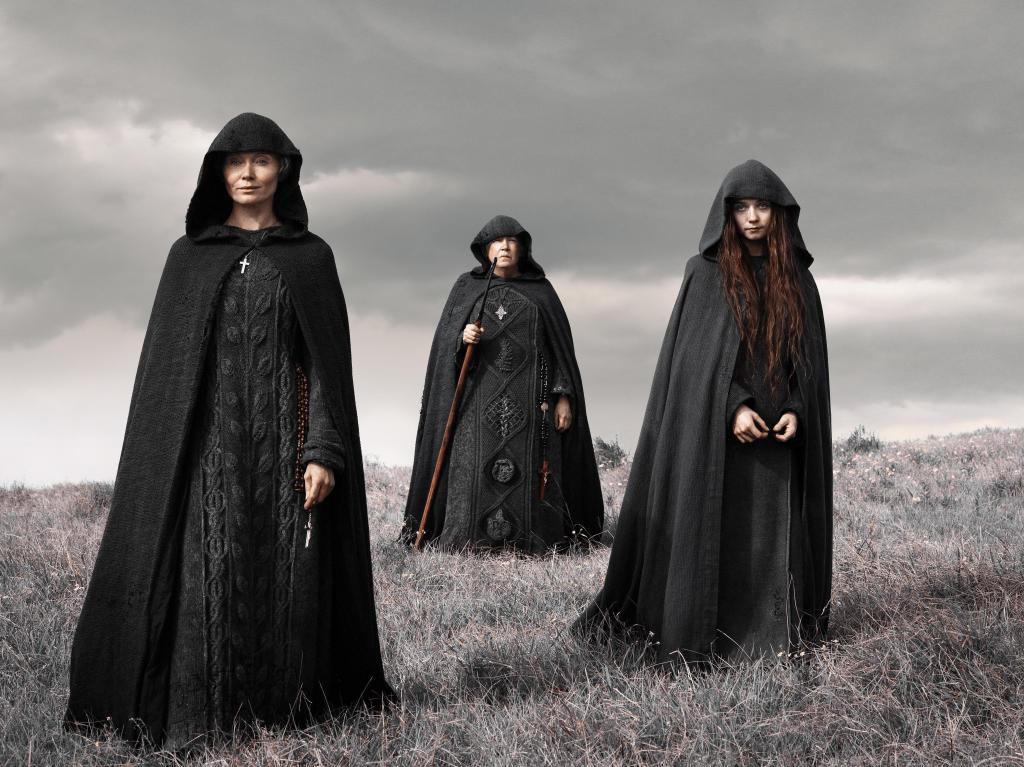 When a Bishop’s secretary comes to assess a derelict and isolated monastery belonging to a closed order of nuns – an order believed to have died out years before – the man finds sheep roaming the cloisters and trio of women who eat “like pigs at a swill trough” and who have long ago dispensed with their formal robes. They welcome him rather like Kathy Bates welcomes James Caan in Misery, but with a little less fangirl respect. Father Ignatius imagines he can tempt the women back to the mainland with promises of clean sheets, electricity and modern life. You can eat the sheep if you want, he says casually.

To sisters Carla, Iphigenia and Margarita, the black and white sheep are reincarnations of their dearly departed sisters… though they’re not averse to slaughtering the odd nun in the name of their patron saint. (Agnes, natch!) They’re avid knitters, too. In Marele Day’s 1997 novel, which this four-part series adapts, the women start off their knitting sessions with a recitation of verse in stitched-up iambic hexameter, to set the rhythm and pace of their work.

Like any sect long separated from the orthodox flock, eccentricities have crept into their observances. Their homilies are mostly customised fairy tales. They drink blood instead of transubstantiated wine. They pointedly pray to the holy mother instead of the big guy. And, shock horror, a woman says mass.

As the visitor, Sam Reid (Bloom, Prime Suspect 1973, The Astronaut Wives Club) looks like he could play the lead role in Wake in Fright. He huffily and boorishly hijacks the nuns’ routines expecting his priestly rank and the thing between his legs (“baby Moses in the rushes” in the awed words of the youngest, Carla, when she first spies it) will afford him some authority in this heretical parallel universe.

In a trice, he’s drugged and crippled and his Motorola MicroTAC (something of a dinosaur already, in 1999, when the action is set) is confiscated. His legs are plastered together in a merman fishtail as if he might end up crucified. And his abandoned hire car is pushed off a cliff.

Written by Sarah Lambert (Love Child, Love My Way) and directed by Jeffrey Walker (Rake, Jack Irish), Lambs of God staggers from superheated passion – like a modern-day take on the Joan of Arc story – to absurd bathos. (Ignatius ends up with a piss pot on his head, as a helmet, in his first Great Escape.)

Moustache-twirling wickedness and heart-rending naturalism never quite form a stable emulsion in the parallel plot line which centres on Ignatius’s alcoholic older sister Frankie (Kate Mulvany). Frankie’s search for her missing brother is first thwarted by a slack-arse copper (Daniel Henshall) and then by the bishop (a wonderfully malevolent John Bell) and his ‘fixer’ Father Bob (Damon Herriman reprising his Charles Manson schtick… again).

But, look, this destabilisation of tone and genre – clumsy as it seems and off-putting as it most definitely is – pays enormous dividends in the final chapter. So don’t be put off by the Fractured Feminist Fairytale biz or throw your remote control at the flat screen. The climax of the series is as ridiculous and harrowingly perverse – and as unexpectedly and utterly life-affirming – as Alan Arkin’s 1971 screen adaptation of Jules Feiffer’s play Little Murders or even Rolf de Heer’s 1994 masterpiece Bad Boy Bubby. It really needs to be seen with a crowd to activate its yeasty potential for mass hysteria.

The three generations of sisters – oldest to youngest – are played by Ann Dowd (Aunt Lydia in The Handmaid’s Tale), Essie Davis (Phryne Fisher) and Jessica Barden (co-star of 2018’s cult hit The End of the Fucking World) in a series of death-defying actorly feats… though all three, I’m shocked to say, required knitting doubles. Tsk, tsk, tsk. (I bet they all know how to fence!)

Cinematography by Don McAlpine (The Adventures of Barry McKenzie, Moulin Rouge, The Dressmaker) is tactful, breathtaking and gloriously sensuous. If you come to the series knowing Marele Day’s novel, McAlpine’s imagery is sure-handed, clever and wise. Here’s a D.O.P. who knows his material inside out.

Tasman Island and Cape Pillar, past Port Arthur, stand in for the fictional Isle of Cailleach, fittingly named after the Gaelic Goddess of Winter, and the tidal causeway. It’s a spectacular and staggeringly beautiful locale, well used.

Using a single writer, director and D.O.P. through the series definitely enhances shape and coherence, but it has rather entrenched some poor narrative choices which a writers’ room and show runner might have knocked out.