TV Review: Dom and Adrian 2020 is the quick comedy conclusion the year deserves 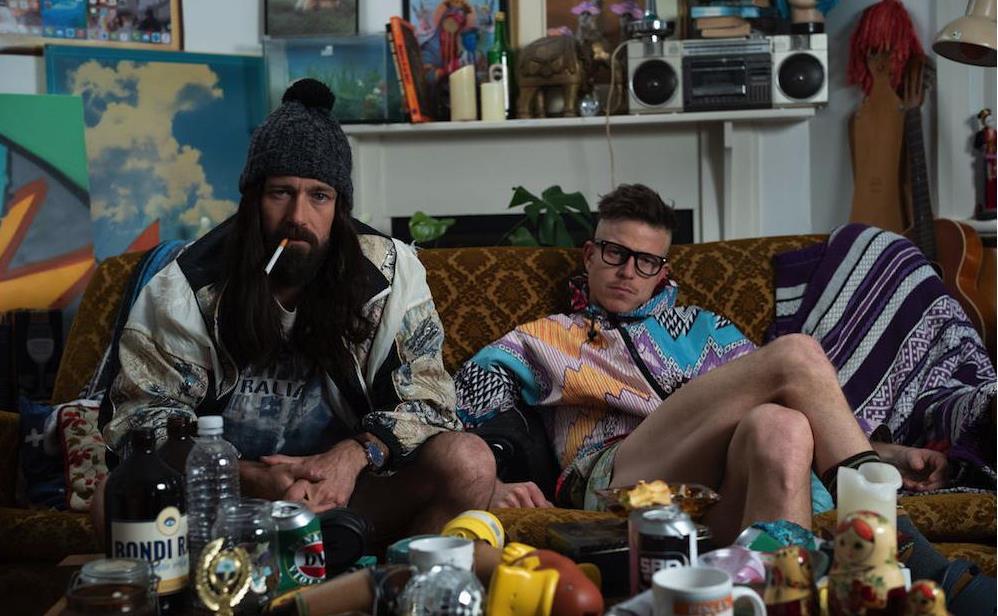 The Bondi Hipsters – Nick Boshier (Adrian, the rich one) and Christiaan Van Vuuren (Dom, the hairy one) – have been mocking trend-obsessed clueless inner-city types for close to a decade now. Their popular YouTube channel brought them to the attention of the ABC where they made two series of time-spanning comedy Soul Mates, but over the last few years, the ‘woke before woke was a thing’ duo have kept a low profile while their creators worked on other projects. Is their return on Stan now the comedy conclusion that 2020 needed, or just adding to our global nightmare?

Surprisingly for those who might have felt this particular joke had well and truly been played out, the mockumentary Dom and Adrian: 2020 is a solid, slightly over half-an-hour’s worth of rapid-fire comedy. It most definitely helps that they’ve got a lot to work with; having Dom find God then find Trump then inject himself with disinfectant within the space of 90 seconds makes for a pretty funny 90 seconds.

While this piles on the 2020-related comedy, there are also a few distinct plot threads that keep things moving forward. Adrian keeps getting calls from his ultra-rich dad, advising him to flee the coming apocalypse and hide out in his extremely creepy Illuminati bunker, while Dom rapidly breaks down once the money dries up and ends up moving into a recycling bin. Meanwhile, Adrian’s increasingly desperate attempts to get closer to Dom are constantly rebuffed, and making a YouTube cooking video that ends with him eating cake off his feet probably isn’t going to help.

The constant variety of jokes is a big plus here, with plenty of visual gags (that go well beyond just their respective wardrobes) and the occasional comedy song adding another layer to the mix. Occasionally the execution is a little forced: they do the old ‘someone says something harsh then the camera pans to reveal the person being spoken about is right there’ joke, only then the character says ‘that was a bit harsh, I’m sitting right here’. But there’s also a decent rant from the increasingly conspiracy-addled Dom about how cameras are popping up everywhere that goes exactly where it should in a mockumentary, but still gets a laugh.

There aren’t a whole lot of truly laugh-out-loud comedy moments here (though frying eggs with a 5G phone is pretty good), but there are an awful lot of decent jokes and this is definitely a case where quantity gets them over the line. Boshier and Van Vuuren know exactly how long to linger on a bit – Dom being ‘too old for Tinder’ could have been an entire episode, but throwing it away in a scene is better – and while the generally silly tone is spot-on, there’s just enough heart in the pair’s relationship to ground their wacky antics. Dom and Adrian are a pair of houseguests you wouldn’t want sticking around for too long, but this one-off return visit is just right.