We've had the books and documentaries, and now comes the dramatic feature film account of the Tham Luang cave rescue.
Glenn Dunks 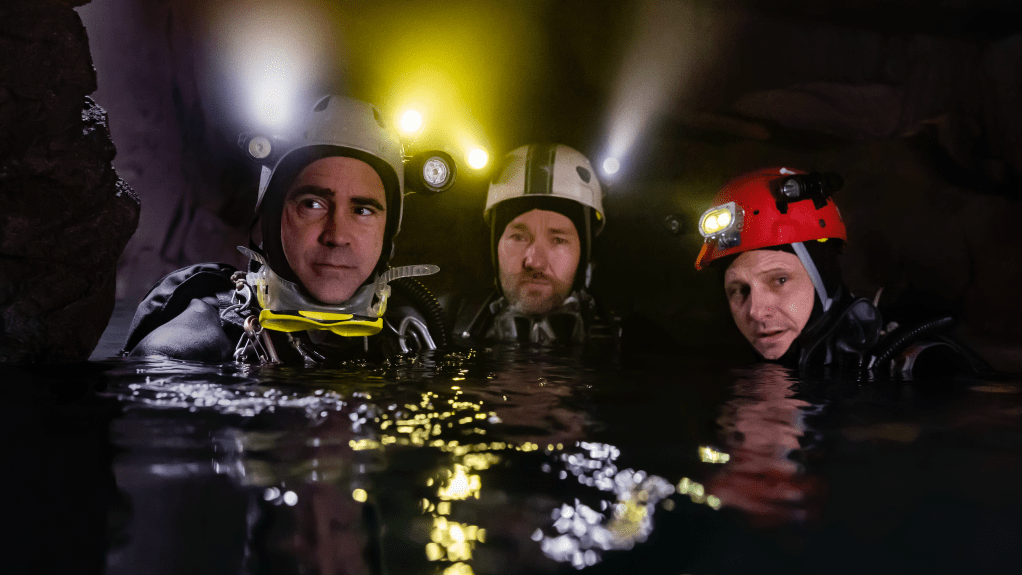 We’ve had the books and documentaries, and now comes the dramatic feature film account of the Tham Luang cave rescue that captivated the news cycle for three weeks in 2018. Some $13 million was spent luring the MGM production to shoot on the Gold Coast (additional filming took place in Chaing Rai province, Thailand), with Ron Howard’s Thirteen Lives giving some very talented Australian personnel the chance to show off their work in a big American picture that will launch globally on Amazon Prime Video this week.

Following a soccer match, 12 boys from the Wild Boars and their coach went exploring in a long chamber of caves beneath Thailand’s Doi Nang Non mountains. Despite being too early in the season for heavy rain, a monsoon hits and floods the 10km deep system, trapping them all inside. Local authorities, the Thai Navy SEALs and the Governor (Sahajak Boonthanakit, Only God Forgives) move on rescuing them all, but danger and a lack of experience in this particular kind of cave-diving thwarts their efforts.

Read: The Reef: Stalked is ‘certainly a different take on the genre’

Among the many who venture to the cave to offer their help is a British ex-pat, Vern (Lewis Fitz-Gerald, an Aussie legend from the days of Skyways, ‘Breaker’ Morant and a whole host of significant local television series over four decades). He suggests bringing in Rick Stanton (Colin Farrell, The Batman) and John Volanthen (Viggo Mortensen, Green Book) and later anaesthetist and future Australian of the Year, Dr Richard ‘Harry’ Harris (Joel Edgerton, Animal Kingdom) to hatch a plan for rescue against all odds.

A salute to Ron Howard

I actually have to admire Ron Howard. Hollywood more or less stopped making the sort of original grown-up character dramas that he was so successful at (Apollo 13, Parenthood, Ransom, A Beautiful Mind) and so he has had to adapt. After the financial disappointments of non-IP driven properties Rush and In the Heart of the Sea (both with Chris Hemsworth), Howard became something of a Hollywood director-for-hire.

He took over directing duties for Solo: A Star Wars Story and steered the trilogy of Dan Brown Da Vinci novel adaptations that proved so popular. He has moved into non-fiction, making numerous documentaries including Pavarotti and The Beatles: Eight Days a Week.

In 2020, he embraced streaming with the broad Hillbilly Elegy for Netflix. Meanwhile, his list of upcoming movies includes his first animated feature (The Shrinking of Treehorn, a co-production with Australia’s Animal Logic).

Thirteen Lives, then, is a bit of a return to his more classic Hollywood roots. There is an old-fashioned quality to it, even down to big international star Viggo Mortensen putting on an accent that doesn’t suit him much. Perhaps Howard was being trepidatious about returning to this style of filmmaking, though, because Thirteen Lives is more of a technical success than a creative or emotional one.

It lacks a certain energy that would allow it to rise above its true story beginnings like, for example, Danny Boyle’s 127 Hours. That movie, about a man trapped by a boulder, was infused with a flurry of sound and light that brought a genuine cinematic eye to its story of brave survival.

Thirteen Lives is well made, certainly. Particularly the heavily water-saturated sound design (it’s a shame audience won’t get the chance to experience it in a cinema) and Sayombhu Mukdeeprom’s cinematography, which manages to find light and shade within this dark cavernous terrain. But through its two-hour-plus runtime, it is relatively subdued affair, which can make the film come across as colder than was surely intended.

Howard and editor James Wilcox rush through the details early on, almost as if they wanted to make a miniseries instead of a feature film and needed to scrap all the contextual drama that usually makes for a satisfying experience. The pacing lends the film a procedural atmosphere with little time to spend on anything else except the direct matter at hand.

For example, while I am sure it was a choice made out of respect, we get no time with the trapped boys beyond the movie’s prologue. Similarly, the parents are prominent early one, but quickly fade from the attention of William Nicholson’s screenplay.

Even the people played by big Hollywood stars get little in the way of character development. We are offered slivers of backstory to Farrell, Mortensen and Edgerton, but mere morsels don’t offer anything sticky in the stakes department.

Thirteen Lives is also hampered somewhat by a narrative that tries to convince us tragedy will strike at any moment. This was a similar fault in the 2021 documentary The Rescue, which was directed by the Oscar-winning pair behind Free Solo, Jimmy Chin and Elizabeth Chai Vasarhelyi. Much like The Rescue, Howard and his crew have spent a lot of time and attention on stunningly recreating the rescues of these boys, and it looks fantastic.

But in the process it has lost something in the characters and the sheer scope of the undertaking. It’s missing something that evokes the magic of the movies. I found myself wanting something that dived a bit deeper (pardon the pun) beyond what we had already seen on the news.

It should be commended that the film does not over-inflate the circumstances that brought each of these people to a perilous cave rescue in Thailand, true – they were reluctant heroes without any of the pomp and circumstance that Hollywood typically trades in. But given Howard himself made such effective drama out of Apollo 13, another true story we all already knew the outcome of, it is disappointing. Maybe they thought the dramatics of the story were enough.

Where Howard really succeeds is in how well he has managed to recreate this labyrinthine cave setting, and the ways he avoided those perilous white saviour narratives that too often inflicted generations of filmmaking. With many Thai people involved from technical hyrdro experts to local farmers sacrificing their crops to divert water from flowing into the caves, and a Thai rescuer losing his life, Thirteen Lives thankfully gives as much reverence and attention to them as he does the international names.

This more modern sensibility is also found in letting the Thai cast speak mostly in their own language, and offering modest moments emphasising the country’s proud culture, which are all appreciated.

Thirteen Lives isn’t one of Ron Howard’s best movies, but it is an encouraging return to more adult storytelling from him. His experience making the movie has clearly been a positive one, as his Imagine Entertainment banner has chosen to expand its impact accelerator program to Australia. Hopefully next time, if he’s going to continue working in the streaming realm, he gets out of second gear and really makes audiences sit up from their couch.