Director and cinematographer Warwick Thornton is open in his embrace of the darkside.
Sarah Ward
[This is archived content and may not display in the originally intended format.] 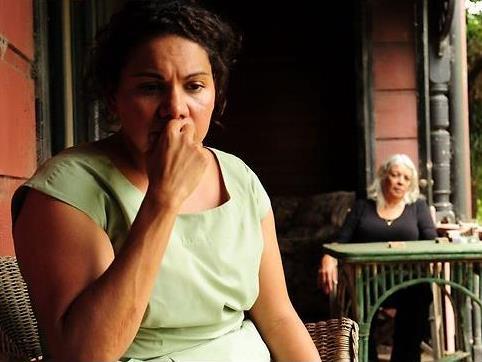 Unveiling his first film since 2009’s Cannes Film Festival Camera d’Or-winning Samson and Delilah, a work which paved the way for bigger and better things, director and cinematographer Warwick Thornton is open in his embrace of the darkside. In an offering that uses the term as its title, his meaning is multifaceted. Ignoring the expectations of his accolade-laden status, the filmmaker not only delves into the spooky and sinister of spoken ghost stories, but explores the spirituality inherent in Aboriginal culture

Thornton has been far from idle in the years since his debut feature elicited effusive admiration for its potent portrait of Indigenous youth, behind the lens efforts on Here I Am and The Sapphires, and a short section in Tim Winton’s The Turning ranging among his output. His directorial return further demonstrates his enterprising ways in the interim, taking the form of a documentary depiction of tales tallied from a national callout. Eschewing his own voice for those of others for the first time in his career, he synthesizes 13 takes on the supernatural into one ethereal big-screen experience.

With no semblance of a one-size-fits-all approach in sight, the film varies in means, mode and mood between segments – some related by their original narrators, detached voices and montaged vision combining to striking effect; others enlivened by actors in the guise of storytellers, shot in settings designed to enhance their naturalistic performances. Chills are elicited in evocations of unseen entities, comedy is evident in re-tellings that corner the balance between irreverent and unnerving, and calm emanates from confident recollections of the sad but sweet. Song, dance and extreme stylisation provides pertinent interludes between and within pieces.

Each story worms its own way into the viewer’s consciousness, unassuming and involving in their separate content but similar context; and yet, as with any anthology effort, some prove stronger than others. The best are varied, but vast in scope. The confident tones of academic Romaine Moreton, expounding upon an unanticipated link between the National Film and Sound Archive and the Australian Institute of Anatomy, capture attention. The expressive dancing of Claudia Karvan (Daybreakers) affords a connection not always present in her telling of a tale. The innate charisma of Aaron Pederson (Mystery Road) adds an extra layer to a tale steeped in race relations.

Where The Darkside proves less rewarding is in the balance between the individual and the collective, the film striving to succeed as a cumulative offering, but saying little more than the expected when its pieces add up to the whole. Thankfully, the ever-lavish lensing of Thornton’s keen eye ensures that even when the feature’s ambitious execution wavers, the outcome always remains a visual treat. The Darkside, it seems, is filled with potential – some realised, some unable to come to fruition, all mirroring the minutiae of its concept.