Ken Loach’s latest film is a warm-hearted comedy about a young father-to-be who dreams up a unique way to escape his dead-end life.
Sarah Ward
[This is archived content and may not display in the originally intended format.] 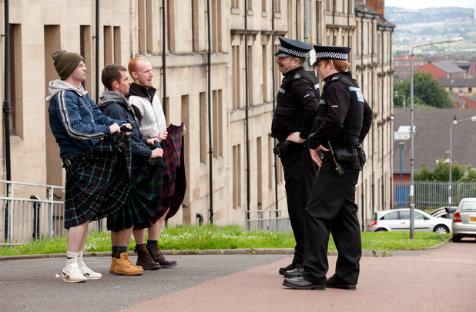 The Angels’ Share possesses all the necessary ingredients for a serious social realist drama: it is directed by British filmmaker Ken Loach, and features more than a respectable amount of whisky. That the Cannes Film Festival Jury Prize-winner instead proves one of the auteur’s warmest comedies consequently comes as something of a surprise.

Loach’s latest crop of misfit protagonists bond whilst undertaking community service for various unruly behaviours. Perhaps the most troubled is Robbie (Paul Brannigan, in his first film role), a young father-to-be caught in a cycle of inherited hate and violence, yet desperate to break free for the sake of his girlfriend (Siobhan Reilly, Book of Blood) and unborn child. His path to a normal life comes in the form of hard liquor and his unexpected talent for appreciating the finest Scottish brews. A trip to a distillery inspires an unlikely plan of escape, which will utilise all Robbie’s talents – both old and new.

There’s a sense of familiarity to Loach’s central concept in this, his 25th film, but that’s not to say that he is reliant upon formula. Though Robbie seeks solace in a new set of skills in the same fashion as the child hero of Loach’s seminal 1969 effort, Kes, the director is careful in his emphasis of their commonality. Similarly, the discovery of the immense contrast between Robbie’s current troubled home life, and the future potential that whiskey and a windfall could bring may be a recurrent thematic refrain in Loach’s works, however The Angels’ Share adopts a softer tone.

Such parallels – subtly handled yet seething with social commentary – enhance rather than overshadow what turns out to be a defiant, delightful story. As second chances, new beginnings and acts of redemption inform the script from screenwriter and long-time collaborator Paul Laverty (Even the Rain), the film evolves to become a lighter Loach offering, complete with comedic sequences and a picturesque hillside locale.

In another staple move, largely inexperienced actors star to winning effect. Understated at all times, and infused with optimism, Brannigan and his co-stars (The Wind That Shakes the Barley’s William Ruange; Sweet Sixteen’s Gary Maitland and newcomer Jasmine Riggins as Robbie’s partners in crime; and Looking for Eric’s John Henshaw as their kindly guide into the world of whiskey) are authentic in their camaraderie and the sincerity that they inspire.

Accordingly, The Angels’ Share proves a fitting and charming addition to the director’s oeuvre. Engaging and amusing, the end product may embrace its feel-good leanings, but does so with Loach’s trademark social conscience.