The Netflix hit delivers a fourth time on its core promise: nothing will change very much, even as the cast visibly approach their 20s.
Naja Later 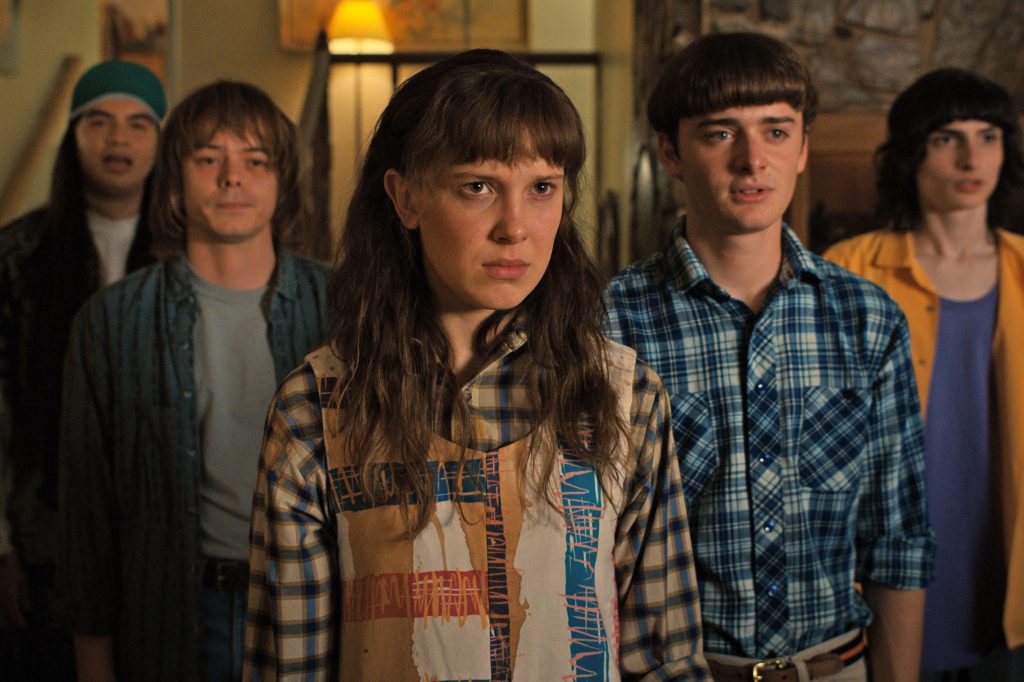 A lot can happen in nine months, evidently. Image: Netflix.

(Viewers should note that the first episode begins with a flashback to children being killed in a supernatural education facility.)

Steven Spielberg is a master of suspense. Whether his underdog heroes are facing great white sharks, Nazis, or a faceless trucker, his stories never fail to thrill. It’s a simple strategy, executed by a master: the odds of the hero’s success must be nearly impossible.

Stranger Things borrows liberally from Spielberg, among other 80s greats. You’ll never miss a reference, because the characters helpfully name their citations. The only problem? In Stranger Things, the odds are decidedly surmountable.

In season three, a character lamented: ‘I don’t want things to change.’ This is the central anxiety of the show, and a real problem as the leading cast of tween characters visibly approach their 20s. The show is a snow-globe of 1980s nostalgia, captured at a perfect standstill under the glass of your television. All that moves is the gentle flicker of cathode-ray tube snow. Only nine months have passed in Hawkins, and though the characters have physically grown, the show never challenges them to change emotionally.

Satanic panic has gripped Hawkins, Indiana. The Dungeons and Dragons campaigns that first brought our heroes together in 1984 (our 2016) have finally started to worry the parents of America. In this case, their fear is not unfounded: every monster from the alternate dimension beneath Hawkins has taken on the shape (and helpfully, the weaknesses) of D&D monsters. The demogorgons and mindflayer defeated, Hawkins now faces a new foe.

Stranger Things delivers a fourth time on the core promise: nothing will change very much, and this rose-tinted fantasy of the 1980s won’t challenge your modern sensibilities. The deeper horrors of Reagan politics, the Vietnam war (finally acknowledged, briefly), and the AIDS crisis have faded into static.

The show evokes the distinct sense-memory of a cardboard VHS sleeve, crinkled and soft at the edges. The gruesome monstrosity of the era’s video nasties easily defeated by a synth-driven pop song. It’s not the 80s as they were, lived and suffered in full colour: it’s a shirt you’ve washed a hundred times since then, pilling and thin. A delight for the sensorium, as ever.

Though the horrors never threaten our darling protagonists too terribly, no expense is spared on the tentacled beasties or visceral deaths of side characters. Borrowing more from the grotesquery of The Exorcist and Evil Dead than the milder Spielbergian horror of early seasons, there’s no shortage of gnarly set pieces.

But we know our plucky favourites will probably figure out the answer at the tenth hour, scribbled in crayon and collaged together. The evened odds shift the tone from horror to a spooky superhero vibe. Schlocky soundbites about saving the world are delivered with the gusto of an Avengers trailer, a desperate effort to maintain any sense of pacing or tension when the so-far seven episodes run over 80 minutes.

The show is grown-up enough now that it can recursively namecheck itself, a perfectly closed loop of nostalgia. El, played more than capably by Millie Bobbie Brown, must relive her traumatic training to regain her supernatural abilities. Steve (Joe Keery) is still the babysitter, but he and Nancy (Natalia Dyer) might get back together.

Will (Noah Schnapp) cannot reintegrate from the periphery of the group, and Dustin (Gaten Matarazzo) remains a stalwart of charming gumption. Lucas (Caleb McLaughlin) sees a little growth now he’s joined popular crowd, but of course change is the enemy: his arc draws him back into the fold.

The writers seem uncertain of what to do with Mike’s (Finn Wolfhard) bombastic presence, annexing him to keep the plot stalled. Max (Sadie Sink) is the only character to gain depth: devastated by the death of her stepbrother, she’s struggling to get back to normal.

Of all the characters Robin (Maya Hawke) seems best-positioned to take on some more serious challenges, if the show throws any her way. Hopper (David Harbour – of course he wouldn’t die!) and Joyce (Winona Ryder) and are embroiled in a wacky Russian intrigue that would put 007 to shame. The whole thing is as saccharine and bloody as corn syrup, best paired with a cheeky reference to Eggo waffles.

The world is terrible: why not indulge in a little nostalgia? There’s no apparent irony in the fact that Reagan’s America set in motion the healthcare crisis, environmental disaster, and endless wartime that we’re desperate to escape from. Facing an eldritch horror that feeds on trauma, the seething embodiment of the death and cruelty that lurk beneath the surface of small-town America?

Nothing a few references to Spielberg from a ragtag group of overdeveloped kids can’t fix.