Review: Midsommar is as gory as it is uplifting

Originally billed as a slasher, the result is an unexpectedly joyful reflection on communal experience.
Mel Campbell
[This is archived content and may not display in the originally intended format.] 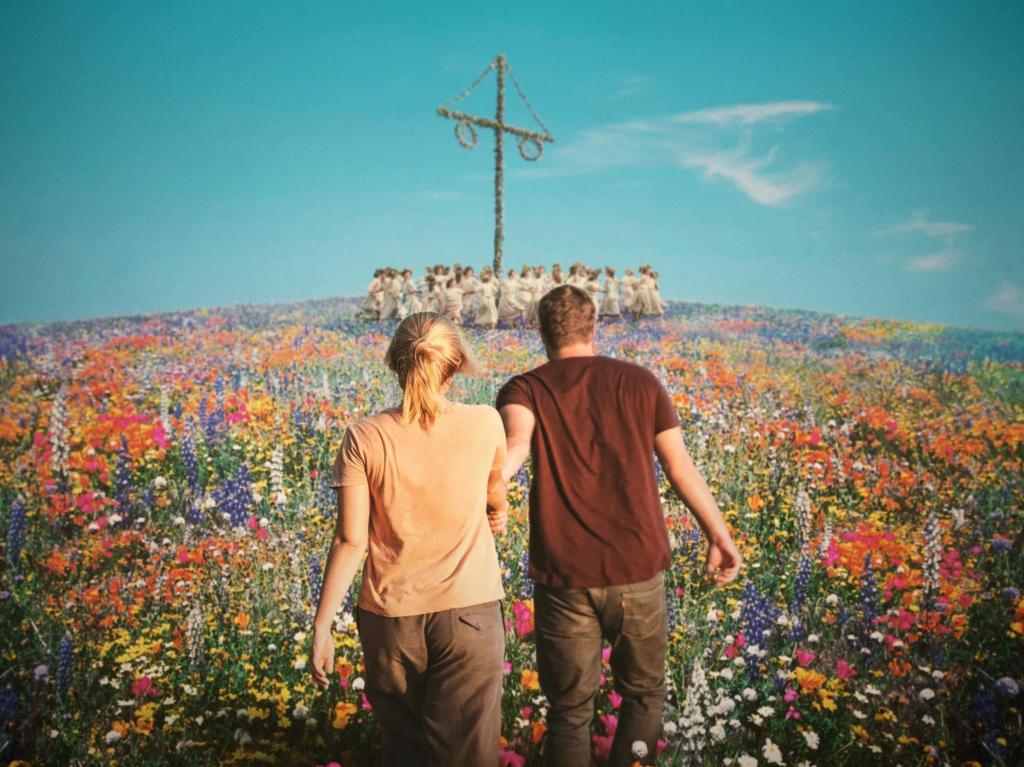 Image courtesy of A24 Films.

Ari Aster’s first feature, last year’s Hereditary, left me feeling deeply unsettled. Hereditary explored acrimonious parent-child relationships and contained many genuinely upsetting moments. However, despite the way Aster’s follow-up, Midsommar, is being talked about as an ‘extreme’, disturbing cinemagoing experience, I found it joyful and uplifting.

Those of tender sensibilities should of course be warned that the film does earn its R-rating with some high impact injury detail that filled a packed cinema with horrified groans. But this is also a very stylised film, full of painterly compositions, long takes and fluid camera movements that showcase its careful, elaborate production and costume design.

Aster’s relish for ritual turns Midsommar into a film about play and pleasure. It has the general feel of folk horror, but doesn’t sincerely engage with the malign, atavistic pull of landscape in the way genuine folk-horror films do. Its horror comes not from dread or jump-scares but from the abandonment of the self to the embrace of community.

Psychology graduate student Dani (Florence Pugh) and her emotionally unavailable boyfriend Christian (Jack Reynor) are on the verge of breaking up when Dani suffers a terrible bereavement. Reluctantly but guiltily, Christian invites Dani along on a long-planned summer holiday with his fellow anthropology PhD students, Josh (William Jackson Harper), Mark (Will Poulter) and Pelle (Vilhelm Blomgren), to the secluded Swedish village where Pelle grew up.

Once every 90 years this community, known as the Hårga, celebrates a very special midsummer festival, and the driven, nerdy Josh – whose PhD is about European midsummer rituals – is keen for some participant-observation. Laid-back Pelle is looking forward to reuniting with his family, while fratty Mark is fervently planning to pick up Swedish babes, and resents Dani’s miserable, cockblocking presence.

Midsommar isn’t a film whose climax is unexpected; you can pretty much guess where it’s heading. None of the Americans get what they anticipate, but they all get what they deserve.

The film is most beguiling when it blurs the boundaries of perception in the subtly unsettling way of a deepfake: the floral crown Dani wears that seems to ‘breathe’; the creepy figure she glimpses in a mirror; her nightmares that leak into wakefulness; the rapture she experiences while participating in a maypole dance marathon, stoned on ‘special’ herbal tea, slipping unexpectedly into being able to speak Swedish.

Aster is still getting away with his directorial pet motifs, but they’re becoming more obvious. Like Wes Anderson, he likes geometry, symmetry and whimsical handcrafts. His depiction of disabled characters as mystics is… awkward. And he treats moments of body horror and emotional torment with detached, placid observation. This tactic of deliberate dissonance was wrenching in Hereditary – particularly because of Toni Collette’s utterly committed performance – and is still striking here, because Pugh makes Dani seem so raw and frayed. But the more Aster depends on it, the less effective it’ll be.

Most oddly, Aster is interested in vocal tics. Hereditary was full of tongue-clicks; Midsommar features a sharp, quick inhale-and-puff breath that seems to signal readiness and resolution. And in two pivotal scenes – a ritual sex scene that’s simultaneously disturbing, moving and hilarious; and one in which the young village women comfort a sobbing Dani – a group of people echo the central character’s moans in chorus, as if to carry their feelings and sensations, forming a kind of vicarious gestalt organism.

‘I have always felt held. By a family… a real family,’ Pelle tells Dani. ‘Do you feel held?’ This is a film about holding – and letting go. I enjoyed the particular technique Hårga people use to hug each other hello, and the silent pageantry of their communal meals at long tables arranged on runic angles. Their way of life is predicated on the turning of the seasons: everyone has a rich, secure place, but just as the sun eventually sets, everyone will be replaced. Midsommar insists – elaborately, fetishistically – that celebrating life requires also embracing death.

What dooms the Anglo-American visitors is their atomisation: they act only according to their own values, in their own interests. But among the Hårga, the community prevails over the self. The surrender of individual sovereignty is not treated as dystopian or repressive – as in, say, The Handmaid’s Tale – but as a neutral fact, or even a freedom from the agony of subjectivity.

The same week I saw Midsommar, I saw Fast & Furious: Hobbs and Shaw, a film about two blustering alpha males who both can’t bear to lose face. I imagined Vin Diesel sitting next to me in the cinema, urgently whispering ‘FAMILY’ every time the characters expressed any mild human connection. That screening was filled with the boisterous gabbling of male audience members enjoying themselves vastly.
By contrast, as I left my screening of Midsommar I passed little groups of stunned-looking young men, not unlike Christian and his mates, standing quietly around the foyer as if contemplating their narrow escape a blood eagle. I felt euphoric.