Review: Island of the Hungry Ghosts

This poetic Australian documentary takes its own astonishing, heartbreaking path through the global refugee crisis.
Sarah Ward
[This is archived content and may not display in the originally intended format.] 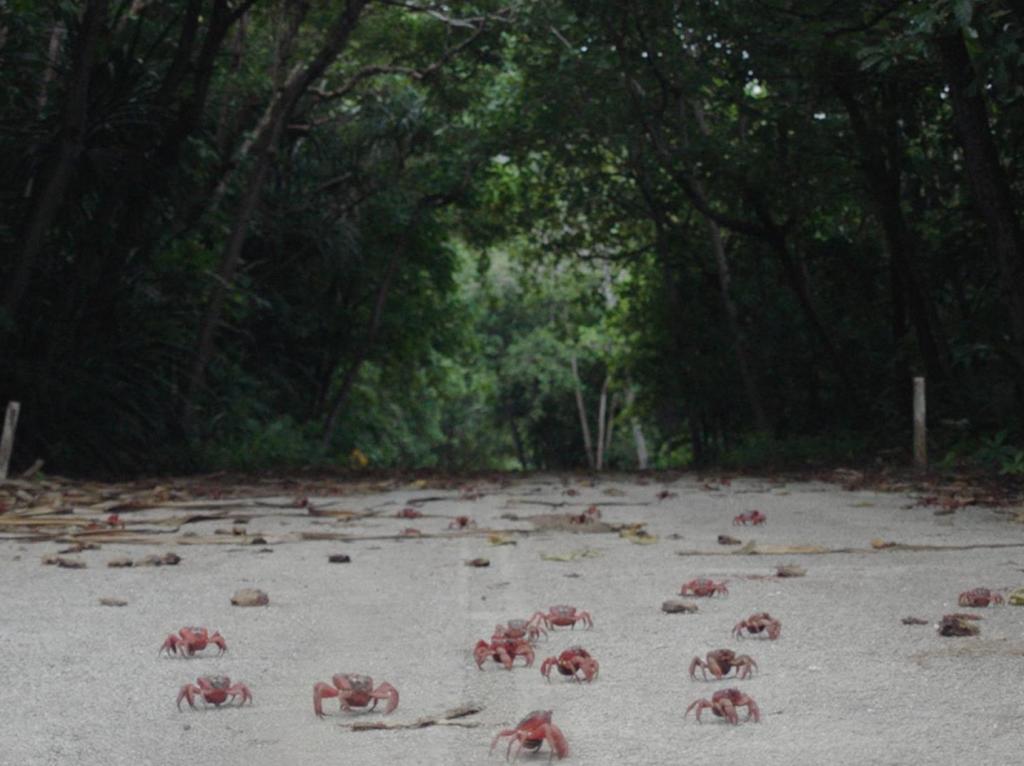 On Christmas Island northwest of the Australian mainland, roads close during red crab migration season. Two staff dedicate their working hours to ensuring the scuttling creatures’ safety, gently sweeping them out of the path of vehicles or updating the permanent signage that announces whether the critters’ long walk has closed nearby streets. They’re not the only island inhabitants cognisant of the crabs’ plight, with locals carrying rakes in their cars to help move them out of harm’s way if needed. There’s no discussion or complaints about it, or debates about whether it’s the right thing to do — or about whether the crabs belong there. Instead, one species simply helps another complete its journey.

If only the same care and respect was given to Christmas Island’s other transitory population, Island of the Hungry Ghosts posits — a population that mightn’t number 40 million as the crabs do, but is similarly just trying to get from one place to another. That refugees don’t receive the same considerate treatment is this hybrid documentary’s point, and one that it makes in a thoughtful, compassionate, quiet and still resounding fashion. Here, shots of scurrying crustaceans walking en masse across bitumen, grass and rock sit in stark contrast to the close-ups of the anguished asylum seekers’ faces counselled by trauma therapist Poh Lin. It’s a juxtaposition that the film doesn’t explicitly call out, as it doesn’t need to; it lingers in the air regardless, highlighting both the cruelty and the irony of the situation.

Indeed, making her first feature and expanding upon her 2017 short The Island, writer/director Gabrielle Brady never makes the obvious comparison. The sight of the trudging masses so often seen in other refugee-focused documentaries — as particularly potently captured in Ai Weiwei’s Human Flow, for example — is wholly absent. Instead, Brady lets the audience make that leap for themselves, and focuses the film’s human moments not on the journeys that refugees seeking asylum in Australia take, but on the fact that they can’t. Detained in a prison-like compound secreted away in the jungle, their lives are glimpsed through their time with Po Lin — where they play with a therapeutic sandbox and unburden their heartbreaking stories — as well as the time that Po Lin spends trying to ascertain their whereabouts when they don’t attend their appointments.

In between, the kindly Po Lin grapples with her role in the system, explores her adopted home with her husband and two young daughters, and witnesses the ceremonies that give the feature its title: rituals to farewell the spirits of those who died on the island but didn’t receive a proper burial. Brady combines the film’s various components with a sense of poetry, both observing commonalities between Christmas Island’s three migratory populations, and expressing the feeling they evoke in an internalised yet expressive fashion. With Michael Latham behind the lens, the feature’s cinematography favours the clear-eyed yet dreamlike — a sensation his work in Strange Colours and Casting Jon Benet also inspired. Patient editing assists, amplifying the pervasively languid air, as though the camera is taking viewers on an ethereal but lucid wander across its setting, past its human, animal, living, dead, free and trapped inhabitants, and through a plethora of contradictions.

Accordingly, in style as well as in substance, Island of the Hungry Ghosts weaves its threads together in an astute, empathetic and impassioned manner, all while remaining cognisant that nothing within the film exists in a vacuum. That’s true of not only its tales of crabs, refugees, spirits and one particular woman and her family, but in the manner of telling their stories. Specifically, rarely has the use of scripting in a documentary — with non-actors deployed in scenes they’ve helped write — felt so essential to its message, or so powerful in helping a feature relay its position. It’s emblematic of an approach that endeavours to interrogate complex circumstances, the history behind them and the primal emotions sparked by in turn, which is not only Brady’s ultimate act in making this lyrical movie; it’s what Po Lin, her family, colleagues and clients all do within the film’s frames.