Billed as America's most controversial film, the Blumhouse social thriller spreads its bile on an equal opportunity basis.
Adrian Martin 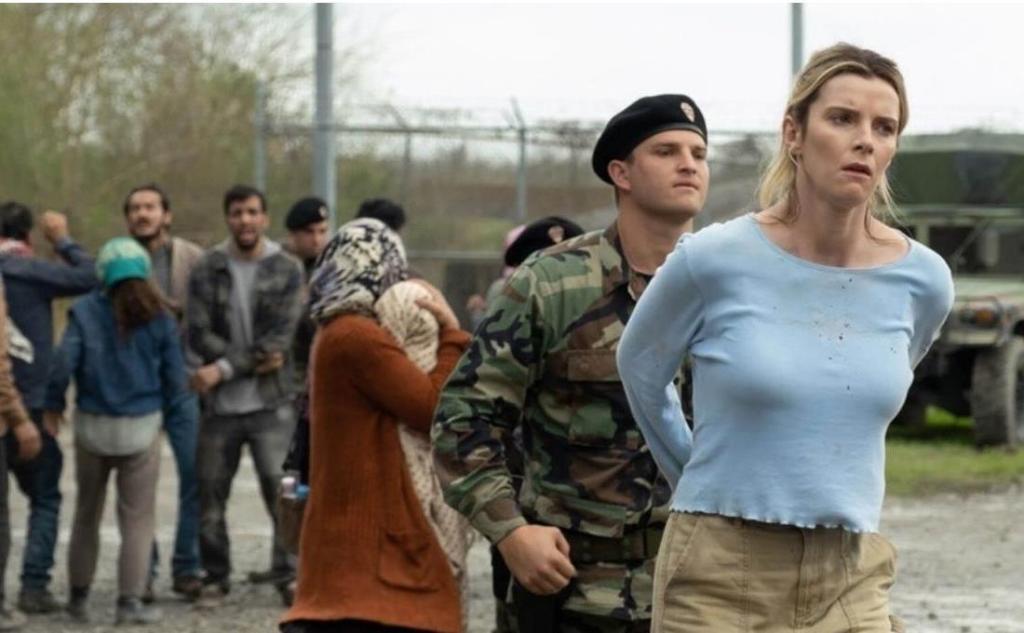 Betty Gilpin emits a tough proletarian allure in The Hunt. Image via UPI.

Around about the mid 1980s, mainstream movies, especially in America, introduced a fascinating, new wrinkle to the usual commercial formulas. Instead of clearly ‘taking a side’ on whatever hot topic a movie handled, a great deal of effort was expended on taking no side – or, rather, trying to flatter viewers on every side of the fence. Ambiguity – not necessarily of the most artful sort – then washed into popular cinema at all levels. However you wished to interpret some controversial ‘event movie’, you could be sure that the filmmakers had planted some references, some clues, some evidence to back up your view of the issue, whether that view be left or right, conservative or progressive, anarchistic or nostalgic.

It wasn’t that way in the American films of the 1970s – at least, not the kind we today celebrate, by Robert Altman, Elaine May, Francis Ford Coppola or Monte Hellman. Audiences did not walk out of The Long Goodbye (1973) heatedly arguing over whether Elliot Gould’s incarnation of Raymond Chandler’s legendary detective Philip Marlowe was to be taken as depicting a hero or an anti-hero. That’s because Altman’s satirical viewpoint on this character, as a hopeless relic from another time, was perfectly clear and pointedly expressed through his direction (not to mention his press interviews).

The ‘70s exception that proves this rule is Martin Scorsese’s Taxi Driver (1976). That is a film which makes us legitimately wonder whether the notorious Travis Bickle (Robert De Niro) is intended as a heroic ‘man of the people’ in a dirty world, or just a rampaging, alienated psychopath. Little surprise, then, that it’s Taxi Driver which wields such a decisive influence, today, over an ‘event film’ such as Todd Phillips’ Joker (2019) – a movie that truly tries to have it every which way (the Joker as victim, killer, visionary, dysfunctional … ).

The Hunt is the latest American event movie. It picked up some controversy before even being released, because of the ‘sensitivity’ issues triggered by its timing: should we be enjoying a horror-comedy about killing at a time of real-world mass shootings? And the promotion gamely attempted to capitalise on this frisson of ‘incorrectness’ and ‘inappropriateness’. In truth, there’s no real peak moment – good or bad – for the release of a film like this. It plays how it plays – ringing bells, inciting provocations – regardless of its exact timing.

It all begins with a text-message whip-around between a bunch of as yet faceless people; their jokey, New Age banter swiftly escalates from the inane to the sinister as they drop references to ‘the hunt’, ‘The Manor’ and ‘slaughtering a dozen deplorables’. All throughout this opening, stately classical music plays on the soundtrack – a hint, alongside references to billionaire philanthropists, that we are in the realm of the hyper-cultured elite, the notorious ‘one per cent’. The woman we see (only from the back) involved in this charming exchange is Athena ­– whom we’ll properly learn, in a flashback an hour later, is played by Hilary Swank.

The second scene takes proceedings up another notch. On a privately chartered plane in mid-flight, an obnoxious chap, Richard (Glenn Howerton), treats the flight attendant (Hannah Aline) abominably, flaunting his ‘superior’ position. Then a confused, wild man lurches into the compartment ­– and must be violently put down. The ‘game’ of class war, clearly, is on.

Then we relocate to a new mysterious setting – the film specialises in these kinds of leaps and jolts from sequence to sequence. Eleven seemingly ordinary Americans, with no connection to each other, wake up in a field. There’s an odd-looking box containing weapons – and a live pig. We are at the beginning of yet another variation on the sturdy ‘humans hunting fellow humans’ model provided by The Most Dangerous Game aka The Hounds of Zaroff, a story written by Richard Connell in 1924 and providing the spur for everything from Arnold Schwarzenegger in The Running Man (1987) to the Reality TV satire Series 7: The Contenders (2001) – with plenty of outdoorsy, Z-grade action flicks in-between.

OK, we seem to be watching a fairly straightforward, if melodramatically exaggerated and even ham-fisted, satire of the privileged class here, right? Wrong. Or rather: not entirely wrong, and not entirely right, either. Because, as scripted by Damon Lindelof (Lost) and Nick Cuse, and produced by Blumhouse (the source of several successful horror-thriller franchises of the past decade), The Hunt spreads its bile around on an equal-opportunity basis.

On one side: the upper class, pretentious, painfully ‘woke’, lacking all basic human compassion. On the other side: the working class, stoked by resentment and paranoia, prone to racism and sexism. And not only that: these disgruntled citizens know how to work the Internet to their advantage, creating websites and embarking on cyber-investigations fuelled by  irrational fantasias on conspiracy theories and ‘crisis actors’.

The ‘one per cent’ may be an ingenious cabal of killers with infinitely deep pockets, but the representative average folks are (or try to be) hardy survivalists. The one mediating figure between these starkly opposed camps is, amusingly enough, an ex-National Guard, Dale (Steve Mokate), who claims to have worked as a trainer on the 2003 Bruce Willis war movie Tears of the Sun!

Without giving away too much of the plot (it has its tasty surprises), it becomes pretty clear from Crystal’s first gung-ho appearance at a gas station that she and Athena are on a collision course to an ultimate, Kill Bill-style showdown – one of many nods the film makes to Lord Tarantino.

The casting is intriguing. Swank, the closest thing to a ‘star’ in this show, stands for the immaculate ‘showbiz liberal’ in American terms, frequently associated with politically ‘progressive’ projects. She’s brave to take on this part. Betty Gilpin, on the other hand, is tied to GLOW, the fine Netflix series about female wrestlers, where she exudes a tough, no-nonsense, proletarian allure. I predict that, after The Hunt, she will be typecast this way for some time to come.

Director Craig Zobel – whose Compliance (2012) was a less tricksy take on hot social topics – revels in all the ambiguities carefully, even opportunistically woven into this material. It’s the type of story in which no one may be who they at first seem to be, and no stated motivation can be wholly trusted. By the time we reach a gaggle of Eastern European refugees – I won’t tell you how the film manoeuvres its way over to that one – we are deep into treacherous, duplicitous appearances and deliberately outlandish switcheroos. On this level, The Hunt reminded me of something on the order of 10 Cloverfield Lane (2016), which seemed to reboot itself as a new movie in a different genre every 10 or 15 minutes. Again, this is a Blumhouse speciality, evident also in the recent work made for that company by M. Night Shayamalan.

This brings us to the horror aspect of the project – and, more specifically, its horrific comedy angle. Not since the most cartoonish 1980s days of Sam Raimi, Peter Jackson or the Coen brothers have we seen so many heads exploded, crushed or shot clean through! Virtually all of the violent action in the piece takes this deliberately artificial route. The effect is paradoxical: one the one hand, such artifice increases the ‘gross out’ factor, heightening the general air of ‘incorrect’ outrageousness; on the other hand, it removes the scenario from all earthly reality, despite all the studious references to current affairs and pop culture fads.

That’s why I say there is, ultimately, no absolutely right or wrong time to release The Hunt. It’s a film that cheekily preys on contemporary anxieties and anti-social fantasies on every side of the political border; while, at the same time, giving itself the get-out-of-jail-free card of silliness and (icky) poetic license. Just entertainment? It is, and it isn’t – and that’s the game which blockbuster movies have been playing with us, and on us, since the 1980s.