Film Review: The Tunnel – The Other Side of Darkness 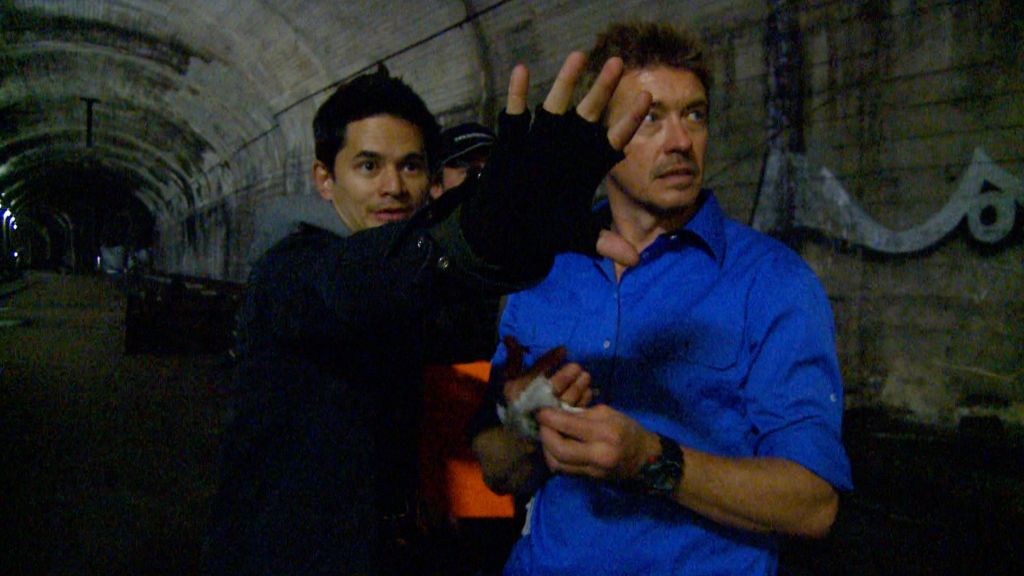 The Tunnel is not a movie you’ll have heard about recently. Released in 2011 and directed by Carlo Ledesma, it was an Australian-made horror movie without Screen Australia funding. It came towards the tail-end of the found footage craze that had well and truly worn out its box office cred around the sixth Paranormal Activity movie a few years later. The Tunnel was also released exclusively through torrent websites, which is maybe something you do remember.

One other thing about The Tunnel is that it’s really good!

Alongside The Babadook and similar mock-documentary Lake Mungo, The Tunnel one of the strongest locally-produced horror flicks of the decade. It’s a rock-solid, gnarly subterranean thriller about a television crew doing a news story about missing people in Sydney’s abandoned subway tunnels, when they make a horrific discovery. Told through hand-held camera, it remains one of the better examples of the sub-genre, riffing on the likes of [.REC] with a propulsive energy. Fittingly, the team behind the film won the Breakthrough Independent Producer of the Year award from the Screen Producers Australia Awards.

Ten years later, indie multi-hyphenate Adrian Nugent has directed The Tunnel: The Other Side of Darkness, which casts a much-needed spotlight on The Tunnel. Taking a behind-the-scenes look at this anomalous film, Nugent glides from inception to production and release with prominent detours through the murky worlds of crowdfunding and torrent piracy. There’s even an asbestos scare.

Alongside Ledesma, co-writers and co-producers Enzo Tedeschi (recognisable by his Tom Savini beard) and Julian Harvey feature heavily as do cast-members Bel Deliá, Andy Rodoreda, Steve Davis and Luke Arnold, as well as Transmission Films’ Andrew Mackie and filmmakers like Kiah Roache-Turner. Nugent’s film is thorough, featuring extensive use of behind-the-scenes video, production room material and film clips all set to a spooky, omnipresent score by Paul William Dawkins. Many years after the fact, it’s nice to see appreciation of things like the intricate art of horror make-up, innovative marketing campaigns, as well as hear stories like the one about how Prime Minister Julia Gillard became an accidental part of production.

What gives The Other Side of Darkness a sense of specialness—and no doubt helped it get picked up by Monster Fest for its world premiere—is that the Australian film industry has such a fickle relationship with horror.

Making-of specials aren’t rare. Specialty home entertainment releases often come with them, if not necessarily feature length documentaries, as is the case here. What gives The Other Side of Darkness a sense of specialness—and no doubt helped it get picked up by Monster Fest for its world premiere—is that the Australian film industry has such a fickle relationship with horror. Local movies rarely engender the sort of grass roots enthusiasm as The Tunnel to warrant such a production as this. Even rarer still, a horror movie with no government funding whatsoever, no big stars and with zero streaming footprint.

But then, the story of The Tunnel is far more interesting than most. It was primarily funded by users who purchased frames for $1—full disclosure, I did buy some, although I appear to have lost them after a decade of digital evolution. Before big properties like Veronica Mars used this people power method to fund fan-focused projects, it meant they were not seeking to recoup debts and allowed for the decision to release for free via peer-to-peer networks. The filmmakers claim it has been seen by 25 million people as a result, which probably can’t be said for too many Aussie features. Of course, this came with its own setbacks.

Nugent’s subjects make the not-too-farfetched suggestion that The Tunnel was essentially black-listed for its insistence on a mass-release via platforms like BitTorrent. So much so where even the eventual DVD release was not stocked by retailers because they were perceived to be supporting piracy. It remains completely unavailable across the suite of locally available streaming services to this day (but can still be downloaded via torrents if your ISP allows access) and can be purchased through the production company.

I would have been very interested in digging even deeper here. The word ‘disruptor’ is used a lot and references to North American low-budget independent successes like El Mariachi, Clerks and (the grand-daddy of found footage horrors) The Blair Witch Project highlight how different the Australian industry is to those who think outside of the acceptable bounds of what can or cannot be done. Blair Witch co-director Eduardo Sánchez is a featured interview in the doc and a look at his post-breakthrough career success shows a marked difference with The Tunnel’s Carlo Ledesma. Exploring exactly why that is may have taken The Other Side of Darkness into darker territory, but it would have been worth investigating as one of the lingering mysteries of The Tunnel’s long legacy.

It’s true that local genre triumphs such as Wolf Creek and The Babadook have been celebrated (perhaps cynically as a response to their international success) while many more have been disregarded no matter how critically acclaimed. If The Tunnel: The Other Side of Darkness can lead to a resurgence in appreciation for Ledesma’s film, then that would be a big win. If it doesn’t, then this documentary remains a fitting appreciation of The Tunnel’s historic place in Australian film history.