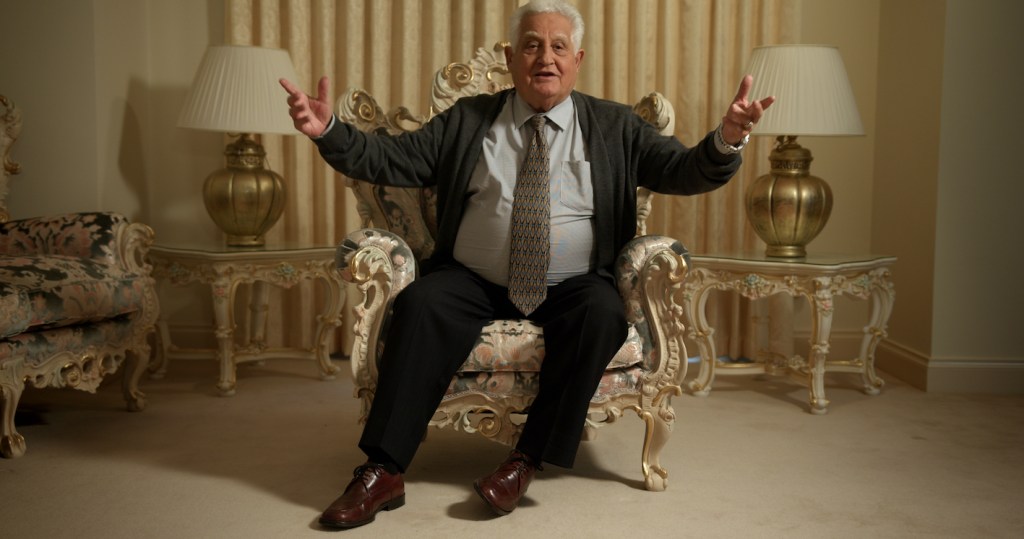 Say the words ‘grand sale’ to anybody who lived in Melbourne for the better part of the 1980s and 1990s, and you will inevitably see eyes light up like Christmas trees in remembrance of television staple Franco Cozzo. The popular, singular business entrepreneur with his low-budget TV commercials advertising baroque furniture across three locations (Footscray, North Melbourne and Brunswick, as if you could forget) were a Melbourne institution as much as the MCG and laneway coffee spots.

While Madeleine Martiniello’s feature documentary has already come and gone in other parts of the country, the film’s release in Cozzo’s hometown of Melbourne will surely see its warmest reception. After unfortunately cancelled Melbourne Film Festival screenings, local audiences will no doubt delight in the film’s ultra-specific cultural reference points and warm-hearted nostalgia. It does a fine job of showing how this business-savvy migrant from Sicily brought Italian (and later Greek; megálo, megálo, megálo!) into everyone’s living room and in the process became not just a household name, but a veritable pop culture figure who made appearances on talk shows and comedy records.

Having migrated to Australia in 1956, Franco Cozzo quickly sussed out the best way to make a living as a door-to-door furniture salesman who didn’t speak English—target the houses with opulent front decors. As Cozzo explains, the money wasn’t with the locals who viewed even coffee with suspicion (to say nothing of ‘foreign’ languages), but in fellow Europeans. They had the desire to furnish their homes in ornate, imported lounge suites and dining tables as a nod to their ancestry and a symbol of their hard-work and rising status.

Martiniello’s film follows Franco Cozzo in the later years of his career as he continues to trawl the shop floor of his flagship Footscray store and attends family gatherings. In talking head interviews, he sits atop a (typically) spectacular over-the-top, decoratively hand-carved throne where he regales viewers with tales from his early life. Editor Rosie Jones makes fun use of archival and stock footage, effectively weaving it throughout his first-hand recollection to recreate the experience of a young Italian man trying to make it in a new city of shifting demographics.

Informative and lovingly told, these passages hold emotional resonance in much the same way as other Melbourne-based migrant-centric films like 2003 documentary Lygon Street — Si parla Italiano and the early works of Giorgio Mangiamele and Nigel Buesst.

Less successful is the treatment of thornier topics. The film quickly skirts around the issue of racism, while Franco himself quickly shuts down any talk of his son, Luigi, who was found prosecuted on drug charges in 1992. One brief moment suggests it may be about to pick apart the appropriation by anglo culture of Franco’s thick accent and English-as-a-second-language quirks. This unfortunately doesn’t last long, almost as if Martiniello doesn’t want to kill the feel-good vibe she’s clearly going for.

It makes sense then that the film has the most fun when it gets to Cozzo’s period as an unexpected screen icon. Palazzo di Cozzo expectedly gets great mileage out of his classic lo-fi commercials that welcomed all into his enormous showrooms full of on sale furniture. This section is by far the doc’s most entertaining, although it does come across a little bit too easy. Franco Cozzo was a showman, it’s true, but perhaps the movie placates a white inner-city Melburnian audience too prominently here.

In contrast, the film’s strongest feature is actually its brief detours into the homes of dedicated Cozzo shoppers. Shot by cinematographer Vincent Lamberti with elegant sweeping shots that highlight the elaborate furniture in its natural habitat, we get to learn about how Cozzo’s furniture affects its owners and what it meant to first generation migrants who saved and saved to purchase for themselves an extravagant piece of home style. These inspired vignettes run from emotional to funny and offer insight into just how he has stayed in business for as long as he has. I wished for more of this.

Read: The Rescue is thrilling and inspiring

Particularly so, considering that second and third generation immigrants no longer crave the memories of a homeland they have never seen. The doc shows Cozzo’s brand of lavish furniture, often made of shimmering white or covered in gold leaf, has becoming less and less in vogue, with the film suggesting more people enter his store to meet him than to purchase a plush leather sofa or gaudy bedroom set.

Without the dedication to explore the gentrification of Melbourne’s inner suburbs, too much of Palazzo’s final act is dedicated to the will-he-or-won’t-he choice of selling. While it is amusing to watch the man pickle himself with cologne every morning, a series of meetings with property developers plays as an unsatisfying climax to the Franco Cozzo story. Especially compared with the fascinating tales that have come before it. Tales that get at the heart of the so-called lucky country. This is an entertaining documentary that Victorian audiences in particular will likely relish, but it’s got a soft touch and I wish it had dug a little deeper.