It's not breaking ground but this NZ crime caper comedy has charm and energy, and Rebecca Gibney as a great villain.
Anthony Morris 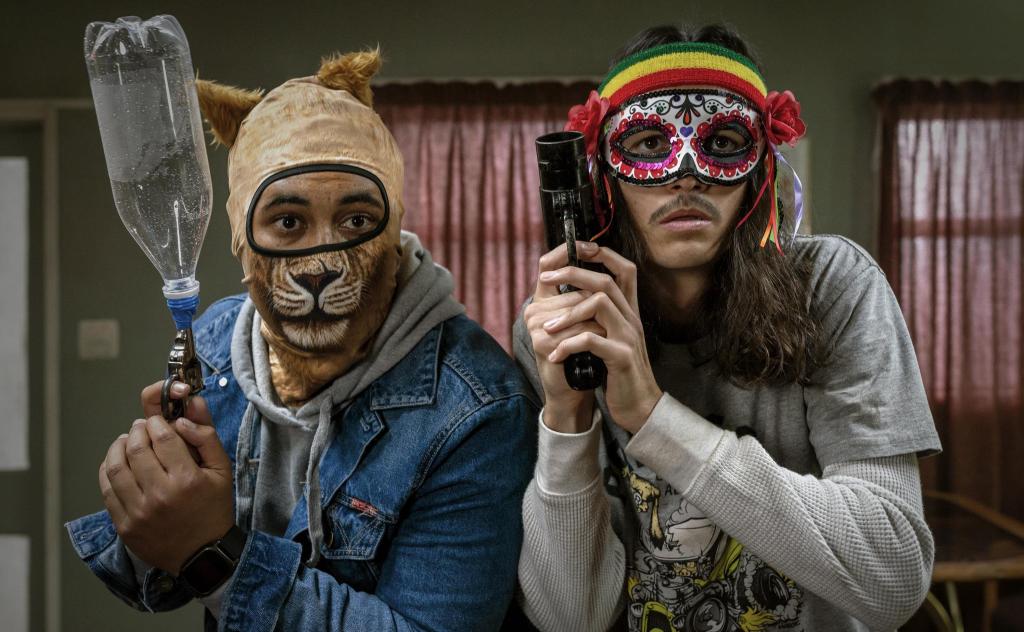 Guy Ritchie didn’t invent the wacky crime caper film, but with Lock, Stock and Two Smoking Barrels he made a mark on the genre that shows no signs of fading. His model of snappy pacing, a big cast of crime cliché characters, some memorable music cues and a high energy style have proven irresistible to filmmakers over the last few decades. With Lowdown Dirty Criminals, it’s time for New Zealand to get in on the act.

Freddy (James Rolleston, best known from Taika Waititi’s Boy) delivers pizzas for a living. Well, he used to; getting cheated out of payment then having the delivery car trashed is the kind of thing bosses don’t look kindly on. Musing with his best buddy Marvin (Samuel Austin) on his complete and utter failure to get anywhere in life despite playing by all the rules, they decide together that a life of crime is the way to go, and a job working for club owner Mr Spiggs (Scott Wills) is the way to get started.

Spiggs might be able to help them with a job but he can’t help them with their lack of smarts. When they mess up a simple errand – in the middle of picking up a birthday cake they decide to impress him with their criminal nous by breaking into an ATM – they end up owing him big time. Spiggs is not someone you want to be in debt to. He gives them a choice: kill the man who’s been sleeping with his wife, or get the kind of beating that’ll leave each of them with a limp in both legs. They choose murder, setting off a chain of mistakes and mix-ups that result in death, destruction, disembowelment and a close encounter with the scariest gangster in town, The Upholsterer (Rebecca Gibney).

Writer David Brechin-Smith knows this isn’t the time or place for deep characterisation, giving everyone a single attribute then pushing it as far as it will go for comedic effect. He also knows it’s traditional for these films to start out mid-action (in this case, a Mexican standoff where one participant is naked) before our hero offers to let us know just how he got himself into this mess and the story flashes back to the beginning. Why mess with a successful formula?

The plot moves fast enough to keep things from getting too broad, though there is a bit of a flat patch once the hijinx start to revolve entirely around ducking in and out of one hotel room. But director Paul Murphy (Second Hand Wedding, Love Birds) isn’t above throwing in a bunch of whip pans and smash cuts to keep the energy up. This is the kind of film where the occasional ‘whoosh’ sound effect can give cartoonish flair to something as minor as someone turning their head.

Rolleston has loads of natural charm, which comes in handy as his character is a bit of a screw-up, while sidekick Austin is sidelined for a lengthy stretch of the film to no ill effect. Wills gets to go big as the resident loose cannon – he even has the chance to attack a car with a chainsaw – and is clearly having fun with the character. Often these films struggle to strike the right balance with this kind of bad guy, but Wills’ performance is both threatening and just comedic enough to make it work.

Not that she’s running a huge empire or anything. We only ever see her with two henchmen – the competent Semo (Robbie Magasiva) and the somewhat erratic Roy (Cohen Holloway) – and she’s working out the back of, you guessed it, an upholsterers. Still, such is Gibney’s steely charm that she’s never less than totally convincing as a murderous ‘prominent racing identity’ (as they used to be called – it’s worth paying close attention to a racetrack photo of her on the wall), giving this freewheeling crime caper some spine even when she’s elbow deep in someone else’s extremely unpleasant guts.

This isn’t a classic by any stretch, and it’s hardly what you’d call original, but loads of energy and the occasional shootout can conceal a lot of sins. Lowdown Dirty Criminals opens with the line ‘Have you ever had one of those days where everything turns to shit?’ Turns out even the shittiest day can provide a lot of entertainment.