A beautifully shot Australian outback thriller in which a bad situation only gets worse? Yes please.
Anthony Morris 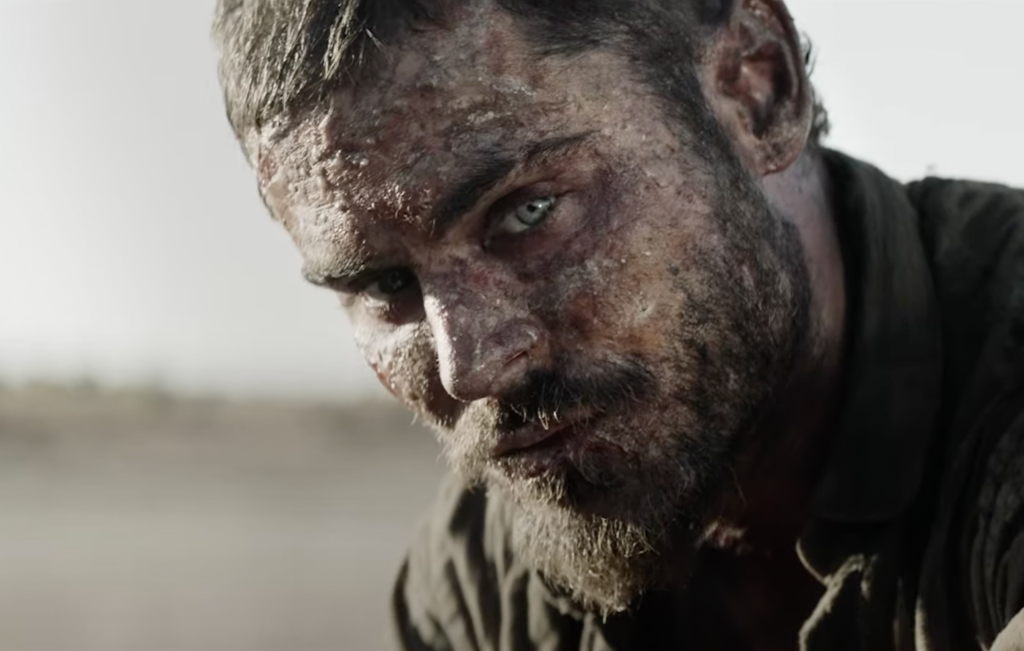 Zac Efron spends much of the time covered in mud in Gold. Image Stan.

Everyone knows gold makes people unhinged. The twist in Gold is that everyone is already unhinged.

Set in a near future where society (off camera) is busy collapsing and a barren desert wasteland is starting to look like a good option, it may very well be part of the same cinematic universe as David Michod’s 2014 post-apocalyptic thriller The Rover. Everyone we meet is struggling to survive even before they encounter a lump of gold the size of a bed.

Written (with Polly Smyth), directed by and starring Anthony Haynes, Gold is a surprisingly small-scale story for a film that looks so epic. While made for streamer Stan it’s also getting a brief cinematic release, and Ross Giardina’s cinematography deserves the biggest screen you can see it on.

Riding into a dusty no-horse town on a freight train passing through, a nameless drifter (Zac Efron) meets up with a driver (Haynes) heading out to a ‘compound’ where the drifter hopes to find work. The driver is all hard edges; the drifter is a bit of a soft touch. He’s constantly wasting water, turning on the car’s air conditioning, and generally coming across as someone who won’t survive for long in this harsh environment.

During a stop in the middle of absolutely nowhere, the drifter stumbles onto a massive nugget of gold – too big for the pair of them to dig up and carry off. One of them will have to go back to town and organise an excavator, while the other stays behind to guard their discovery. The drifter argues he should stay with the gold; the driver eventually agrees, leaving behind a satellite phone, some food, a tarp, and maybe not quite enough water.

Gold doesn’t have a lot of cards to play story-wise, but it handles them well. The relationship between the drifter and the driver is antagonistic – the driver is a hostile, greedy jerk – but not so antagonistic that it’s implausible they might work together. Who stays and who goes is a choice with no clear upside; both characters as presented are near enough to blank slates that they could legitimately turn in any direction.

The flat desert plain containing the nugget is a lot tougher than the drifter is prepared to deal with (as his face slowly blisters and peels into the consistency of raw steak, you may find yourself wondering why he didn’t just keep his hat on) while holding back a few surprises of its own. There are points here where it seems like he might get out of it all just fine; there are others where he seems certain to die in the dirt. Sharp-eyed viewers will spot Susie Porter’s name in the credits. Let’s just say this film contains zero flashbacks but at least one pack of wild dogs.

Gold’s attempts to universalise – or just muddy – its setting don’t always work. Signs are written in a variety of languages (mostly Korean). When discussing the direction where civilisation is turning bad, pretty much every point in the compass gets a mention. Most distractingly of all, everyone has a wildly different accent. Efron uses his own (fine), Porter has an Irish brogue (also fine) and Haynes deploys an American drawl (very distracting).

Much of the story involves Efron scrabbling around in the dust while very possibly losing his mind. For an actor who in previous roles has seemed body-conscious to an alarming extent (as anyone who saw his impossibly ripped torso in Baywatch can attest to) there’s a refreshing lack of vanity here as the desert slowly takes him apart in every way. There are a number of twists, but at its core this is the story of a man against the elements – and gold isn’t the element he has to worry about.