Avoiding politics and preceding the plague, this wacky reboot is nevertheless a film for this moment, argues Adrian Martin.
Adrian Martin 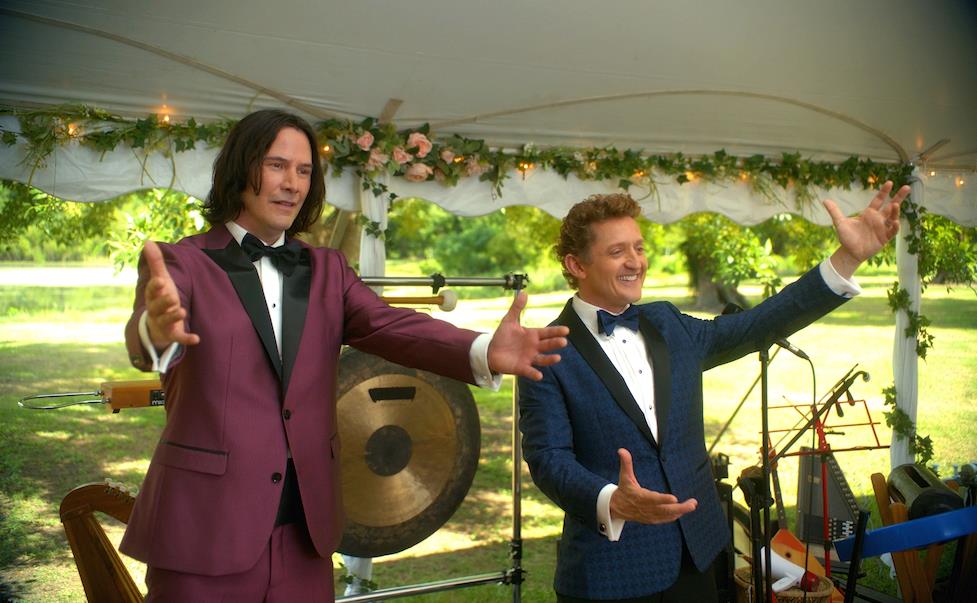 It’s Bill & Ted: The Return – the time we’ve spent waiting for this is almost identical to the interregnum sustained by David Lynch between Twin Peaks seasons 2 and 3 – but with nothing Gothic, melancholic or uncanny in play here. Nor is there any glamourising game with de-ageing techniques, as with Robert De Niro & co. in Martin Scorsese’s The Irishman. Here, Keanu Reeves (Ted) and Alex Winter (Bill) present themselves to our scrutiny just as they are now, in their mid 50s. It’s brave, and just a little disquieting. What kind of comedy can Bill & Ted possibly represent for us today? Wayne’s World, a closely related franchise in time and cultural sensibility, left itself safely in the past.

Although it was released both to theatres and online simultaneously during August 2020, this belated third instalment in the highly lovable Bill & Ted series strikes me as one of the first genuine post-COVID movies (not that the world is entirely beyond COVID yet, alas). It’s a comedy that, like Will Ferrell’s wonderful Eurovision Song Contest: The Story of Fire Saga, grabs its audience through saturation streaming on Netflix. We are currently seeing, in this realm, an intriguing return to certain idioms of 1980s and ‘90s pop culture. The nostalgia-niche for Bill & Ted films (me included in that demographic) is, after all, bound to be mostly staying indoors at present, rather than daring to venture out for Christopher Nolan’s Tenet or the new James Bond movie or whichever blockbuster is trying to reclaim the globe’s deserted picture theatres.

Post-COVID, Face the Music is also, in its way, a perfect YouTube movie. But we’ll get to that later.

To reboot the adventures of rowdy eternal-teens Bill & Ted 29 years down the track requires, naturally, a delicate narrative and cultural manoeuvre. This attempt starts exactly like Ghostbusters II (1989) did, only five years after its original: with our heroes washed-up on the birthday garden party, Z-grade nostalgia or hospital entertainment circuit. Whatever they once had, they’ve lost. In Bill’s & Ted’s case, it’s a matter of a certain cosmic promise never fulfilled: they haven’t managed to come up with that one amazing song which (according to their grand mythology) will unite the world, bring global peace, etc.

At the end of Excellent Adventure in ’89, our shambling pioneers were on their way to that divine destiny, presumably with the help of their 15th century British Princess wives, Elizabeth and Joanna, recruited into the Wyld Stallyns band – and note the subtle double standard in the gender casting here, since neither Diane Franklin and Kimberley Kates from Excellent or Annette Azcuy and Sarah Trigger from Bogus are back to reprise these roles, but are unceremoniously replaced by, respectively, Erinn Hayes and Jayma Mays. (See Vanity Fair’s comment on this.)

The band just needed a bit (or a lot) more garage practise. It was a good note on which to conclude, both suspended and exhilarated. Bogus Journey, for its part, started out taking Bill & Ted’s achieved Utopia for granted, and then sketched the malevolent, anti-B&T counter-insurgency that fiddled with time and reality – actually killing our heroes and giving them an eventful detour through the after-life before the fateful Battle of the Bands in San Dimas.

So how on earth to undo these surreal predecessors in order to generate a new plot that is still based on the writing and playing of one fateful song? Like George Miller’s Mad Max movies, Bill & Ted is a series that has no qualms about completely reinventing its premise from one instalment to the next, while still hanging onto and recycling enough familiar elements to prompt the nostalgic fun.

At the start of Face the Music, we learn that the universe is in big trouble – inexplicably (i.e., according only to the zany, fuzzy logic of this series), time is falling out of joint, and historic personages are wildly zapping from one period to another. Anything else, anything vaguely … political? Face the Music desperately flees almost any topical reference to current American or global reality; it doesn’t want to alienate any potential viewer.

This reflects, in fact, an oddly conservative tendency of many time-travel entertainments, beginning with the splendid Back to the Future trilogy (1984 – 1990), and even heavier stuff like the Terminator series: jokes about changing fads in cars, clothes and interior design are OK, but anything satirical about the dominant governmental powers is ruled off the table. As Jason Philip Wierzba has noted, aligning Face the Music with Tenet and Alex Garland’s TV mini-series Devs as current ‘stopwatch tales of entropy’: ‘All three films believe – or need to appear to believe – that major events of a cataclysmic nature feel or mean only at the level of close on-the-ground associations and intimacies’. The end of the universe, here, is strictly a family affair.

Be that as it may, within this particular fantasy, the forecast destiny of Bill & Ted must arrive – and quickly. Just like Ghostbusters II, Face the Music takes a while to wind itself up, having started in the brittle doldrums of its leading characters’ non-fame. We linger a while in marriage counselling with those now unhappy wives – a good idea that could have been a lot funnier. Dean Parisot is a talented director who did a great job with the affectionate Star Trek parody Galaxy Quest (1999), but he can’t get the slightly lumbering script (once again by Bill & Ted creators Chris Matheson & Ed Solomon) to work at the same zippy pace as the previous films.

Eventually, the story bifurcates, and things get necessarily busier. While Bill & Ted zap around in their own future – hoping to steal that one great song from themselves – their respective teenage daughters, Thea (Samantha Weaving) and Billie (Brigette Lundy-Paine), rummage through the past to form a hell of a band: Jimi Hendrix, Mozart, Louis Armstrong. These resourceful young women are definitely the highpoint of Face the Music – while also offering a comical, distorting mirror to Bill & Ted’s well-known repertoire of catch-phrases and awed reactions.

But there’s more! Added into the deadline-driven whirl is one of those Star Wars-type Councils where, in the distant future, the Great Leader (Holland Taylor) goes against the wishes of her mousy daughter, Kelly (Kristen Schaal), and sends a rather emotional terminator-thingy (Anthony Carrigan) to wipe out various parties. In this portion of future-world, things get very camp – an element that is new to the generic stew of the Bill & Ted series. I detect, for example, the clear influence of the TV series Crazy Ex-Girlfriend on certain drawn-out proceedings here, such as the re-introduction of William Sadler as the Grim Reaper from Bogus Journey (the heavy white make-up preserves this actor in a mythic agelessness). It would probably be impossible to reboot this franchise today without at least a little camp humour – yet the move threatens to hyper-ironise what was already plainly ironic.

Face the Music manages, almost miraculously, and without too much evident self-consciousness (although of course it’s all been calculated to a T) to be the most Inclusive, Diverse and Politically Correct mainstream entertainment of the year. The women characters are all crucial ‘agents’ in the action (only the soon-divorcing wives part is weakly resolved). The super-band includes People of Colour and Asians, as well as (of course) women. There’s some dude in a baseball cap named Kid Cudi (I confess, I’d never heard of him before) cruising around spouting New Age techno-wisdoms – he’s presumably there as part of the drive to hook an audience younger than the pop-nostalgia crowd.

[It] manages, almost miraculously,… to be the most Inclusive, Diverse and Politically Correct mainstream entertainment of the year

The whole film hinges on that special song that has to be composed, an anthem for the whole world. This is an incredibly hard element to actually, convincingly create for a film – even one as wacky and ironic as Face the Music. How are Parisot and his crew (including music supervisor Jonathan Leahy and composer Mark Isham) ever going to pull this one off? It doesn’t spoil anything plot-wise to reveal that this international masterpiece has no lyrics! It’s less a Big Song than (in honour of Skyhooks) a ‘million dollar riff’. Voilà! – cultural and language differences transcended in one almighty jam, as infinite Bills & Teds distribute musical instruments to all the peoples of the planet.

By this late point, I readily confess, Face the Music had me in its thrall. It builds up its frantic momentum, even if very few of the gags are, in themselves, terribly inspired. And the ending works, against almost all odds. After a seemingly infinite set of credits – it’s only those that really remind us that this is, after all, a big movie production, not just a Netflix Special – there’s also a bonus extra worth sticking around for.

But between the finale of the story proper and the Easter-egg outro, there’s another, key ingredient that gels Face the Music into a spectacular triumph of what Philip Brophy once identified as audience-product bonding. I am referring to the imaginary YouTube montage/collage of people everywhere, on little video screens, in the same musical groove laid down by the extended Bill & Ted family. This resembles nothing so much as Koen Theys’ grand and giddy 2010 installation art piece The Final Countdown (which I witnessed repeatedly at the Rotterdam Film Festival of 2011), which assembled 2,000 YouTube clips of ordinary people performing the opening bars of Europe’s 1986 pop hit of that name (once heard, never forgotten … ).

In this final coup, Face the Music abolishes and remakes reality – while, at the same time, offering its only, almost-explicit nod to reality’s global lockdown during most of 2020. As I watched the ecstatic blitz of pseudo-YouTube clips, I remembered a line from Leonard Cohen’s song ‘Democracy’: I’m just staying home tonight, getting lost in that hopeless little screen.