Axiom Verge 2 attempts to create a free-form Metroidvania, but is let down by its lack of variety and incentive to interact with content.
Chantelle McColl 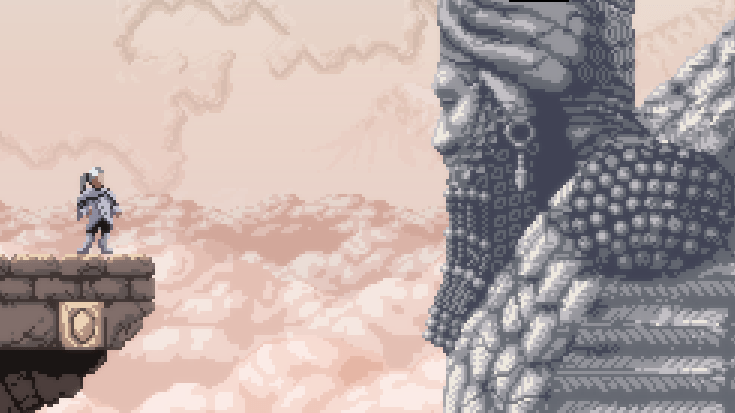 Axiom Verge was, at the time of its release in 2015, a standout callback to the 16-bit era of Metroid-style exploration-heavy platforming games. It featured stylish pixel art, a great chiptune soundtrack and complex map design filled with hidden paths and obscured objectives begging to be discovered. Each region felt unique, not only because of varied aesthetics, but because you were forced to adapt your playstyle to defeat new enemies with over 20 uniquely interesting weapons available to you. Backtracking for weapons and abilities was exciting because accompanied with it were new challenges. Exploration never hindered narrative urgency because you were reminded of the looming climax in every region with the introduction of grotesque characters and foreboding notes.

Axiom Verge 2 trades in this variety of gameplay in order to experiment with an open, free-form structure that, unfortunately, reveals the shortcomings of its less refined components.

Axiom Verge 2 is set in Kiengir, where protagonist Indra Chaudhari is tasked with traversing this machine-like world in hopes of finding her daughter. Armed with limited knowledge and a trusty pickaxe, Indra is submerged into the conflict of this alien planet by the whisperings of a mysterious voice that leads Indra to an urn. Breaking it reveals not only superhuman abilities that entwine itself with Indra, but an Arm—a special being made from nanomachines. What transpires is a race to find any remaining Arms on Kiengir before its impending collapse. The more Arms Indra saves, the more she understands the world’s war-driven history. Indra must navigate her subsequent entanglement with its politics to survive.

The world of Kiengir is made up of open, earthy-toned regions that Indra explores by following map coordinates that take her from one objective to the next. The game encourages stealth and exploration over combat to clear each region by adding visibility meters on enemies, skippable bosses and a surplus of exploration-focused abilities that contrast Indra’s weapons: a pickaxe and boomerang.

The restricted combat approach to Axiom Verge 2 makes exploring regions approachable and consistent. Roadblocks, as they may have appeared in the first game, are bypassed in the second with a plethora of exploration abilities: a compass that reveals the direction of Arms; a map; the ability to teleport between save locations around the map. She even gains the ability to transform into a drone, which receives superior upgrades: a grappling hook and the ability to fly. Axiom Verge 2 transforms the common Metroidvania gating, which is complex in design, by leaving you to explore the world without a clear objective. The result is a consistent, uncomplicated experience.

While the approachable gameplay makes exploration straightforward, the lack of traditional combat gating negatively affects the game’s pacing and progression. Indra travels from one objective to the next through similarly styled regions, with the same task of exploring for Arms to gain access to new areas.

Combat within these regions doesn’t reward players – you don’t receive currency or experience from combat, which means enemies can often be ignored by grappling or flying over them. In comparison, fighting the optional bosses is incentivised with skill points upon defeating them. The skill points can be used to increase health, damage, speed and abilities, but I stumbled across enough while naturally exploring the map to make the boss fights unnecessary.

The bosses do act as a respite from exploration, but instead of invoking a challenge they feel tedious because your weapons limit your manoeuvrability. I either had to get too close for comfort and trade health for damage with the pickaxe, or I would be unable to hit the boss at all with the boomerang’s rigid trajectory that couldn’t keep up with the boss’s sporadic movements.

As a consequence of the limited reward for defeating the boss, you’re inclined to treat it for what it is: optional. But without the incentive to explore the optional content, what’s left in Axiom Verge 2 is repetitive exploration.

Axiom Verge 2 does, however, attempt to intensify pace changes with puzzles. The puzzles resemble mini-game obstacle courses that require Indra to navigate from point A to B in a separate, stylised 8-bit level. These levels can be treated as isolated breaks from the rest of the game, but unfortunately, they mimic the same pattern of exploration and following objectives that becomes tiresome from its overuse.

Furthermore, the exploration is made monotonous by the lack of distinct style and variation in each region. It’s difficult to stay present while exploring when most regions exhibit the same earthy aesthetic and level design. The memorably gritty and grotesque design of the first game is lost in the second to a more washed out and consistent style. The enemies aren’t specific to particular regions, so their repeated presence only further compounds the game’s inability to keep you interested.

As a consequence of this limp pacing, and subsequent experimentation with structure, the plot struggles to build momentum and generate stakes you care about. Tension is built through interactions with other trapped characters on Kiengir, the sinister and good-natured Arms whispering in Indra’s ears, and through foreboding notes Indra finds along her journey, but the stakes rarely translate into tense gameplay. Even when the plot reaches its final confrontation with the antagonist Amashilama, it’s hard to be taken seriously because you aren’t being tested in the lead up to the climax.

Indra’s power progression also feels limited. Where the first game allowed you to choose between 20 weapons and techniques to defeat the final boss, Indra is armed only with the starting pickaxe and boomerang that, at this point, will have become tedious to use. They generate a dissonance between the severity of the plot and Indra’s final upgraded form: even by the end of the game, playing Indra doesn’t feel powerful enough to face the final task.

Axiom Verge 2 incorporates an interesting combination of approachable mechanics to an otherwise difficult and potentially alienating genre. The game’s approach to exploration makes the world fluid and straightforward, which parallels its consistent aesthetic design throughout the regions. However, the repetition ultimately reveals poor pacing and progression. Axiom Verge 2’s attempt to create a free-form Metroidvania is let down by its lack of incentive to interact with optional content and create variety in combat and puzzles.

A Nintendo Switch copy of the game was purchased and played for the purposes of this review.