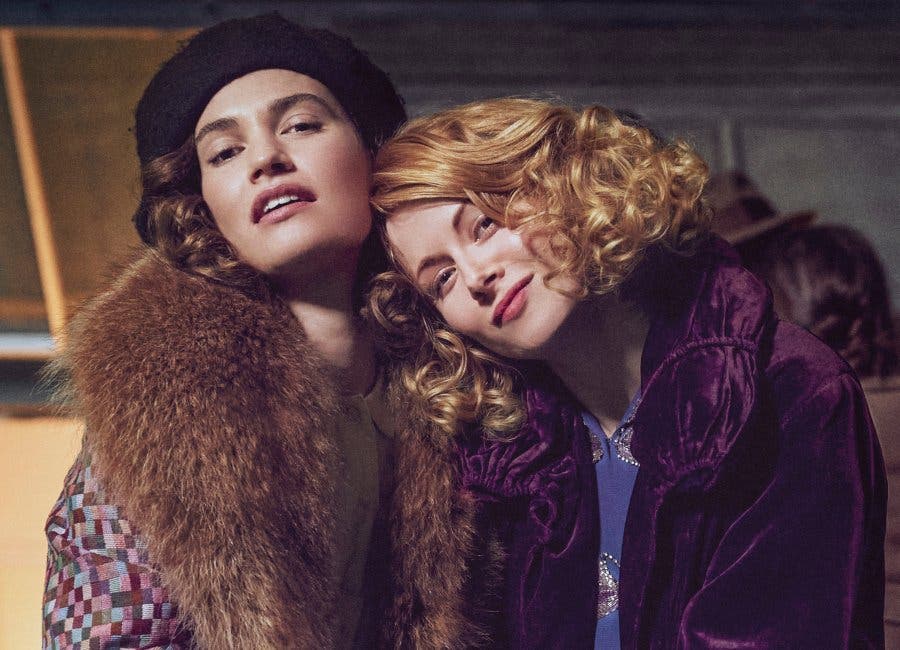 Lily James and Emily Beecham in The Pursuit of Love.

Emily Mortimer’s adaptation of The Pursuit of Love begins at the ecstatic high point of Linda Radlett’s short life. She’s sunning her enormously pregnant body on the roof of her Chelsea townhouse (a gift from an eccentric and concerned friend) wearing nought but sunglasses, scarf and lipstick. Her sable coat lies close by… it is only spring after all. She flicks through Country Life, gently pats her sleepy-eyed French bulldog, then her taut tummy. We hear Pete Townshend strumming his ukulele and crooning, sweetly, ‘I like every minute of the day.’ Perfection. But it’s 1941 – wartime – and the shining peace in London is soon rent by the whistling descent of a German bomb.

‘I’ve had five months of perfect and unalloyed happiness,’ Linda (Lily James) tells her adoring cousin and long-suffering best friend Fanny (Emily Beecham) as they drive towards the sanctuary of the Radlett family’s Oxfordshire estate. ‘Very few people can say that in the course of long lives, I imagine.’ Fanny, our narrator, wonders, privately, if ‘five months of perfect happiness’ were worth ‘all the chaos and confusion of the other 29 years.’

A regular guest at the vast, ugly, north-facing house, Fanny gives us a quick account of one violent Christmas spent with Linda after another. The tyrant of the house – her uncle Matthew, Linda’s father –  loathes foreigners and educated women… Fanny most of all!

It’s in this rapid-fire recap that Mortimer, a first-time director, announces herself as a bold and brilliant filmic stylist: this is not Brideshead Revisited! While Georges Delerue’s Le Grand Choral chugs away on original instruments, we cut from stampeding children to a failed suicide attempt to Linda getting a whipping from her father (Dominic West is truly terrifying) to a hunt where children are the prey, with Matthew on horseback and four bloodhounds in hot pursuit.

While Fanny enthuses: ‘she was a wild and nervous creature, full of passion and longing’ we watch Linda galloping down a country lane in straw-coloured riding breeches with the same colourful scarf around her neck she will wear years later on the roof in Chelsea. There’s not a wasted frame in three hours. Each vignette is slyly clever; whimsical and coruscating… like a polished brass bear trap.

Nancy Mitford admitted the first chapters of her 1945 novel The Pursuit of Love were largely autobiographical. Like her heroine Linda, Mitford was only ever taught French and how to ride a horse. So, how on earth did the cossetted Linda end up twice married, and pregnant with a third man’s child? More to the point, how did she get the hell out of Dodge? If anyone could answer the latter riddle, Mitford could.

The first episode of this utterly adorable three part series is devoted to the fraught and passionate relationship between Linda (Lily James) and Fanny (Emily Beecham) and to the memorable Christmas of 1927. At the age of 17, the girls are in love with men they’ve never met: Fanny with ‘a fat, red-faced, middle-aged farmer’ and Linda with the Prince of Wales. ‘Even then,’ laments Fanny, ‘Linda’s fantasies were altogether more ambitious and dangerous than mine.’

Linda enthuses: ‘Don’t you just ache for life to be exciting, like this?’ Fanny replies, cautiously: ‘I think I’d like to observe exciting things.’

Perhaps Linda takes her headstrong lead from Fanny’s flapper mother, ‘too beautiful and too gay to be burdened with a child at the age of nineteen.’ ‘The Bolter’ (as she came to be known) left her husband, and her daughter, when Fanny was just a month old. But Linda doesn’t aspire to be wicked and adulterous, she wants True Love. ‘The kind which only comes once in a lifetime and lasts forever.’

The arrival on the scene of their avant-garde neighbour Lord Merlin (Andrew Scott), that winter, is an electrifying shock to the two friends. When Merlin and his entourage crash a staid ‘coming out’ party for Linda’s older sister, Louisa, Mortimer emphasises just how shocking their presence is by having the blow-ins dance to T-Rex’s Dandy in the Underworld.

Likewise, when the girls steal a car to visit a boy in Oxford – a Fascist-leaning wannabe plutocrat who will become Linda’s way out of home detention, via matrimony – Le Tigre’s manic feminista song Deceptacon fires up. The soundtrack is a constant source of anachronistic delights. Often, when iconic songs are pillaged like this, the music becomes a distraction or, worse, unbalances the story-telling gyre. But, here, the choices – and the timing of the delivery of those choices – are mostly right.

If you are unfamiliar with the story of The Pursuit of Love, try to avoid spoilers! You are in for a real journey, variously delightful, harrowing and heart-blowing. Sometimes all of those at once. Though Mortimer slashes many of Mitford’s most devastating lines for economy, she compensates by fleshing out Linda’s character, in particular, and Linda’s codependent relationship with Fanny. (Intriguingly, Fanny becomes the unknowable one.)

Lily James is a definition of naive vivacity as Linda, unable to disguise or mute any of her feelings. Despite doing the lion’s share of the talking, Emily Beecham says far more with her agile, wary – and often accusing – eyes.

To be honest, the only weak link in the cast is Mortimer herself in a cameo as The Bolter. She’s like an ageing, dissolute Bubble, the Jane Horrocks character from Absolutely Fabulous. It’s a jarringly flimsy and unconvincing rendering. Idiotic even.

Trainspotter note: keep your eyes peeled… the ‘London Ballroom Band’ has Spider from the Pogues playing alongside a couple of members of The Bad Seeds.