What happens when the sun rises on a new day after many identical moons? Russian Doll offers clues that Groundhog Day and Palm Springs can't.
Izzie Austin 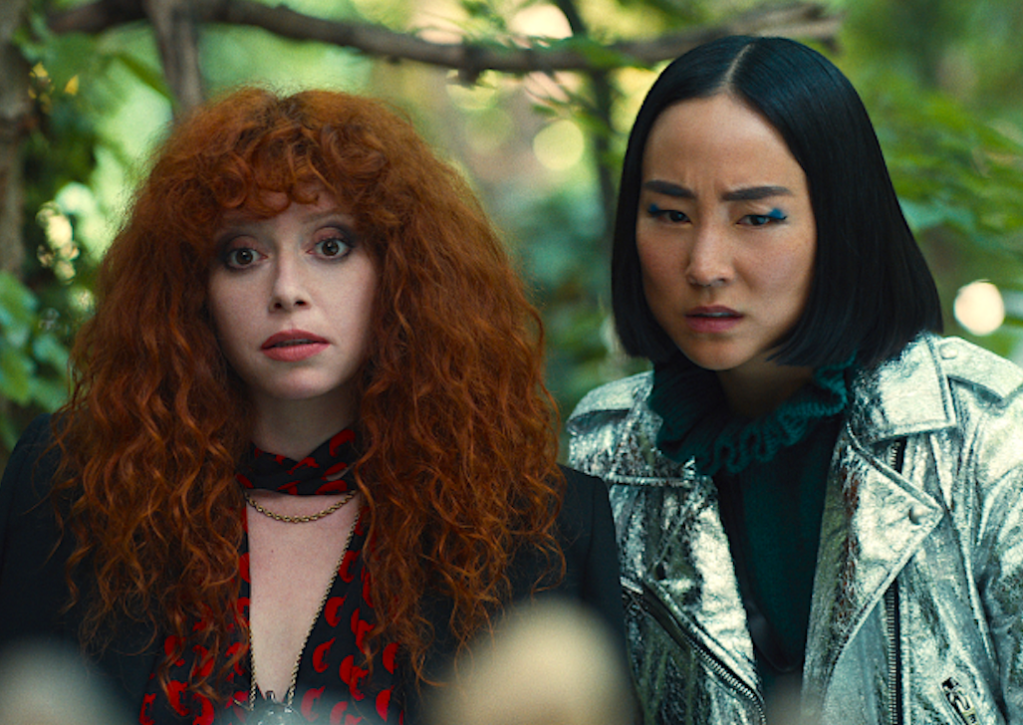 Where are we? More like, when are we? Russian Doll breaks the time loop. Image: Netflix.

Russian Doll Season 1 followed hard-drinking videogame developer Nadia Vulvokov (Natasha Lyonne) as she tried to find her way out of a loop that began with her birthday and ended with her many, many deaths.

In Groundhog Day (1993), Bill Murray’s character Phil Connors wakes up every morning to find it’s February 2. After several February 2s filled with mounting panic, he accepts the day as a challenge and devotes his time to becoming the kind of person who will wake up on February 3. The film gives no definitive answer to the question of how many February 2s Connors endures, but co-writer and director Harold Ramis has given various answers in interviews, ranging from 10 to 40 years.

But however many runs he took at February 2, it was enough that he is ecstatic to wake up on February 3. He has been released! He has become a master of February 2 and his reward is February 3! His life is his again, to be lived only once.

But is he going to be OK?

This man has just spent decades becoming an expert in February 2, and now he only has one chance to do February 3? 4? 5? What if he gets them wrong, what’s he going to do? Just get on with his life? What if February 3 is another loop? Will he feel trapped again? Or will he be thrilled by the opportunity to master another day?

Palm Springs (2020) offers another take on a time loop – one that can’t be mastered but can be escaped. Its protagonists end the film cautiously optimistic about their future, which we the audience don’t get to see. Happy Death Day (2017) has a sequel, Happy Death Day 2 U (2019), in which the protagonist, having solved her own murder and made it out of the loop, is suddenly thrust into another one.

The sequel ends with a tease for future instalments, but otherwise neatly seals off the narrative. Even with a sequel, Happy Death Day can’t quite answer the question of what to do after time stops repeating.

Russian Doll, as an ongoing Netflix series, has an opportunity to answer that question in a way those film can’t. The solution for Nadia in season one is not to master the day like a puzzle, but to find Alan (Charlie Barnett), who is experiencing his own loop, so that they can save each other.

Season 2 picks up several years later, as Nadia is approaching her 40th birthday, and attempts to answer the question of how she’s handling the fact that time works again. The answer: not great.

Well, she’s doing OK. She finds ways to distract herself from her own mortality and avoids thinking about her godmother Ruth’s (Elizabeth Ashley) worsening health. Alan doesn’t seem to be coping any better, having somehow become even more uptight and anxious than he was in the first season.

It becomes clear that Nadia still has some serious unresolved trauma when she gets on the subway and finds that it takes her to 1982. There – or then? – she inhabits the body of her mother Nora (Chloë Sevigny), who is in the last few weeks of pregnancy and in the middle of losing the 150 gold Krugerrands that made up Nadia’s grandmother Vera’s (Iren Borden) life savings, and which was supposed to be Nadia’s college fund.

We learned in the first season that Nora lost 149 of the Krugerrands, and the 150th hangs around Nadia’s neck as a constant reminder of her grandmother’s strength and her mother’s weakness. Nadia sees the time-travelling subway an opportunity to ‘fix’ her family history. It quickly becomes clear that this is not going to work.

Nadia tries to use Nora’s body to make better decisions, but Nora’s friends just see her behaviour as erratic. Nadia’s flailing attempts to fix the past only cause problems in the present. While she’s trying to force her mother to hang on to her inheritance, she’s missing work without explanation and is absent from Ruth’s life during a health crisis.

Time travel and time loops have a similar appeal, an appeal Nadia, a videogame developer, would have understood long before she entered her first loop. What if I had infinite chances to get things right, even if it’s just one day? What if, like I can with a videogame, I could start again knowing everything I know now? What could I change if a magic tram turned me into my dad?

For Nadia, exiting the time loop was the easy part. Now she has to live the rest of her life only having one go at every day that passes. She makes every decision without already knowing the outcome. All she can do is make her plans, try not to fixate on what could have been, and put one foot in front of the other. Like all of us, she is doing her best with incomplete information.