The death of Martin Armiger in his French paradise, surrounded by love, brings peace but a huge sense of loss.
David Tiley 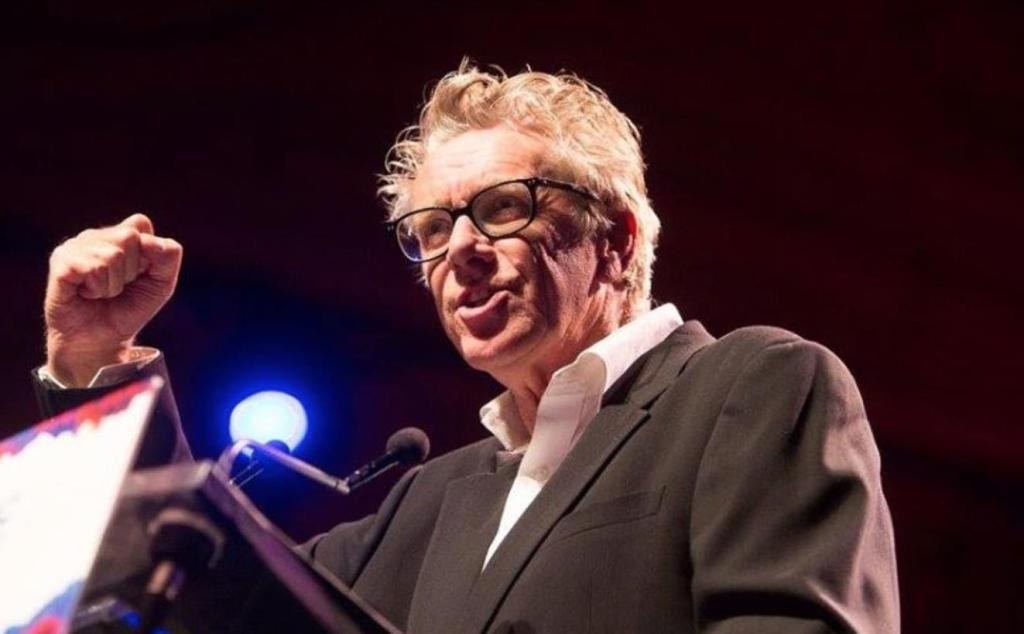 Martin Armiger receives the inaugural Distinguished Services to the Australian Screen Award from his guild.

According to Caitlin Yeo, a key screen composer and the current president of the Australian Guild of Screen Composers, ‘Our entire community is absolutely devastated today. He was absolutely instrumental in teaching nearly all of us. His legacy is gargantuan.’

Martin Armiger was a musician, composer, rock veteran, teacher and agitator. He ran the screen composition course at the Australian Film Television and Radio School for fourteen years and was president of the AGSC for seven years, after four years as vice-president.

He wrote the music for over fifty films and television projects, was musical director for the ABC series Sweet and Sour, and composed for Stringer and Come In Spinner.

The  Australian public can hum along to him without knowing it. He wrote a new version of the ABC news music, and then a minor rearrangement to freshen it up because it was still so loved.

He was surely one of the defining people in Australian screen composition. After he retired he went to France with his wife, the writer Maureen O’Shaughnessy and set up Maison Lyre, a retreat and intensive creative opportunity in both music and words.

They conceived it as a place of joy and serenity, with their trademark mischief and imagination, which would push against the limits of cultural and personal achievement. But he also had a lung disease. In his last Facebook post he wrote:

‘This is a sort of goodbye. I’m finishing with fb. For the past few months I’ve only put up stuff about going into or getting out of hospital. And that’s usually been out of date. Well I’m in hospital again, in Brive-la-Galliarde, and can’t really follow or access messages easily. Thanks for all the posts, links, stimulations, and provocations. My closest friends have my email address, which I can still reach, though I can’t write much. Love to all and good luck with everything.’

He was full of praise for the French doctors who nursed him through bouts of pneumonia, smiled past his oxygen tube and tank in photographs, and kept on loving his family to the end.

He came from a remarkable mob. The Armiger family was music incarnate. They came from Hertfordshire to Elizabeth in South Australia in 1965, to join the other stunned migrants under a brassy sky, housed in neat squares to work the car factories in their prime. Both parents sang and played, and at least four of his brothers became professional musicians.

He joined a remarkable cadre almost by accident. He started at Bedford Park Teachers College in Adelaide and grabbed the chance to move to Flinders University, where the drama course introduced him to formal theatre and then anarchic pre-punk explosions called Toads Nitely. After that he wrote his first music for film, on Drac, the graduation film for David Stocker in the inaugural AFTRS course.

Then came the Melbourne bands: Toads, The Sports, the stage musical A Night in Rio, the title track for Bert Deling’s Pure Shit, and ultimately The Sports, which also toured the UK. When that collapsed in 1981, he moved out into session work and arranging and the deep study of film music which occupied the rest of his life.

Said Yeo,  ‘He had an incredible smile in his eyes. He had a determination to fight for the best possible outcome, every single time. He was always motivated by making great music.’ Old rock muso that he was, he learnt to fight through exhaustion and confusion, teaching his students that this was when the music really flowed.

‘When things got really difficult, that’s when he came alive even more. He was an agitator as well which was really fantastic. He taught us to fight for the music, and fight for every moment because every moment meant something.’

‘He added to the depth of our composition and he wrote very well about it. He read voraciously and never saw things from the outer but was always broader and more considered. He was deeply and profoundly thought-provoking.’

I had the privilege of encountering Martin every few years, annoying him and asking him to use his superb writer’s voice. But I always knew he was on a far richer journey. Writing is still and private, an assault on time and the distance between people, while his musical art is a whirling, stamping dance across all human life. Screen music is a communal ceremony, creating and riding emotion as part of a greater whole.

He began as a social outsider, forging into a particular hierarchy, created and enriched by his musical clan. He moved across our world like a musical experiment across a score, improvised but focused, with a touch of mystery until it dissolves into silence.