Ian Richter was 'a generous and gentle soul who loved the world and all its riches', according to Michelle McGahey in her obituary for the Australian Production Design Guild.
ScreenHub 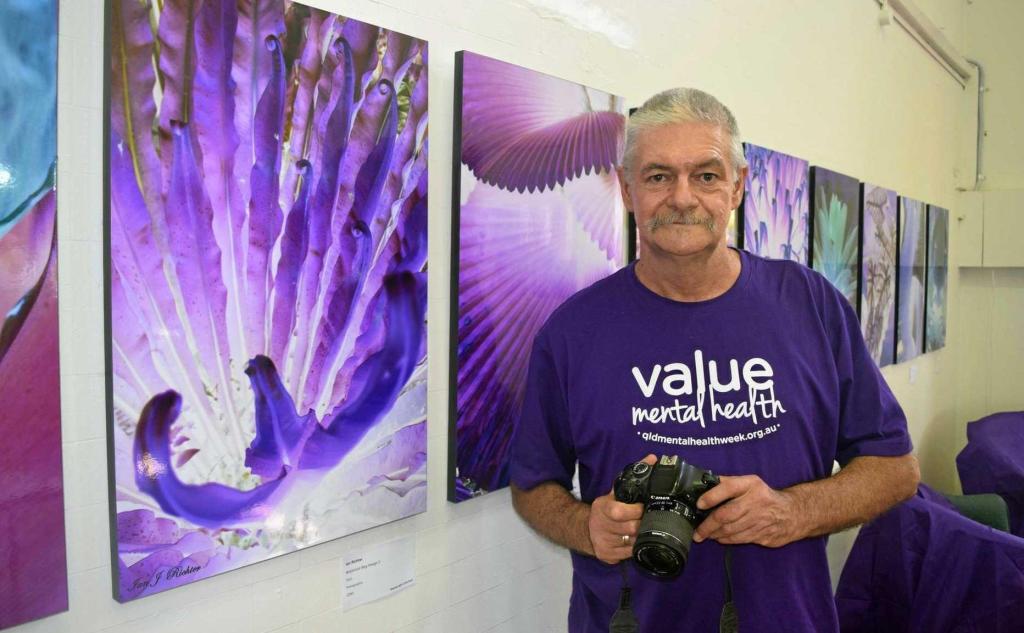 Ian Richter at an exhibition. Image: via APDG, by Amber Macpherson, used in Noosa News.

The death of scenic artist Ian Richter at the age of 62 is mourned by the Australian Production Design Guild, which gave him the 2018 Artisan Lifetime Achievement Award for craft, even as scenic artists have been largely replaced by digital post production.

He began his career in theatre at J.C. Williamsons in Melbourne in 1976, and caught the film bug almost immediately with The Rollicking Adventures of Eliza Fraser. A decade later he was being credited on major Australian features including 10ba SF romp The Time Guardian, The Navigator: a Medieval Odyssey for Vincent Ward, Evil Angels by Fred Schepisi, NZ director Kevin Reynold’s Rapa Nui, and Chris Cudlipp’s rom-com Dear Claudia.

Baz Lurhmann opened the gates to studio work on Moulin Rouge which took him to Ghost Rider, Knowing and Don’t Be Afraid of the Dark.

Michelle McGahey, APDG Queensland Co-Chair, shared an obituary with the APDG written with support from Bill Undery and Peter Collias , which we reproduce with thanks.

A flick of a brush, an arabesque and our friend and colleague Mr Richter has finally bid us adieu.

After an interesting start to life in Hobart Tasmania, the bright lights of Melbourne soon beckoned – well-worn tulle and brushes were swiftly packed.

The film Robbery Under Arms in South Australia was where Ian met long time friend and mentor George Liddle along with scenic artist Peter Collias aka Sweetie.

‘We were in a pub out west somewhere, hanging with an interesting bunch of locals and grizzly truckers, I left Ian alone for a few hours. Concerned I went back to make sure he was OK. Ian was holding court with all and had several of the burly blokes up doing Zorba the Greek. I never needed to worry about Ian after that night,’ Peter recalls.

Ian’s talent was simply unmatched. He had a beautiful sense of composition and an eye for exquisite detail. He lived by the rule of 3 – dividing his canvas in a certain way, while avoiding anything even: ‘Darling you never do things in pairs always in 3s!!!’

Under pressure by himself to achieve the highest possible standard, Ian often needed to execute his work at the 11th hour, and into the early morning … A creative, who against all the odds, seemed to execute any major art undertaking in record time, glass matt paintings and large scenic backdrops could be conquered overnight!

Ian spent part of his career in South Eastern Queensland. Warner Bros Movie World and the film studios lay host to an abundance of his work from local productions to large US feature films. A regular at Trader Dukes watering hole, Ian could be seen on most afternoons enjoying a quiet ale and a couple of dozen cigarettes.

Late in his career, George Liddle remembers, he abandoned his life of excess, and his health improved considerably.

Ian followed his passion for both B&W and colour photography throughout his life, accumulating a mass of images both digital and printed.

The Sunshine Coast provided a place of solace and solitude where Ian had several photographic exhibitions in his later years. Ian was planning to publish his work in 3 large volumes. Volumes that documented his growth as an artist and a person with mental health issues. A person misunderstood by many, Ian had hoped to publish the books to spotlight mental illness in our community. Ian had finally found his purpose …

Ian would often travel down to Mullumbimby to spend time with good friend and artist Bill Undery. Bill and Helen Undery provided a creative and nurturing haven for Ian to spend time. They both encouraged and supported his new direction. ‘Don’t ever leave your false teeth on the bedside table in Bill Undery’s house!’ Ian soon discovered, as Bill’s dog loved a chew on a set of dentures.

Ian had a drive to live life passionately and with no regrets. Fearless in the pursuit of a good time, a cheeky grin and a set of bloodshot eyes often reminded you that he existed on very little sleep and a few bourbons most of the time. A generous and gentle soul that loved the world and all its riches.

Ian passed peacefully on the Sunshine Coast with good friends Bill and Helen Undery nearby.

Further tributes can be found on the APDG Facebook page.