The Strangest Oscars in History?

Critics attacked Soderbergh's Academy Award ceremony for its anticlimax and lack of spectacle. But there were deserving winners, intimate moments and a real sense of an industry grappling with reality over fantasy.
Rochelle Siemienowicz 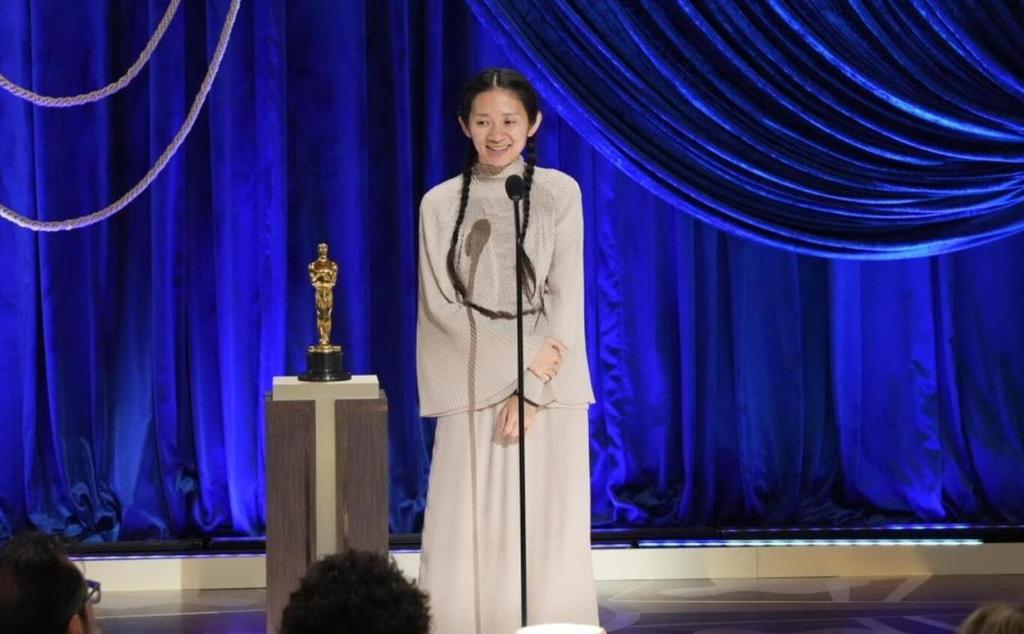 Wearing white sneakers and talking about the essential goodness of human beings, Beijing-born Chloé Zhao was without a doubt the face of the 93rd Academy Awards as she accepted the Best Director Oscar for Nomadland.

‘Small’, ‘serious’ and ‘humble’ could be words used describe both Zhao and the televised ceremony, which was produced by Steven Soderbergh, Stacey Sher, and Glenn Collins. They used pandemic limitations to reinvent the glitzy awards-show formula and promised a movie-length cinematic treat for viewers. Soderbergh had said earlier that he wanted ‘the whole thing to announce itself out of the gate as different.’

It sure did that, but different doesn’t always mean good, and reactions have been harsh. Ratings for the American broadcaster ABC were at all time low.

But for all the complaints about departures from tradition, few would criticise the wins for Nomadland, a film that seemed fitting for the ravaged and solemn mood of post-Trump America right now.

Nomadland also won Best Picture and Best Lead Actress for Frances McDormand, who gave an odd, minimalist speech about loving to work, and the work being her sword. Was she talking about the fight to make films, or the rights of Americans to dignified employment (a point made in the angry and elegiac movie)? She used the platform to make the only plea of the night for audiences to go back to cinemas as soon as they could, to see the film on the biggest screens they could find.

The oddest thing about the night was the fact the Best Picture winner was announced earlier in the proceedings, instead of its usual status as a culminating moment of group hugs on stage. Instead, the Best Actor was announced in the last slot, with Sir Anthony Hopkins winning for his acclaimed performance as a man with Alzheimer’s in The Father.

Sadly, Hopkins was asleep in Wales on the other side of the world, so certain was he that the sentimental favourite would win: the late Chadwick Boseman for Ma Rainey’s Black Bottom. No Boseman win and no Hopkins, so that was that. Goodnight and goodbye from DJ Questlove, who provided the scant music for the evening.

What this actually went to prove was how secretive the winners remain. The surprise is real, even for the producers of the show! You have to respect that. (Hopkins released a speech the following morning to his Instagram page, paying tribute to Boseman and re-stating the fact: ‘I really did not expect this.’)

There were no televised live musical numbers in the brisk, brief ceremony that took place in an intimate blue-curtained amphitheatre constructed inside LA’s Union Station. Attendees were seated on plush velvet banquettes at small spaced tables, and filmed with roving wide-angled lenses that sometimes got it right and sometimes didn’t.

The was no set host for the proceedings, with actress-turned-director Regina King opening things up in spectacular silvery blue Louis Vuitton. She tripped on the badly designed stair, as did many others, but her dress has been roundly acclaimed as a fashion highlight of a fairly low-key red carpet with odd bright spots.

My Best Dressed of the night. Hands down. #Oscars pic.twitter.com/Q0BhNv2A2m

The most charming speech of the night was undoubtedly by Yuh-Jung Young, the Korean actress who won Best Supporting Actress for her role as the unconventional grandmother in Minari.

The lowest point of the night was the sped-up In Memoriam tribute montage which ran so fast nobody could make out the names and faces in time. Frankly, it made me angry with its disrespect to those who’ve passed. Almost worse than not mentioning them at all. I wasn’t alone.

So too the extended Humanitarian Awards segments celebrating Tyler Perry and his admirable work for the disadvantaged in Hollywood seemed to take up too much time in a show supposedly devoted to the movies.

You can read the full list of nominees and winners over here. Some quick highlights:

In the lead-up to the Oscars we published predictions by our resident Awards nut Grace Boschetti. She got most of them right.

I happened to be sitting next to Grace at the Industry Oscars event held at Melbourne’s Cinema Nova yesterday. (Apparently this was the 30th year Natalie Miller has held the event with her friend Pete Smith compering. It’s a fabulous daggy heartwarming event if you ever get to attend.) Watching the Seven broadcast projected onto the big screen, Grace was outraged at the re-ordering of the awards announcements, indignant at the In Memoriam segment, and nonplussed by the lack of pomp and ceremony. She was also absolutely thrilled by the outcome for Nomadland, not just because it was a film she loved, but because in Oscars history it was groundbreaking. As she whispered in my ear like a fervent film geek, ‘It’s a win for a female director, only the second in Oscars history, and Zhao is the first woman of colour to be nominated for the directing award.’

2021 also marks the first year more than one woman has been nominated for best director, with Fennell as the other nominee.

How refreshing it was that these Oscars were not so white and not so male. This was a year when people of colour, women and the deaf community were very present. But lest we get overly thrilled about the new diversity on show, consider this. As the Hollywood Reporter noted: ‘Among everyone who took home at least one statuette at the 2021 Oscars, 25 are white men, eight are white women, four are Black men, four are Black women, two are Latino men, one is a Latina woman and three are Asian women.’ White men aren’t doing too badly.

Finally, as Screenhub film lead David Tiley insists, it’s worth reading Chloé Zhao’s acceptance speech, and noting the fact that China has ignored her win and scrubbed it from their media over a comment she made about China being a place where there are ‘lies everywhere’. Even Hong Kong did not broadcast the Oscars this year. What this means for the Chinese release of Zhao’s forthcoming Marvel film, Eternals remains to be seen. Here is her speech:

‘Thank you, thank you to the academy.

Thank you to my brilliant, brilliant fellow nominees.

Thank you to my entire Nomadland company. What a crazy lifetime journey we are on together.

I’ve been thinking a lot lately of how I keep going when things get hard. And I think it goes back to something I learned when I was a kid.

When I was growing up in China, my dad and I used to play this game. We would memorize classic Chinese poems and texts, and we would recite them together and try to finish each other’s sentences. And there’s one that I remember so dearly, is called the Three Character Classics, and the first phrase goes rén zhī chū xìng běn shàn.

“People are inherently good”. And those six letters had such a great impact on me when I was a kid, and I still truly believe them today. Even though sometimes it might seem like the opposite is true. But I have always found goodness in the people I met, everywhere I went in the world. So, this is for anyone who has the faith and the courage to hold on to the goodness in themselves, and to hold on to the goodness in each other, no matter how difficult is to do that. And this is for you. You inspire me to keep going. Thank you. Thank you.’

She went on to tell the press, ‘I feel I’m very lucky I have parents who have always told me that who you are is enough. And I know who you are is your art.  So I always tried to stay true to myself, and be surrounded by really great supportive, talented people. So I really share this moment with them.’

She paid particular tribute to Frances McDormand and Wolf Snyder, the sound recorder and mixer who died by suicide from a major depressive illness shortly after the production. As McDormand said, ‘Wolf recorded our heartbeats.’

Chloe Zhao subsequently told Seth Meyer that the event was really intimate because so many nominees are co-workers and classmates and producers on films she has also been involved with. ‘We know each other way too well,’ she said.