François-Pier Pelinard-Lambert from Series Mania warns us that our national passion for reality TV is a real problem for international sales.
David Tiley 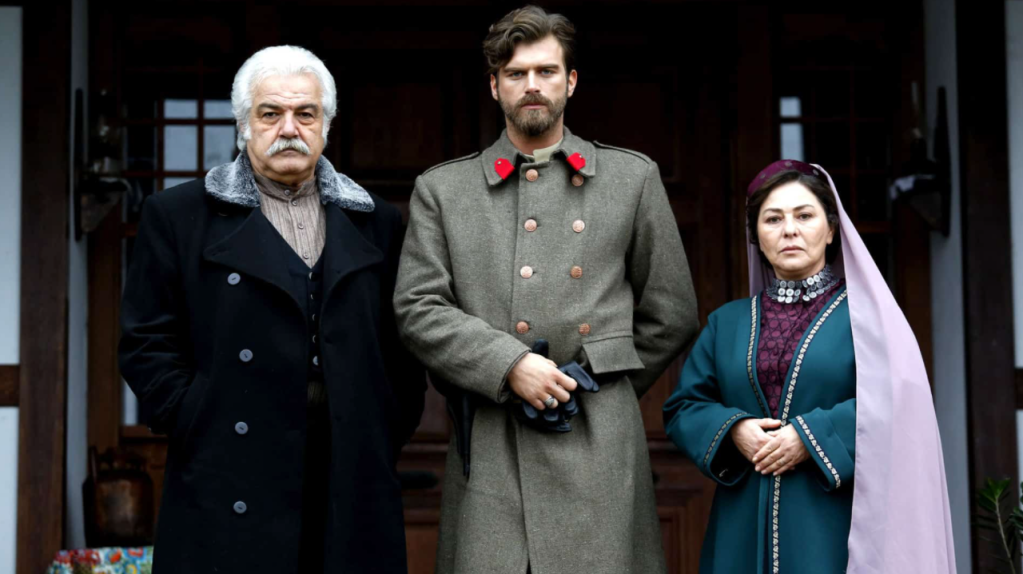 Love is a Battlefield is a typical ‘dizi’, a Turkish series selling well around the world.

She asked him about the current impact of COVID-19.

Backed by temporary insurance guarantees, the TV sector barely stopped production, unlike features, which were severely impacted. In the last twelve months, 1300 new shows were commissioned in the Asia-Pacific and more than 700 in both Europe and the United States.

Compared to 2019, production commencements are up by 40%. But a deeper take reveals that US productions dropped by 21% in both 2020 and 2021, though they are now rising solidly. South American countries are still flat and down by 60%, which is a tragic loss.

The rising numbers are partly explained by a significant change in the type of show. These are 6-8 hour miniseries rather than long-form dramas, or franchise series. He doesn’t provide the number of hours, but that is rising as well.

Australia has been very stable with neither a real drop or a real peak. But Denmark, which Pelinard-Lambert sees as comparable, has doubled the number of shows, and Turkey is producing four times more series than Australia. The reasons are to do with an export market eager for pro-family dramas and a keen sense for quality soaps, so distinctive they have their own name, ‘dizis’.

A strange kind of turmoil

‘For the last ten years,’ he said, ‘everyone is expecting the bubble to burst, that too much money, too much stuff is produced all around the world, not enough time to see everything.’ That is a recipe for pessimism, in which cable and terrestrial television continues to die, starved of revenue, outclassed by a few streaming companies which take over the world.

But he argues that some budgets are completely outrageous – US$150 million per show in some cases. They will have to come back to earth because there is a ceiling for the number of subscribers and costs will collide with earnings.

‘This is where the big problems will arise, when platforms fight to give more content to their subscribers, but are also trying to reduce the cost of their subscriptions. Even if there is this kind of golden age, it is still a golden age.’

By definition, golden ages fade away.

But that slow armageddon is simply not happening. Said Pelinard-Lambert, ‘At at the same time, when you are asking commissioners, or platforms or traditional players, they are asking for more. You need to feed the beast, but the beast is not completely fed.’

The American push into Europe

As the US streamers build their own niches in Europe, they confront the unwelcome reality of regulation. The European Parliament is carrying out its threat to ensure that 30% of their content has to be locally produced. At the main Series Mania in August, HBO, Disney+ and HBO Max held keynotes, and announcing well over fifty new commissions.

Just a few weeks ago, said Pelinard-Lambert, ‘in Europe, they were all having at least 30%, or 40% of their commission based on very known properties, either books, previous films, previous series or famous names, that would be able to carry some kind of image recognition for marketing.’

Channel Four is being privatised, the BBC is under assault from its own government, and the Brits are no longer included in pan-European deals. Indeed, one of the reasons why the EU has passed restrictive legislation is to keep English productions out. As a result, the Brits are doing more business with the US and their shows have become more Americanised.

Around the world, the earlier pioneers are seeing a demographic change. They started by tempting younger audiences with teen dramas and sci-fi, but are now commissioning more adult content as those subscribers age out of those tastes. Amazon, for instance, is rebooting Packed to the Rafters in Australia.

We are also seeing an artificial shortage created as the major studios set up their own exclusive streaming services so the older services need to find replacements. We now know which classic shows are really valuable, and we have seen fierce bidding wars as rights deals expire and beloved properties are wrenched away from their familiar homes.

All this is creating a fascinating pressure on local and regional players, particularly the public broadcasters. They need to be more daring.

This leads to a kind of swap, with Netflix and Amazon wanting that more staid material which the smaller players lived on five years ago, while public broadcasters et al are taking up youth-focused programs. Sci fi, for instance, ‘is no longer the private property of the big platforms’. Mind you, he acknowledged, the budgets are much lower.

They will still be under pressure to do big shows, but, ‘when you are producing locally, you’re producing with something that can be understood, and can be recognised immediately by your local audience, because you want to be seen as a local player.’

The baseline budget for a regular prime time show in Europe is roughly one million euros per hour, topping out at four million, but with very large shows at six million. Budgets are climbing because agents are pushing valuable talent into television as the film business stalls with Covid. ‘Big names are now everywhere.’

The result is financial turmoil. Pelinard-Lambert is reporting on a new production company, or a sale or merger or first look deal every day. It is easy to start a production company, it is enticing, and the finance is readily available. At the same time, the bigger companies are buying each other, and harvesting the indie companies. Everyone has some kind of attachment to a major player.

Public broadcasters are leading the trend to joint ventures and co-productions across Europe, to stitch together budgets to match the larger corporate players. ZDF, France Televisions and the Italian RAI have formed The Alliance, a joint venture to make over forty shows in five years, averaging between two and four million euros/episode. The physical market is coming back to life, as production partners need to make real human contact as they make deals which are complex, vital and require a lot of trust.

In the last few years, production markets like MIPCOM have been drooping a bit, as the market matures and more deals are set up online. But now they are back on centre stage, pumped up by that need to replace the content sequestered by exclusive deals, and a host of new players eager to establish themselves in this expanding market.

‘People are absolutely open to co-productions, and most of the original platforms are doing a lot of co-pros,’ said Pelinard-Lambert. ‘Viaplay is a Scandinavian platform which is really successful and has launched worldwide. 60% of the commissioning is done with foreign partners.’

Selecting the right distributor is even more important. ‘There are a lot of independent distributors,’ he said. ‘They are getting bigger and bigger because the large companies like Federation or Fremantle are representing world wide [rather than territory by territory], or representing the production companies in their group, so they are not going to be selling on behalf of independent producers.’

So the independent producers need players who are hungry, who will take on a challenging sell. German company Beta Film, for instance, has built an amazing catalogue which comes from all over the world. Doing business with British companies is more difficult, as the Europeans note a national capacity to feel superior and lecture their partners.

The curse of lifestyle television

Selling into a global market is complicated by the way in which different cultures and broadcasters use their content. Cooking and dating shows in Australia are stripped across the week while the the Europeans run them once a week. To Pelinard-Lambert, the dominance of reality TV and games shows in Australian television is staggering, and brings a difficult problem for producers.

I am a little surprised that the television industry in Australia doesn’t quite know how to defend its own interests, even if it can be quite loud. I would say it is not vocal enough, especially around the level of production by local broadcasters. They need to do more. And I can’t understand why they don’t.’

Those shows don’t travel, because they are appointment viewing, and they don’t work unless you don’t know the outcome. A European outfit like the French equivalent of Channel Nine was tempted into studio shows, but ultimately stuck to three original dramas per week, which have much better sales and format opportunities globally.

As long as we are caught by this addiction, the international market will get harder as we are swamped by eager producers backed by cultures which do produce drama at the necessary scale. To Pelinard-Lambert, ‘I am a little surprised that the television industry in Australia doesn’t quite know how to defend its own interests, even if it can be quite loud. I would say it is not vocal enough, especially around the level of production by local broadcasters. They need to do more. And I can’t understand why they don’t.’

We all know that the reasons why are very sad. Murdoch lurks like an evil toad, and the voters don’t seem to respond to the cultural argument.