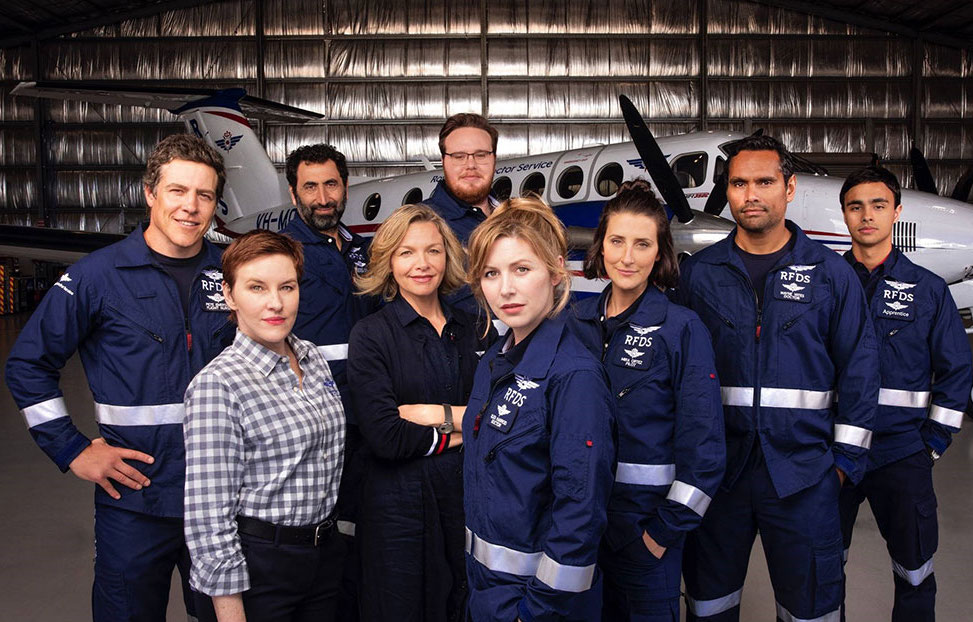 Why does RFDS sell to the world? Francois-Pier Pelinard Lambert has a definite view

The wonderfully named François-Pier Pelinard-Lambert is the editor-in-chief of Le Film Français and the international consultant for Series Mania, the Woodstock for lovers of TV series. He was interviewed by Sandy George as part of the 2021 Industry Day in the Australian version of Series Mania, run online through Melbourne’s ACMI, with Le Film Français as the international media partner.

Australian shows are flourishing in the marketplace

According to Pelinard-Lambert RFDS is selling well and Unusual Suspects has been presold all over Europe, with more deals to come at MIPCOM. ‘The common theme in the show is it is centred on female characters, and this kind of female empowerment in the series universe is really one of the big trends,’ he said.

‘You had a very interesting local background, the bush with RFDS and the culture clash between the Filipinos and the socialite in Unusual Suspects, which in a way can be translated in many countries in the world. And you had this kind of female chemistry in Unusual Suspects, with a ton of comedy and a lot of energy on RFDS, which is in a way a medical drama setting an amazing landscape. I wouldn’t say those two shows were easy to sell, but they’ve got a lot, and I’m not surprised by the success.’

If he was an Australian producer, how would Pelinard-Lambert work globally?

‘I would say that I wouldn’t try to copy anything, I would try to be as as local as possible, as close to your own personal history, and find themes that can resonate worldwide.’ Mystery Road, now in its third series, is a good example. ‘On paper it is a very slow show happening in the bush where hardly anyone in the world knows exactly how it works, with 90% of the cast being Aboriginal and it is also quite funny. At the same time, the show is travelling world wide.’

Dare to be original

‘There is a murder, which you are solving, and you’re discovering landscape, you’re discovering all those social connections between the characters, and you’ve got exoticism and the prime rules of a good thriller. Some channels were circling around saying “Oh, but it’s too slow.” I explained to them when you’re living in an environment where it’s 45 plus degrees Celsius plus, and you’re always surrounded by mozzies, you can’t run like crazy, you can’t. Everything is there is a kind of slow motion, it’s the nature of the life in the bush.

And actually, they were already showing a lot of shows from Scandinavia, and they call them the slow burn shows, and they said, “It’s even slower than these Scandies,” and I say, “Yes”. And the two earlier seasons were the highest rated foreign shows on update.’

He used the example of Squid Game, doing huge numbers even though it comes from Korea, a culture which is hardly seen outside Asia. It does not have the marketing power of an American show or a Western indie.

Read: You should watch… Squid Games

‘Firstly, it is a very good show. It is a very good thriller and very violent, but it is not done in an American way. People used to those rules will be surprised by the way that this tension is maintained. They are playing by their local rules.’

The impact of Squid Game is nothing short of extraordinary – and disconcerting. While, as Pelinard-Lambert acknowledged, Korean shows had been ignored in the West, Asian markets already saw Korea as a production powerhouse.

At Screen Forever in April 2021, Sophia Mavros, the Senior Researcher, Consumer Insights, Asia Pacific for Netflix, discussed the company’s interest in Korean drama, and demonstrated how it had plugged into the possibilities before any of us had even heard of Squid Game.

‘When Netflix launched Netflix Everywhere five years ago, we invested in thousands of Netflix local originals, most of which have been commissioned by local content executives that deeply understand the language and the culture of the market,’ she said.

‘Between the years of 2015 to 2020, our investment in Korean content reached 700 million US dollars with more than 80 shows that have been made in Korea, but watched by audiences around the world.

Sandy George pressed him further on the question of genre.

He reported ‘a kind of thriller fatigue’, in which the cop show or whodunnit is giving commissioners the irrits. But they can’t win because the public still loves them, so they are morphing into historical dramas or comedies. There are plenty of original strategies available, so they are still central to the business.

‘Spy shows are growing in value, like psychological/mental illness stories, like the Australian show Wakefield, also released in the UK. There are many other Wakefield-like shows. They come from so many cultures, it seems there is a concrete need to tell these stories. It is probably the most interesting trend I’ve seen in the recent months, these questions of how am I dealing with a cycle of family issues, with very intimate stories that can resonate worldwide? A lot of players can’t put a lot of money on the table, but when a very intimate story is well told it travels worldwide.’

In the International Series Mania program, Wakefield was described as, ‘The crossover stories of the patients at the Wakefield hospital, Nik, the most empathetic of all nurses, and the rest of the staff, more than often beset by doubt… Nothing really depressing, though. On the contrary, it is  funny, moving, sweet… a beautiful Australian gem.’

Wakefield is a Jungle production in association with BBC Studios so it is both inherently Australian and also international. US premium cable network Showtime has acquired it for the US. The star is Rudi Dharmalingam, a significant British actor in stage and screen.